KUALA LUMPUR (Nov 28): High risk, high return — the investing rule of thumb. But investors who have the stomach for high investment risk to penny stocks may also need to act quick enough to part with their shares to yield high returns.

The roller coaster rides that the penny stocks have had recently might be the proof.

K-Star Sports, which will soon transfer its listing status to a new company (NewCo) called Sinaran Advance Group Bhd via an internal reorganisation exercise, is the second top loser by percentage for the week. The company’s share price shaved by 38% to close at 32.5 sen on Friday, with 328.3 million shares changing hands during the week.

The stock was indeed a star performer early of the month, the week after the company signed a memorandum of understanding with Kanger International Bhd to distribute the latter’s healthcare products. Its share price jumped 111% to 92 sen in the first week of November from 43.5 sen on Oct 30. However, the rally failed to gather steam. K-Star’s share price took a nosedive. The stock did not only pared down all its gains, it dropped further losing 29.3% MTD.

According to the filings to the stock exchange, there were roughly 20.7 million of new K-Star shares listed as a result of warrant conversions since October. 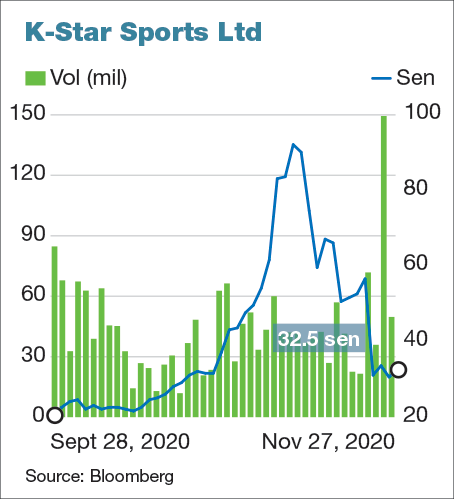 K-Star is undertaking a special issue of new shares which will be placed out to independent third parties to be identified by the company. The number of shares to be issued, however, has been reduced to 142.097 million from 222.81 million shares originally.

Upon completion of the special issue, the third parties will collectively control 33.3% of the company. In September, both ACE Credit (M) Sdn Bhd, which held 24% stake, as well as Datin Tan Siew Ching ceased to be substantial shareholders. Meanwhile, Honing Kong-based Oriented Media Holdings Ltd emerged as a substantial shareholder with 19.77% stake.

On top of that, the company intends to conduct an employee share option scheme (ESOS) of up to 15% of the company’s enlarged share capital after the transfer of listing to the NewCo and special issue of share. The ESOS is for the employees as well as executive and non-executive directors of Sinaran Advance and its subsidiaries, said K-Star in the announcement to Bursa Malaysia. 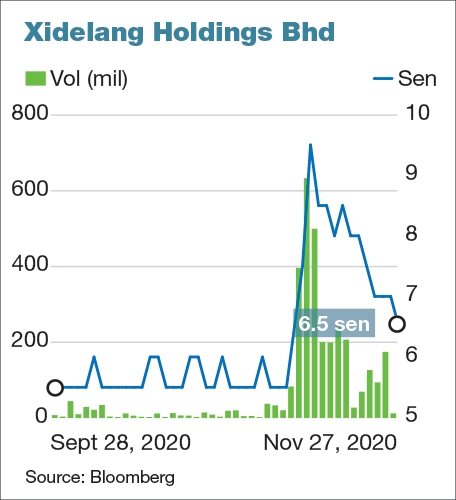 Both Xidelang and mTouche, which joined the ranks of top actives this week, also saw short-lived gains and were now up 18.2% and 70% respectively. During the month, before the counters have pared some of its gains, Xidelang had risen by 73% to 9.5 sen earlier this month, while mTouche had surged by 130% to the peak of 11.5 sen seen last week. 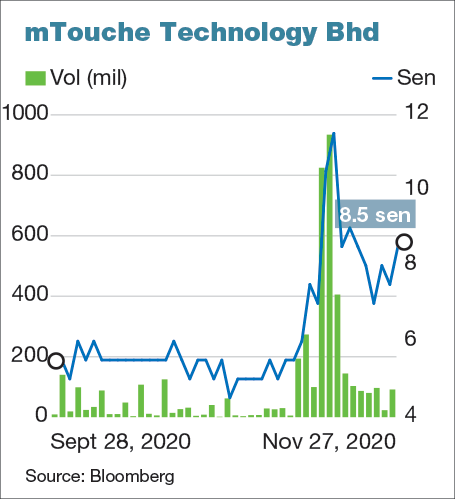 Likewise, mTouche also offers ESOS to reward its employees and board of directors. In the filing to Bursa dated Oct 16, the company disclosed that the offer of 25.08 million shares at an exercise price of 5.5 sen per share. The company later announced that a block of 25.08 million shares as a result of exercise of ESOS were listed on Bursa on Oct 23. 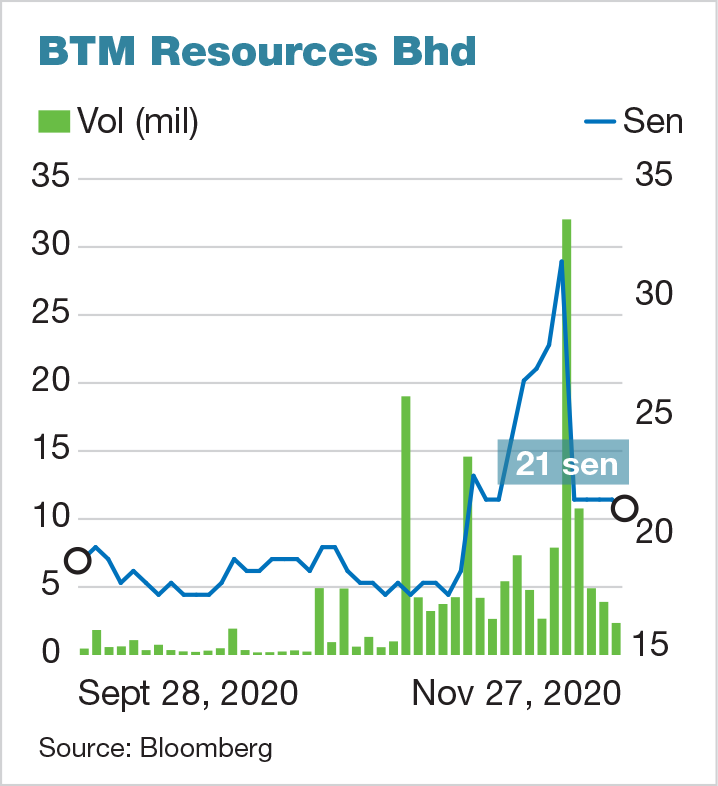 Top three losers by percentage this week, BTM Resources fell by 33.33% to close at 21 sen. According to the company’s filing to Bursa, BTM Resources completed its private placement of 14.13 million new shares at 16 sen. The block of shares were listed on the stock exchange on Oct 26.

The stock rallied 75% to 31.5 sen within the three-week period of November before the nerve-wracking fall from the peak. MTD, the counter is up 16.7% MTD. 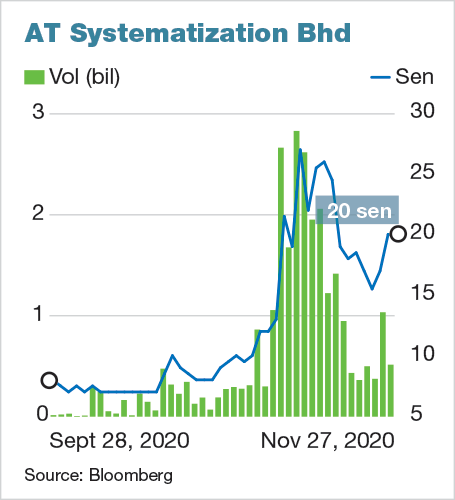 There are only six stocks whose trading volume exceeded one billion shares the past week. AT Systematization and Vivocom are among the six.

Although AT Systematization’s volume shrunk substantially to 2.79 billion shares from last week’s 6.08 billion shares and over 10 billion shares two weeks ago, still the stock remained as the most actively traded counter on Bursa Malaysia for the week.

The upcoming glove maker share price climbed steadily from 10 sen at the start of the month to five-year high of 27 sen on Nov 11 on soaring trading volume thanks to the hype on social media the company’s earnings potential as it starts producing rubber gloves. The trading volume is far higher than the glove companies which are already making super profit from the current strong demand globally.

Soon, it lost the upward momentum, sliding to 15.5 sen on Nov 24. Nonetheless, the counter managed to recoup some lost ground to close at 20 sen on Friday. 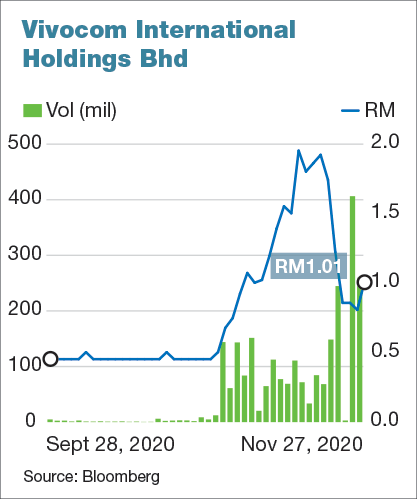 Vivocom, which is in the midst of acquiring property development assets, is the fifth most actively traded counter with 1.06 billion shares done this week. However, the company is also among the top percentage losers of the week, its share price plunged nearly 42% to close at RM1.01 from RM1.74 the week before.

Vivocom’s share price rocketed 290% to RM1.95 from 50 sen earlier this month in just two weeks after the completion of share consolidation exercise. However, two-third of the gain evaporated in the past week.

That said, for the month of November, Vivocom is still a star performer in terms of share price as the stock is up 102% month-to-date (MTD). Furthermore, it leaped 573% from 15 sen year-to-date (YTD). 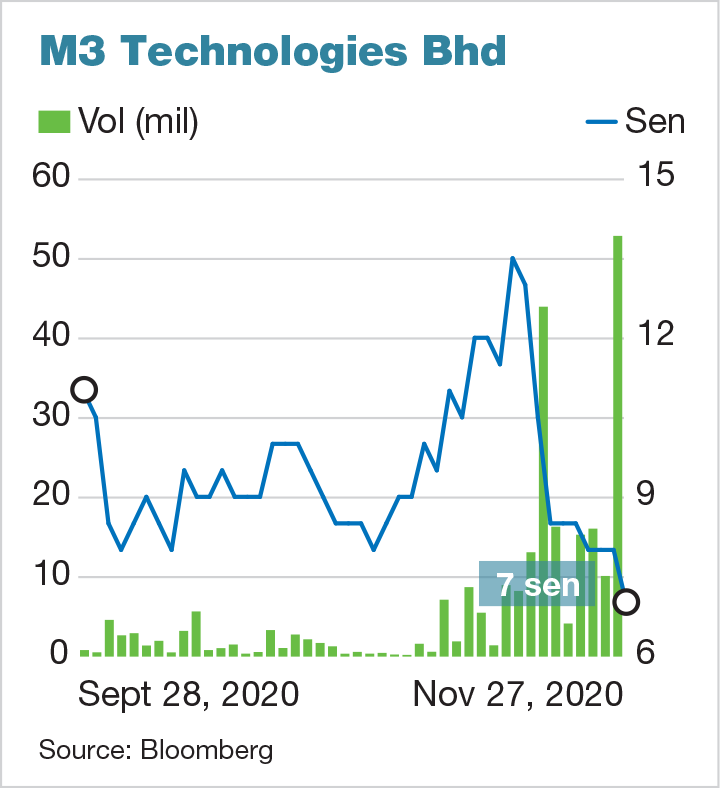 Similarly, M3 Technologies shot up by 69% to 13.5 sen at mid-November, before it fell and was down by 12.5% MTD. This week, it shed 17.65% to close at seven sen. The company has obtained the regulators’ approval on its private placement of 128.54 million shares. 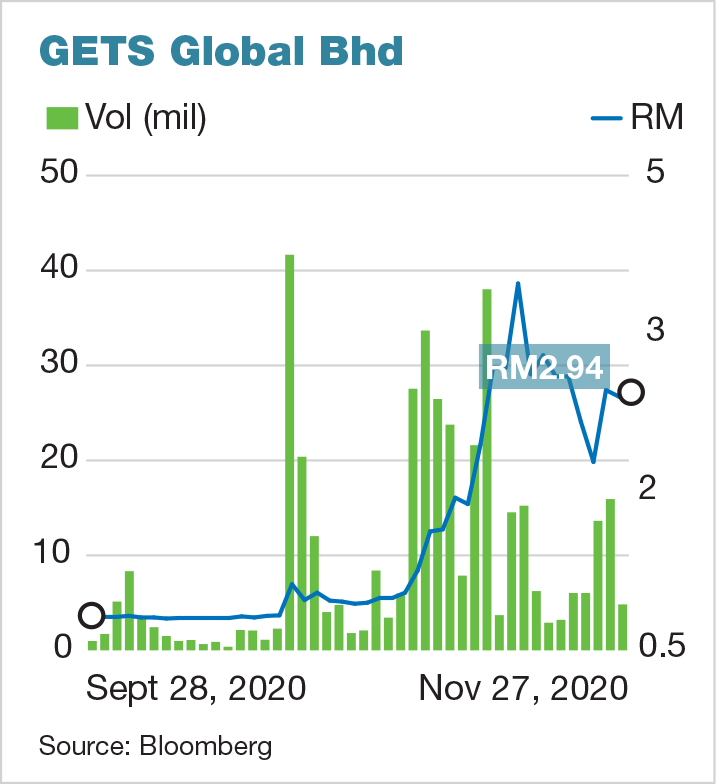 Bus operator GETS Global, albeit not on any of the top active, gainers or losers list this week, also replicated the same trend. It had soared four-folds within the first two weeks of November but pared some of its gains and now was up 197% to close at RM2.94. Bursa has warned investors to exercise caution in the trading of shares.