One of the popular ways to raise funds for a listed issuer is via private placement of shares. Of course, to do so, the listed issuer would have to first obtain the mandate of its shareholders as required under Section 75 and Section 76 of the Companies Act, 2016.

In addition, the LR also spell out the manner in which the shares will be priced, which is at not more than a 10% discount to the weighted average market price of the shares for the five market days immediately before the price-fixing date. 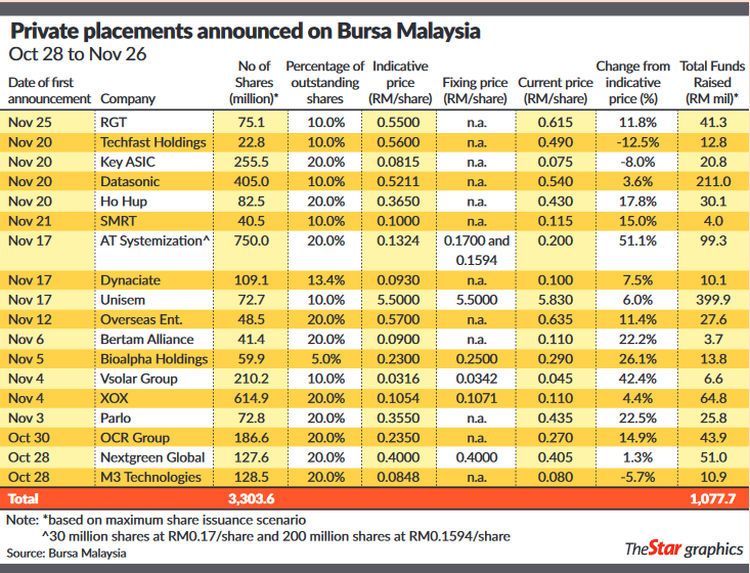 Also, shares that are placed out must meet certain criteria, which is defined under Schedule Six or Seven of the Capital Markets and Services Act, 2007.

In addition, details of placements that are made to these placees must be made to Bursa by the company’s principal advisor (PA) detailing out names, home or business addresses, identity card/passport/company registration numbers, occupations/principal activities and securities account numbers of all the placees and the ultimate beneficial owners of the securities placed and the amount and price of securities placed to each placees.

The PA is also required to confirm in writing that information provided to Bursa Malaysia is accurate and in accordance with Chapter Six of the LR.

Of course, corporates undertaking private placements will need to detail out the rationale for their fund-raising purpose as well as utilisation of proceeds from the exercise to be carried out, the effect of the private placement on issued share capital, changes in major shareholders’ holdings, impact on net assets and gearing as well as earnings and earnings per share.

How many shares can a listed issuer placed out? Due to Covid-19 and to help companies to tide over during this difficult period, Bursa Malaysia had announced on April 16 this year that under the “Additional Temporary Relief Measures To Listed Issuers (ATRM), ” a listed issuer can now increase the general mandate threshold for new issue of securities from the existing 10% to not more than 20% of the total number of issued shares (excluding treasury shares) subject to compliance with applicable legal requirements and its constitution.

In addition, a disclosure of its board of directors’ views that the 20% issuance is in the best interest of the listed issuer and its shareholders must also be made.

The 20% mandate must be approved by shareholders in a general meeting and may be utilised by the listed issuer to issue new securities until Dec 31 2021. The 10% limit under the LR will be reinstated after the end of next year.

Hence, listed issuers have a small window of opportunity to raise funds quickly and within the guidelines provided by the authorities for a period of about 20 months.

This has led to a flood of applications among listed issuers and over the past one month alone, we saw the following companies making their first announcements, targeting to raise as much as RM1.08bil from the issuance of more than 3.3bil shares to investors.

Table 1 summarises the list of 18 companies that have announced private placements in the past month.

Since these announcements were made, one thing that comes to mind is the impact on existing shareholders in terms of the dilutive impact, potentially lower earnings per share as well as impact on net asset value.

However, judging from the share price action of the 18 companies that have announced their intentions to raise funds via private placements the past month alone, only three companies have the current share price trading at the level lower than the indicative placement price at the time of announcement. Price of these companies are lower by between 5.7% and 12.5%.

Fifteen other companies have seen the market price of their company shares being higher than the indicative issue price by between 1.3% and as much as 51.1%. On top of it, five of them have actually fixed the issuance price of the placement shares and out of the five, four of them have actually fixed the placement price to be higher than the earlier indicative price.

Does this imply that shareholders are indifferent to placement issues and in fact are “happy” to see listed issuers going to the market to shore up their respective balance sheet, without “burdening” current shareholders with a cash call? That seem to be a logical conclusion since most existing shareholders would likely shun a rights issue exercise, even with a big discount thrown in.

The second issue on private placements is the amount of funds that are being raised. Table 1 shows the total potential funds to be raised ranges between as low as just RM3.7mil for Bertam Alliance to almost RM400mil for Unisem. In fact, three of the placement exercises proposed involved a fund-raising exercise of just under RM10mil. The reason for the relatively low amount of funds raised by these companies is simply due to low market prices of their respective shares. One-third of the companies listed on Table 1 are raising funds based on indicative share price at either 10 sen or lower and half three of these are raising based on the maximum 20% allowed under the ATRM.

Another point that is of significance is that with added new shares in the market, some of the issuance are huge due to the already large share base. For example, in the case of AT Systemisation, the company has some 3.75bil shares outstanding and is now proposing to issue up to another 750mil shares, bringing its enlarged share base to 4.5bil shares. Other companies in the billion shares club include Datasonic at 4.46bil shares; XOX (3.69bi shares); Vsolar (2.31bil shares); and OCR Group (1.12bil shares).

With such huge quantity of shares, it is of no surprise we see some of these companies tend to be heavily traded with companies like AT Systemisation taking the lead of having as much as 2.83bil shares changing hands in a day, which translates to a mind-boggling figure of 87% of its total shares outstanding as at Nov 11.

While Bursa Malaysia strives to see velocity of the market rising and higher turnover on a daily basis, both in volume and value, there must be some sense of market price movement and volume that is traded. The issue with some of these highly traded stocks, which by the way are also in the list of companies going for private placement exercises, is the relatively low market prices. Assuming a company with a market price of just 4 sen per share, one bid movement up or down is a 12.5% swing in percentage terms. A trader or investor is able to make or lose money in just one bid movement as most of these trades are done in large quantities. This makes all these micro penny stocks, a term defined by this column, as shares that are traded less than 10 sen per share, nothing but highly volatile.

To overcome this, regulators should look into potentially introducing a Minimum Trading Price (MTP) rule whereby rules are put in place for companies to regulate the shortcomings if their share prices fall below a certain threshold and given a certain time frame to do so. Other than a share consolidation exercise, which can easily reduce the number of shares outstanding with a correspondent adjustment to the share price, companies should be focusing on improving the fundamental values of their shares in order for the market to correctly price these companies.