Home anarchysons HIBISCS Why we bet on HIBISCUS PETROLEUM (HIBISCS, 5199) as oil makes a comeback in 2021?

The time to buy is when there is blood on the street.

Oil, which has been listless over the last five year, is showing signs of awakening. Oil and gas stocks are dirt cheap. The worst performing asset class during one period often becomes the best when the tide turns.

Sure, renewables are hot, and here to stay. Ask Europe, China or any developed nation.

The global economy is slowly switching power sources, moving away from greenhouse-gas-emitting fossil fuels toward cleaner and renewable alternatives.

With every oil major diversifying into renewable energy and countries rapidly increasing their investments into hydroelectric, solar and wind power, it's no wonder that the International Energy Agency sees renewable energy generating capacity growing by another 50% through 2024 under its base-case scenario.

In September, China pledged to stop releasing carbon emissions before 2060, which catapults it ahead of U.S. ambitions on climate change and instantly alters its status as the world's top emitter within 40 years.

Exxon Mobil's share price has more than halved on a year to date basis.

Brent crude oil has stabilised at US$40 today.

Surely, the days of oil going back up to US$100 are over.

While that could be true, what is undeniable is that at US$40, oil is at one of its LOWEST LEVELS over the last two decades. 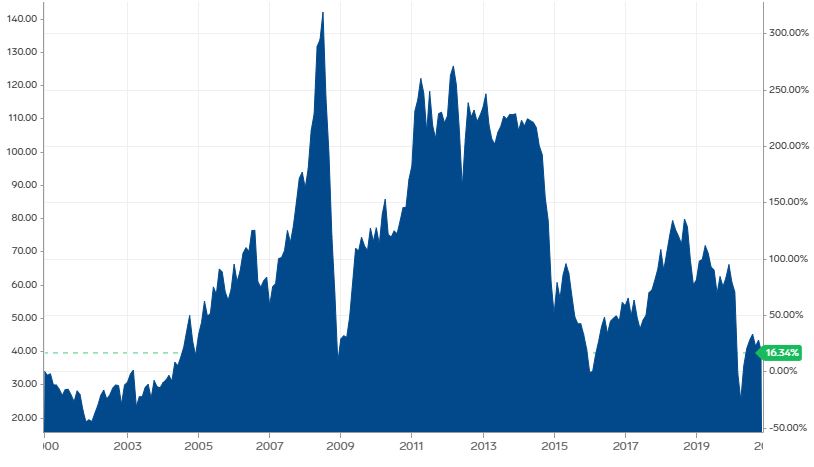 Oil's depressed price could be due to these reasons:

After a long draught, oil prices to recover

Now while we aren't saying oil is going back to its heyday, its downside is very limited, and its chances of rising up is a lot higher.

With global capex more or less halted and the pandemic further crippling demand, oil is perhaps at its bottom.

When the global economy does recover sometime in 2021, and consumer demand eventually normalises, surely oil prices will also rebound

It is for some of these reasons that Goldman Sachs in October came out with a report predicting a surge in the price of commodities over the 2021-2025 period.

It says that predicated on a rebound in gasoline demand and constrained shale supply, US oil prices could rise to US65 per barrel by late next year.

The bank further feels that the prospects for fossil fuel price rises are potentially higher under a Biden win.

An interesting trend of the last six years, is that each time oil prices took a dive, this always sparked some kind of mergers and acquisition activity in the oil space.

Here are some examples:

In a nutshell, these companies took the OPPORTUNITY to acquire assets when they were selling at significantly CHEAPER prices. Ultimately this improved their reserves and daily production volumes which made them significantly larger companies.

Now lets look at a REAL Malaysian oil company that made acquisitions during distressed times. 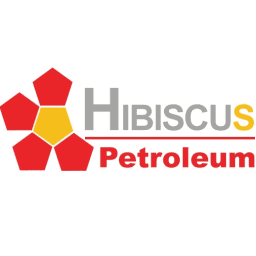 For the record, Hibiscus has ZERO DEBT and is a NET CASH company.

While it recognized an impairment of some RM187.7mil in its latest quarterly results, take it out, and the company roughly generated profit of RM166mil for its financial year ended June 30, 2020.

These are in Malaysia, the United Kingdom and Australia.

This portfolio came about through acquisitions.

It acquired 50% of the Anasuria Cluster in the North Sea for US52.5mil back in 2015 when oil prices were around the US$35 mark.

Now when it first announced the acquisition of North Sabah, Hibiscus' share price was at the 20 sen level. Oil prices were at the US$35 mark.

As the deal was completed in March 2018, and with oil prices recovering to the US$80 level, HIbiscus' share price shot up to 90 sen.

Thus for investors who had bought Hibiscus at 19 sen when the deal was first announced, the share price had gone up some 4 TIMES, by the time the deal was completed.

History is about to repeat itself

As we all know, Hibiscus is currently on a major fundraising exercise, and is looking to raise up to RM2bil in equity to fund a TRANSFORMATIVE ACQUISITION that is bigger than Anasuria and North Sabah combined.

Presently based on Hibiscus' 50% stake in both the Anasuria and North Sabah cluster, its share recognizes some some 9,500 barrels per day in both assets combined.

This is also set to change as based on Hibiscus' latest announcement to Bursa on Nov 2, its infill drilling development campaign has added an instantaneous incremental 2,200 barrels per day of crude oil production and added approximately 4 million stock tank barrels of incremental life of field gross reserves.

With this new development, Hibiscus would thus be producing some 10,000 barrels of oil per day from Anasuria and North Sabah.

Assuming Hibiscus is raising debt almost equal to its equity position for its new acquisition, it is very likely that the target company has production at least 4 times of what Hibiscus is doing presently.

So why do we think Hibiscus is a good investment?

Hence we are buying a company which is NET CASH, has HUGE MARGINS, roughly makes operating profits of RM150mil status quo, and is on the cusp of a MAJOR acquisition.

You heard it first here.