In the beginning of December I started a series of articles, analyzing the different factors affecting the future profitability of Top Glove. You can read the first two parts of the series here:

Factor 1: Vaccine and End of COVID-19

Up to now, the conclusions we have reached, based on available evidence, are:

1) An insufficient quantity of vaccines will be available by the end of 2021 to put a final stop to the COVID-19 crisis by the end of next year. The crisis will very likely continue on into 2022.

2) Top Glove will continue to report extraordinary financial results by the end of FY2022 (August 2022), even if the COVID crisis ends at the end of CY2021.

One factor that is analyzed to a lesser extent is what would happen with the company and with general demand for gloves beyond the crisis. it is never easy to predict the future, especially while we are in the midst of a crisis. At present, we can rely on officially available data and trends to give us a rough idea of what we could expect.

Many countries in the world have strategic stockpiles of medical equipment, including personal protective equipment (PPE), they could use in cases of sudden, unpredictable crises like the current one. We will look at only the most important players for brevity. Note that these are the countries with the highest purchasing power and therefore likely the countries best prepared and best stocked with the necessary PPE.

The United States has a Strategic National Stockpile (SNS) under the Department of Health and Human Services (HHS). According to a report prepared by the US Government Accountability Office (GAO) and published on 30 November 2020, the national stockpile of nitrile gloves currently stands at 2 million pieces, while the planned 90-day inventory is 4.5 billion pieces. In other words, at present the United States has only 0.05% of the amount of nitrile gloves it needs as part of its strategic stockpile. The HHS estimates that the current demand is 8.7 billion pieces per month, or 104 billion pieces per year. What is more worrisome is that in October, Paul Mango, Deputy Chief of Staff for Policy at HHS, said that the agency had procured 700 million pieces of gloves that were supposed to be received in the next weeks. However, in November GAO reported that a contract (assuming the same one) for delivery of nitrile gloves was not fulfilled because "the subcontractor sold them to another entity." In other words, an actual war for gloves is waged on the international markets. The problem appears to not be serious just at federal level, but more locally, too. New York City mayor Bill de Blasio reported in November that the city has 30.4 million pieces of nitrile gloves out of estimated 185 million pairs the city needs for a full 90-day supply, or only 16.5% of its needs. The United Kingdom, which will not be a part of the EU after 1 January 2021, has a Pandemic Influenza Preparedness Programme (PIPP). The Department of Health & Social Care estimated in April that throughout the pandemic, 19.6 million pieces of gloves would be needed per day. The total number of stockpiled pieces of gloves in both the PIPP stockpile and in the separate EU Exit stockpile amounted to a total of 331.3 million pieces as of January and February respectively - enough to sustain the country for 17 days (Source). There is no recent source of data in regards with the current stockpile. A recent survey conducted in Japan found that 60% of hospitals are experiencing shortages of medical gloves, while 93% are concerned that the situation has reached a crisis point. The health ministry of the country will conduct a survey on demand and imports of gloves by the end of the year (Source). In the meantime the Australian Dental Association issued a list of recommendations on how dental practitioners in the country could conserve gloves (Source).

Overall, it may be safe to assume that strategic stockpiles around the world have been depleted, and it will likely be only in the years after the end of the COVID crisis that there would be enough free quantities (i.e. non-current use quantities) of gloves for these stockpiles to be replenished.

The other question that bodes answering is where the increase in demand over the longer run would be the highest. While advanced economies would have to replenish their stockpiles post-pandemic, the actual current consumption of gloves may rise most rapidly in some of the developing countries. According to information shared by Hartalega (based on data by MREPC, 2015) and Top Glove (based on data by MARGMA, 2018) there is a large disparity between the per capita yearly consuption in different countries:

In other words, the per capita consumpion in developing Asia is between 16 and 80 times lower than the per capita consumpion in the developed parts of the West. Having in mind the very low starting point from which demand in Asian developing countries will grow post-pandemic, it is likely that these would be the markets that would drive the biggest percentage of added demand over the next many years. Thus, companies with heavy presence in these markets may benefit more than companies relying predominantly on developed markets. In the case of Top Glove, 22% of its sales for FY2020 went to the US, 17% to Western Europe, and 8% to Japan, with the remainder (53%) going to developing and emerging economies. This is up from 50% of sales going to developing countries in 2019, with the main difference being a drop of 5% in sales to what appears to be the most matured market (i.e. the market with the lowest growth perspective) - the US (Source). 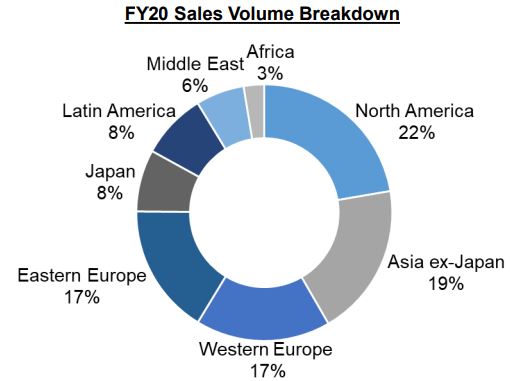 While accurate figures are extremely hard to be derived from the current publicly available data, two things appear to be certain post-pandemic in regards with catalysts of demand growth for gloves:

1) Countries, especially advanced economies such as the US, EU, and Japan, will have to replenish their strategic stockpiles of medical gloves. This could only happen in the period after the COVID crisis when demand, prices, and current availability will have started to normalize.

2) Developing countries will start from a very low point in their per capita consumpion of gloves - as much as 80 times lower than the consumption in advanced countries. With enhanced hygiene awareness and official requirements, this is prone to change post-pandemic.