What to expect in terms of valuation for the gloves makers

What to expect in terms of valuation for the gloves makers


During this pandemic, the gloves makers have made so much cashflow that it has not seen such money in their business lives. As an example, Top Glove just made net cashflow of RM2.8 billion based on its latest quarter alone. As a comparison, a similar quarter ending 30 Nov 2019, it was generating negative free cashflows. 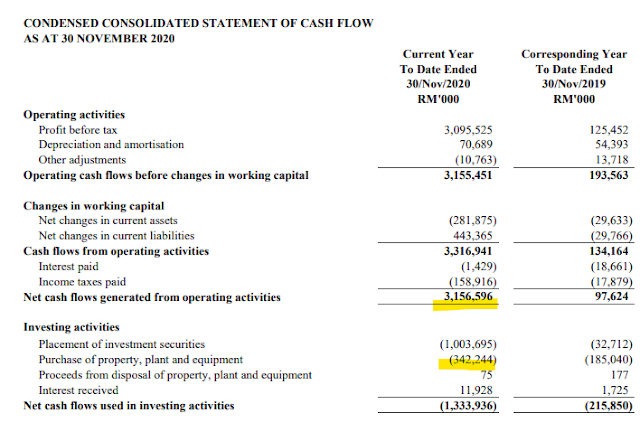 Based on their own projections, prices or Average Selling Price (ASP) for gloves are still on the uptrend so much so that it is estimated that it will not be impossible for Top Glove to make as much as RM15 billion a year, possibly much of them would be net cashflow. Other gloves makers especially the Big Four including Hartalega, Kossan and Supermax are also enjoying such numbers albeit smaller net cashflow as against Top Glove due to their lower capacities.

After the shocking COVID-19 event which basically caused havoc to the world for almost the entire 2020, it is very difficult to project what would entail for 2021. Will we be able to deem some time around 2021 to be post-pandemic era?

What we possibly foresee is that the number of COVID patients will not reduce in the next 3-4 months especially during the winter season. At the same time, many countries - Malaysia included will not be getting vaccine supplies until at least March 2021.

Several developed countries which have the potential to control the vaccine supplies through their manufacturing and production base will potentially be able to get half of its vaccine supplies by mid 2021. The report for vaccine seems promising but how will it affect the gloves makers come 2022. It is very much an unknown.

From reports, it is provided that the stocks for gloves for many is less that a few weeks. I would think that due to the demand is surpassing the supply by a tremendous amount at the moment, some countries may not have ample supply of gloves. Companies especially the large gloves makers have been able to sell some of their produce at spot prices - which at the moment is through the roofs. I would think it would be richer countries and those that needed the supply of gloves the most urgent would have to resort to spot purchases.

For the gloves makers on the other hand, the ones that are able to sell at spot prices would be the ones that do not have their supply committed to a particular buyer. That is why we see the first few months some of the players are not enjoying as high a profit as we see now. Potentially we have yet to see the best quarters yet among the gloves makers as reporting is about few months late from the actual transaction occurred.

How do we then evaluate the valuations of the gloves makers then? Many reports that I read take average of 5 years projections and compare them to past valuations. As an example, they would take the average of net profits for 2020/2021 until 2024/2025 and compare to the previous valuations that are usually given to gloves makers. As an example, if the glove sector is provided with 25x PE on average, they would take the projection numbers for the next 5 years and multiply by the past PEs.

I think this is not the correct method. Why? This is because the numbers for gloves makers now would be very different from the past 5 years. FY2021 and FY2022 numbers alone for Top Glove would be more than what they would have made in the past in aggregate. The correct method is to try to project the future cashflow albeit it being very difficult to project. Try doing it over the next 40 years.

While demand will far outstrip supply, there will be a period in the next few years where that supply numbers will be in parity to the demand. Perhaps by then the total production of gloves would have doubled the current supply todate. Still it is worth a try to project. Well, I did that.

Based on that method, I think Kossan and Top Glove are the most attractive priced and they may still be at the notch of being undervalued. Why? Kossan at RM5 (or RM12 billion) is the cheapest in comparison to its potential profits. Top Glove on the other hand because of its sheer capacity, it will benefit from being able to sell the most at spot pricing and it will enjoy the most due to its excess capacity as compared to the rest.

Hartalega, while it is the most efficient glove maker all the while, because of this pandemic, its advantage is diluted. At valuation of (RM12.40 or RM42.43 billion at the moment, I think it is the least attractive.

Supermax is the hard one as it is selling using the Original Brand Model where during times like this, it will enjoy the most margins. It is however hard to predict for how long it will enjoy those better margins and that also depends on the demand in the future. If we notice, it was the one which was least profitable in the past.

On the other hand, I agree for the gloves companies to do share repurchases (despite apprehensions from some press) as besides paying dividends what would these companies do with the huge excess cashflows. By repurchasing its own shares, it would be able to at least reduce the volatilities as everyone is trying to project the valuations of the stocks and I believe the onus is onto the management to know what is best. Also, I do not think they do it to support their own share prices as they have so much money this year for them not to support their own wealth.