Home business GameStop Top Glove Short Squeeze: Who is Right Who is Wrong

GameStop Top Glove Short Squeeze: Who is Right Who is Wrong

By now almost every news either online, daily or weekly, they would have mentioned something about GameStop. Personally, I have never heard of this company before prior to this. The thing about this event is that it created a movement where seemingly for once the small guys have gotten ahead of so called the bad guys - which is the Wall Street guys.

If we look at the price chart below on GameStop - Never in my life I have seen stocks moving in this kind of trajectory over my 30 years of investing life. The thing about this story is that GameStop did not discover gold, oil or have gotten a cancer drug approved. It is a company actually suffering from the current behavioral challenges as gaming has now moved into online and homes from its traditional distribution channel. 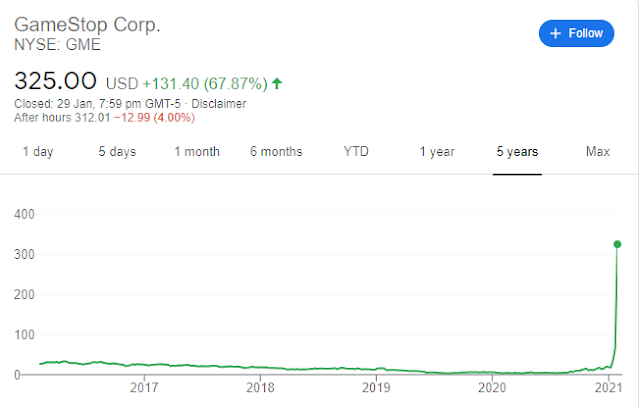 The story about GameStop is pure adrenaline, power of social, smartness of some and ignorance of the new batch of retail investors combined. Adrenaline is because of the hate towards Wall Streets where the community had never liked Wall Streets and they wanted a way to get back. Obviously, it was further pushed by several social media evangelists. The funny thing is that people like Chamath Palihapitiya, Elon Musks themselves do not really belong to the Main Streets group but they did inspire these new investors to jump in. The new group who do not clearly understand the meaning of valuation and business and investments. They are just followers.

In Malaysia, a similar group albeit smaller is trying to create a similar movement through Reddit. They claimed that JP Morgan in the runup to short sell Top Glove starting on 2 Jan 21 had tried to downgrade the stocks valuing the company at a valuation of RM3.50 (at the time, Top Gloves were trading at around RM7.00) which was way lower than the price provided by other investment houses. On 2 Jan, when short selling were allowed (with much limited conditions), Top Glove's stock were sold down with the short selling playing a substantial part. The Reddit group under Bursabets initiated under a pseudo-name  Revenant claimed that the company was wrongly targeted as it wanted to short the stock.

After that rally call, Top Glove's stock had a runup by as much as 13% the following day. Both Bursa Malaysia and SC had asked the investment community to be cautious of social media chatrooms not long after that.

Now my question about all these is, who are in the wrong due to all these?

In the GameStop's situation, some guys saw a huge weakness in the shorting of the stock. It was shorted by 140%, obviously way over-shorted (by this actions, we see that by allowing the stock to be shorted way more than the stocks available, it is already wrong) - and the group that rallied the retail investors knew that by getting the community to come together, it can cause the shorts to get into trouble. There is no fundamentals in getting the stock to $400 a stock, but so is the over-shorting of the stock to 140%.

In Top Glove's case, yes we know that JP Morgan is a licensed advisor. It is allowed to provide a call even though the advise can be totally ridiculous? Then are they allowed to short sell the stock even after making a controversial call? (We do not know for real whether JP Morgan did the short selling, but we know that several foreign funds did short sell Top Glove and JP could have acted on their behalf)

Bursa and SC will not apprehend JP Morgan for sure. Now my question is, can Bursa and SC get all these so called licensed advisors to be fair. Can they get these guys to not pick when to release their analysis i.e. releasing to their clients first then only to the public? Can they get the investment houses to not be making any trading on the stocks which they make a call? One must know, in the social media world, the calls by these licensed advisors can be even more assertive and viral.