Home GDP A debt is a debt

A debt is a debt

WHEN Bank Negara released the fourth quarter (Q4) and 2020 gross domestic product (GDP) data about a month ago, the Finance Ministry (MoF) too released a report on Malaysia’s economic performance for last year at the same time. One of the interesting data that was revealed in that report was on Malaysia’s debt-to-GDP ratio.

In the narrative explained by the MoF, it showed that federal government debt had increased to RM879.6bil or 62.2% of the nation’s nominal GDP as at end-December 2020. The report also explained that statutory debt, which comprises of Malaysian Government Securities (MGS), Malaysian Government Investment Issue (MGII) and Malaysian Islamic Treasury Bills (MITB) stood at 58% of GDP, and was still below the 60% statutory limit that was raised last year. 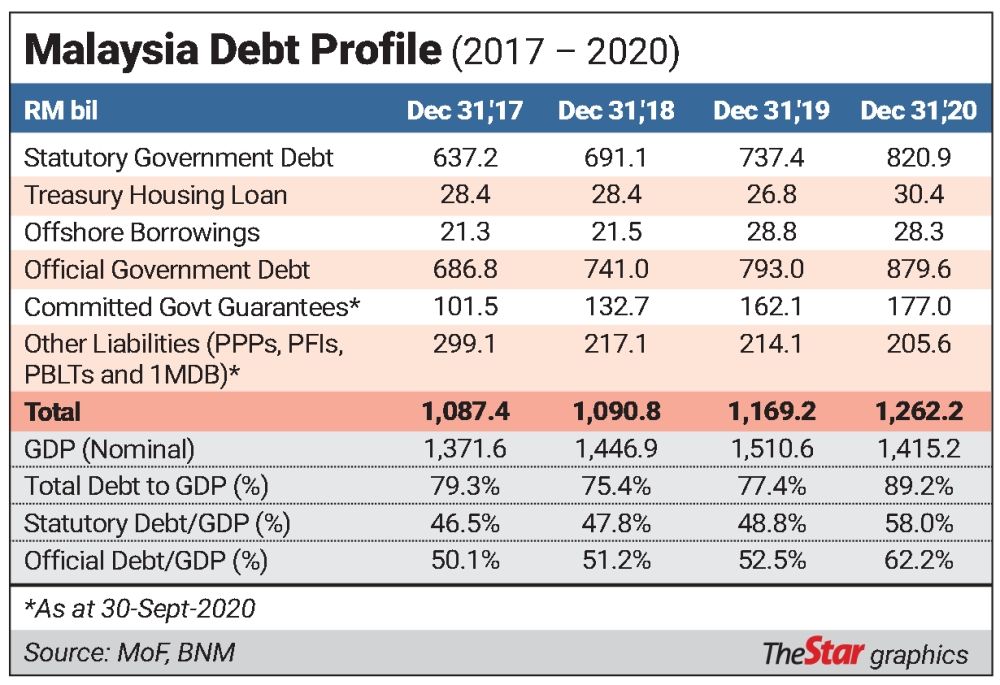 The difference between the federal government debt and statutory debt is that the former includes treasury housing loans and offshore borrowings, which is about 2.2% and 2% of nominal GDP respectively for the year ended 2020.

Another point of interest as far as Malaysia’s debt is how rating agencies are defining our debt profile. In early January this year, Moody’s reckoned that Malaysia’s debt-to-GDP would have risen to 66% of GDP at the end of 2020 from just below 56% in 2019.

Fitch, in its rating downgrade of Malaysia on Dec 4 last year, said that Malaysia’s government debt was expected to jump to 76.0% of GDP in 2020 from 65.2% of GDP in 2019. Post-tabling of Budget 2021 by the Finance Minister in November last year, S&P Global commented that the government’s net debt stock, inclusive of committed guarantees, would hit 67.8% of GDP in 2020. The International Monetary Fund (IMF) in its country report released on March 17 showed that the country’s federal government debt to GDP stood at 52.5% in 2019, and this was estimated to have increased to 61.1% in 2020.

Hence, we have multiple debt to GDP data that has been thrown at us, from the official figure of 58.8%, which only includes those that are deemed to be as statutory debt, to as high as 76% as envisaged by Fitch.

The question is, which is the right figure although the World Bank and the IMF seem to be using the government’s federal government debt as its reference point. 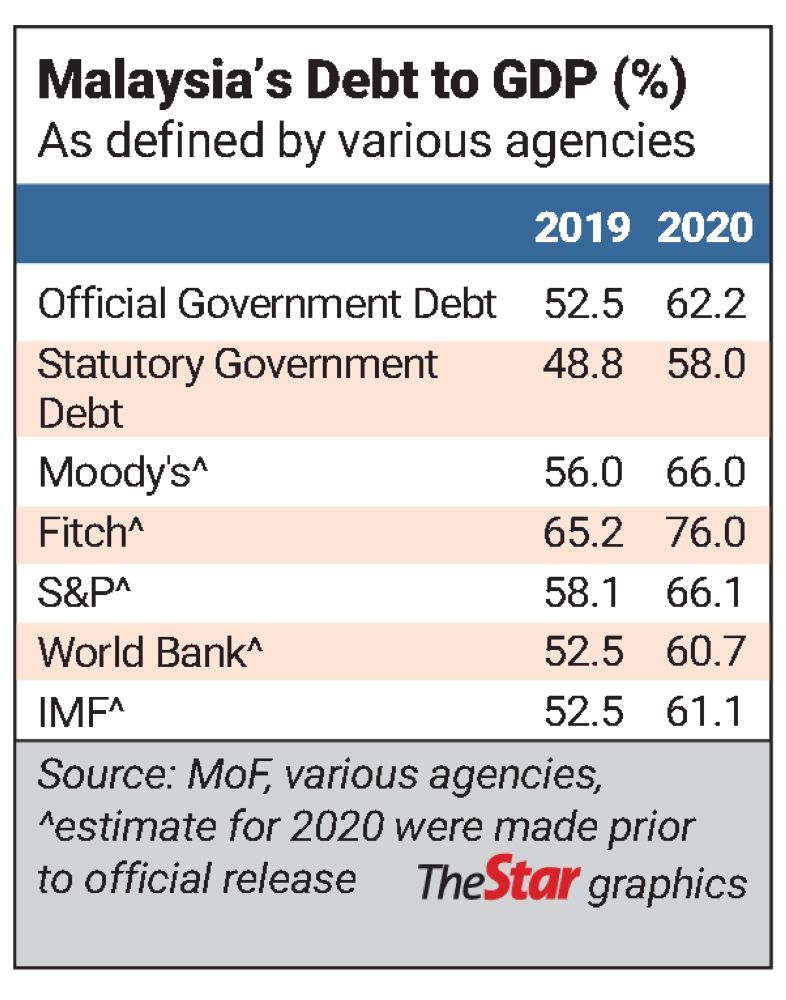 The table on Malaysia’s debt to GDP summarises the government’s interpretation of the nation’s debt to GDP as well as from international rating agencies, the World Bank and the IMF.

In order to understand better Malaysia’s actual debt, it is best to break it down into what is defined by the government in terms of the statutory debt, federal government debt and other debts, which are categorised under committed government guarantees and other liabilities.

The table on the nation’s debt profile summarises this and the picture is now clearer as to Malaysia’s actual debt profile.

From this table, we can now see how Malaysia’s debt is broken down into various definitions, ie, total debt to GDP, statutory debt to GDP and official debt to GDP. We can also see that Malaysia’s total indebtedness, based on the Sept 30,2020 figure for committed government guarantees and other liabilities, is now at RM1.262 trillion which translates to 89.2% of nominal GDP.

Within government debts that are classified as committed guarantees, some RM130.55bil or 73.7% is related to rail infrastructure. This includes RM71.6bil for Danainfra Nasional, RM27.9bil for Prasarana Malaysia and RM21bil for Malaysia Rail Link.

Danainfra is involved in the construction of the MRT projects, Prasarana basically owns and operates the three LRT lines, KL Monorail, and also operates the MRT lines, while MRL is the project owner of the East Coast Rail Link (ECRL) project.

Other liabilities are more diverse but demanding on government’s coffers.

Debts defined under other liabilities include those of 1Malaysia Development Bhd (1MDB) that amount to about RM32.3bil (note: 1MDB debts are defined separately by the MoF), public-private partnerships (PPP) involving some 97 projects as at end-September 2020, which are mainly financial commitments in the form of maintenance charges, availability payments, asset replacement charges and volume-based service contracts.

Total liabilities under PPP amounted to RM119bil as at Sept 30,2020. There are two more liabilities that are defined under other liabilities and they are mainly for infrastructure development like schools, hospitals and training centres under Pembinaan PFI Sdn Bhd, and police quarters, police stations and other facilities for the Royal Malaysian Police under PBLT Sdn Bhd.

As at end-September 2020, the total liabilities under PFI and PBLT amounted to RM49.5bil and RM4.8bil respectively.

Other than 1MDB debts, which are clearly now a burden of the federal government, the financial commitments that are under PPP/PFI/PBLT are generally lease or rental payments and not pure debt.

Both PFI and PBLT are also wholly-owned subsidiaries of the MoF and hence, it looks more like the two SPVs were created to roll out infrastructure projects.

These numbers seem to coincide with what Fitch has defined as Malaysia’s debt-to-GDP figure as described in the relevant table.

As Malaysia is expected to continue to run a budget deficit for this year, the government is expected to borrow another RM95.8bil. This includes funds needed for the RM11bil direct fiscal stimulus from the Pemerkasa programme announced on March 17.

The question is, with debt to GDP well above the 60% statutory limit that was revised last year, is the current definition of 58% as of end of last year, which only includes the MGS, MGII and MTIB, a true reflection of Malaysia’s debt profile? Surely, debts that are related to the housing loan, external debts taken by the government, and committed government guarantees are real debts and not just something that appears on paper.

These debts need to be serviced and redeemed when they mature, or at least rolled over. We cannot be in denial to assume that our debt to GDP is much lower than what it actually is. After all, a debt is debt, no matter how it is defined.

Pankaj C Kumar is a long-time investment analyst. The views expressed here are his own.