A few weeks ago, the authorities are understood to have raided several offices in Menara Lien Hoe in Persiaran Tropicana in the vicinity of the Tropicana Golf and Country Club in Selangor, looking for information on a group of individuals involved in manipulating penny stocks on the Bursa Malaysia.

The authorities, it seems, are after a group of individuals who control as many as 60 companies on Bursa Malaysia and appear to manipulate share prices and siphon out funds from these companies via numerous cash calls and the subsequent acquisition of assets. Also being scrutinised are the “asset-shuffling exercises” undertaken by many of the companies. There is also talk that they are allegedly involved in the legitimising of ill-gotten gains or money-laundering activities.

It is also learnt that there is a ringleader, an individual in his late 40s, who is not directly linked to any of the companies but efficiently uses proxies to mask his presence, utilising, instead, several generals who control the shares in many of them.

The Edge managed to identify almost 40 out of the 60 companies controlled by the same few individuals. (See chart next page.) 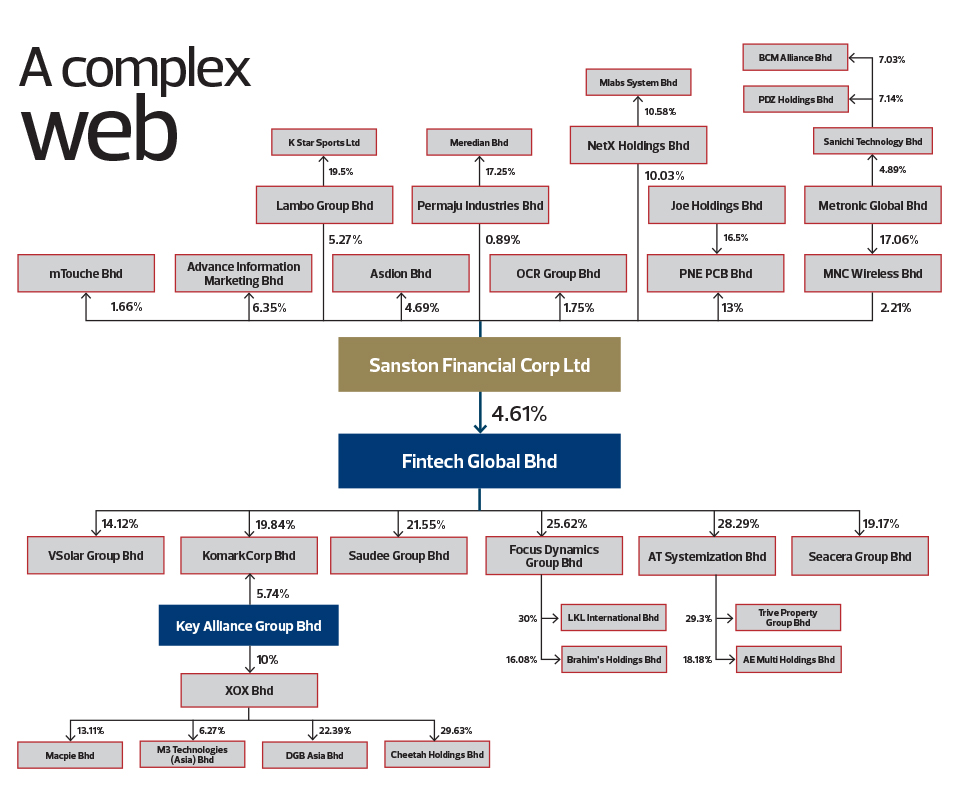 The ringleader controls, among others, Sanston Financial Group Ltd. The web of control appears to flow from Hong Kong-based Sanston.

According to its website, Sanston is a specialist securities broking firm regulated by the Hong Kong Securities and Futures Commission.

Despite the ringleader’s low profile, some blogs — equating him to Datuk John Soh Chee Wen, who is facing trial in Singapore for stock manipulation — have begun to talk about him and his generals, and their alleged stock manipulation activities that have been going on for some time now.

While two government authorities are said to have raided the premises of companies in Menara Lien Hoe, it is understood that the Securities Commission Malaysia (SC) was not part of the exercise. In response to a query on whether an investigation was ongoing, the SC replied: “As a matter of policy, the SC does not comment or respond to queries on whether it is investigating any individual or entity.”

A source close to the SC, however, says that the individuals and their stock manipulation operations have been “on the SC’s radar” for some time now.

Market talk, meanwhile, has it that the Inland Revenue Board and the Malaysian Anti-Corruption Commission were the two government agencies that paid the companies a visit, carting away documents.

“He (the ring leader) is a smart cookie ... he doesn’t surface, so the trails do not lead to him. It’s hard to pin him down, you can’t prove that he is behind the whole thing (manipulation and pillage of companies and its shares),” says one source.

Another source says the central bank is monitoring the ringleader and his generals and could be looking to uncover money-laundering activities. 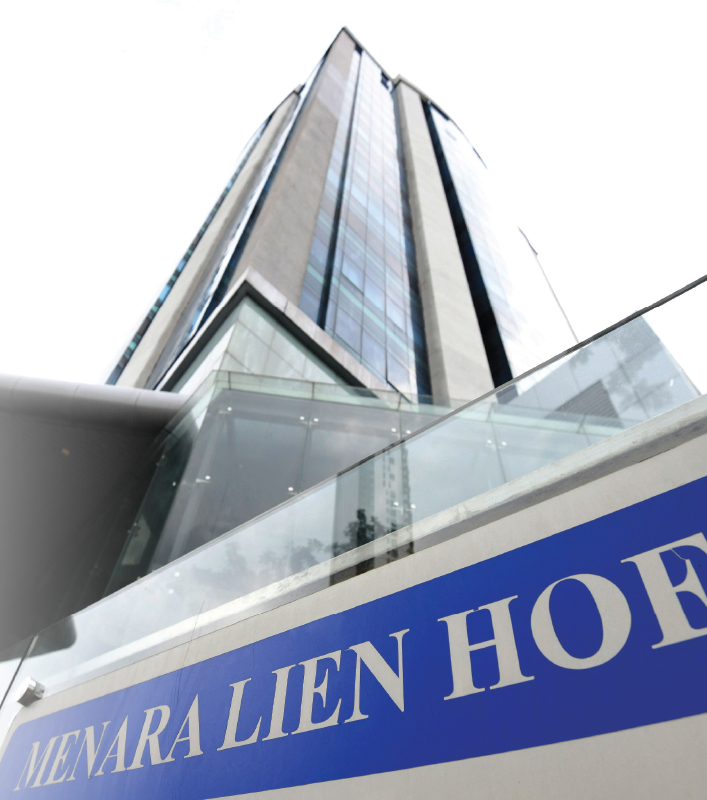 The web of related companies

In September last year, The Edge ran a special report on the same group, entitled “Hidden Hands Behind Penny Stock Surge”. Back then, sources say, the group had gained control — either via shareholding or the board — of 36 companies, out of which 21 were identified. Now, the number of companies under the group is understood to have ballooned to 60.

At the centre of the web is Fintec Global, while the flagship company of the group is Focus Dynamics, a company which has a market value of more than RM3 billion, but which, for its financial year ended December 2020, registered a mere RM16.72 million in net profit from RM66.26 million in revenue. According to the notes accompanying Focus Dynamic’s results, the profit was attributable to “fair value gain on quoted investment”, among others.

As at end-2020, Focus Dynamics had accumulated losses of RM419.92 million, making it hard to justify its market capitalisation of more than RM3 billion, which grants it a place on the MSCI Index.

Its core business, after all, is in food and beverage — operating seven clubs and lounges, and related facilities. 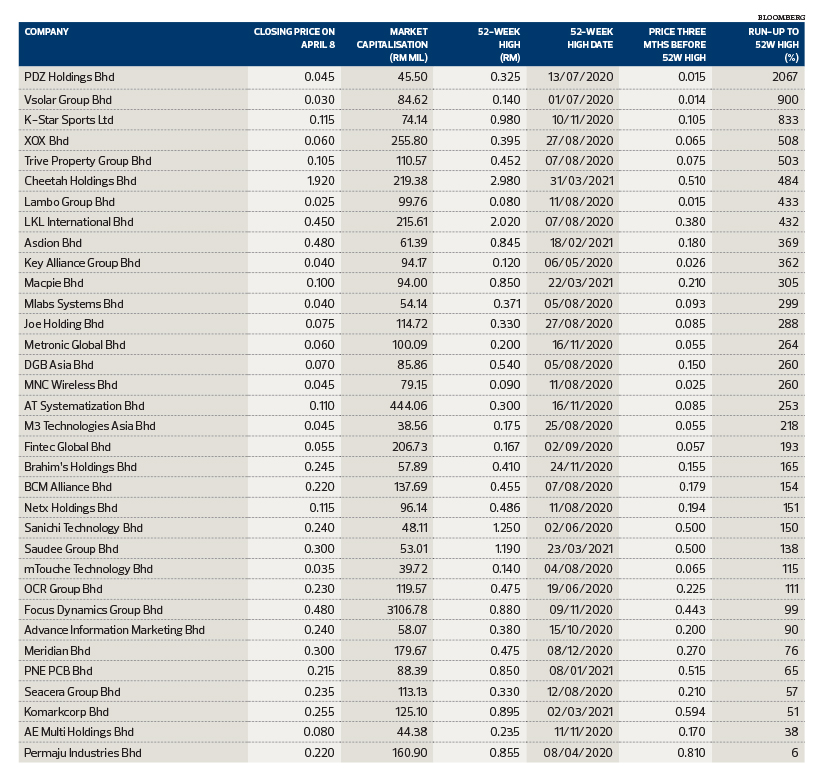 Some of the companies in which Focus Dynamics has stakes include Brahim’s Holdings Bhd, where it has 16.08% equity interest. Brahim’s is best known for having a 70% stake in Brahim’s SATS Food Services Sdn Bhd, the principal in-flight services provider at both the Kuala Lumpur International Airport and Penang International Airport, serving 36 international airlines, including national carrier MAS.

What has piqued the interest of the investing public and the authorities are the irrational gains exhibited by the companies linked to the group.

For instance, PDZ Holdings Bhd, a shipping company that has seen better days, saw a 2,067% run in its share price — from 1.5 sen in April 2020, it hit a multi-year high of 32.5 sen in July last year. It closed last Thursday at 4.5 sen, translating into a market capitalisation of RM45.5 million.

In July last year, Vsolar surged 900% to 14 sen. In November, K-Star Sports Ltd was up 833%, and in August, restaurant operator Oversea Enterprise Bhd gained more than 580%.

The company on the list of the almost 40 stocks that has gained the least (excluding Permaju) is AE Multi Holdings Bhd, which has an electronics business. AE Multi gained 38% in the three-month run-up to its 52-week high of 23.5 sen in mid-November last year.

According to people with knowledge of the operations of the companies, assets within the group are passed around, and in the process, transferring funds as well.

XOX is part of the same group that has Key Alliance Bhd as a 10% shareholder. Key Alliance’s largest shareholder is Sanston, with about a 3.8% stake as at August last year. 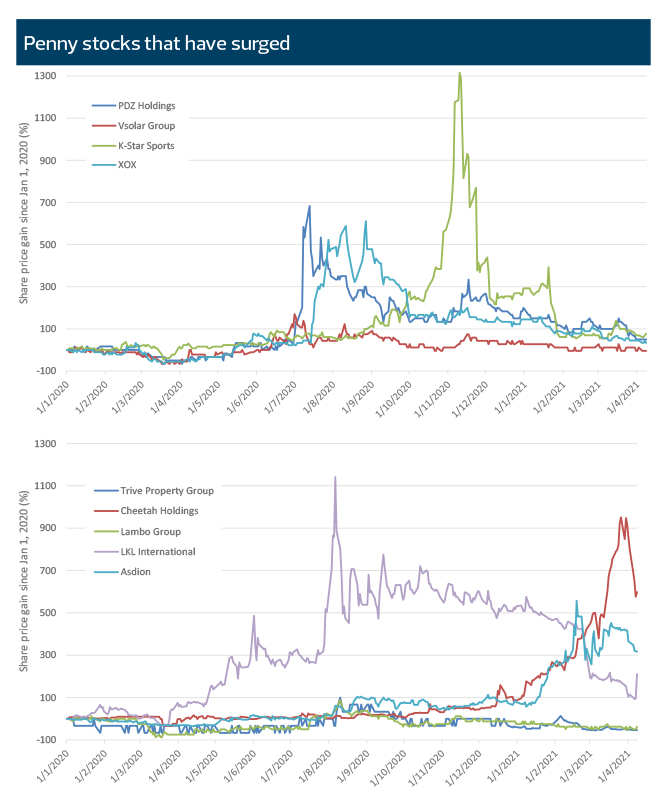 In March this year, Lambo Group acquired 34.6 million shares or 5.43% of K-Star for RM7.96 million on the open market. Lambo Group is connected to the web of companies via Sanston Financial Corp. In July last year, Lambo Group announced that its wholly owned subsidiary, Oriented Media Holdings Ltd in Hong Kong, had acquired 22.8 million shares or 1.1% in Focus Dynamics at an average price of RM1.1253, for a total cash consideration of RM25.65 million from the open market.

K-Star, meanwhile, is 19.5% controlled by Oriented Media Holdings, which is wholly owned by Lambo.

Many cash calls and placements

Almost all the companies in the group also undertake cash calls via placements, supposedly to acquire assets, and issue new shares.

Among those in the stable that have undertaken such exercises are ATS, Vsolar and Fintec Global, taking advantage of Bursa Malaysia’s relaxation of rules for private placements, with the limit raised to 20% of issued share capital from 10% previously, and allowing a 30% quantum for placements if shareholders approve such an exercise.

ATS’ share base, for instance, gained more than 800% to 4.23 billion shares between January 2020 and mid-March this year, after it undertook two private placements and a rights issue. ATS also undertook an employee share option scheme in March of 1.45 billion shares. It is not known how many employees the company has. Among others, the placement was aimed at financing a diversification into manufacturing rubber gloves, which has since been scaled down.

Meanwhile, Vsolar’s share capital ballooned by 587% to 2.82 billion shares as at March 15, after it undertook two private placements, a rights issue and several share issuance schemes to its employees between July 2020 and January this year.

Fintec Global’s share capital more than quadrupled to 3.37 billion shares as at mid-March this year, from 745.56 million as at January 2020.

Key Alliance last year undertook a share placement, rights issue and share issuance scheme for employees, and increased its share base by 352% to 2.35 billion shares, raising RM12.25 million. Then, in January this year, the company proposed yet another private placement of up to 609.45 million shares, or 30% of its enlarged share capital.

And these are just some of the companies in the group.

In early February this year, in an interview with The Edge, Bursa Malaysia CEO Datuk Muhamad Umar Swift, when asked about the syndicates operating and pushing stocks, said, “We have a team of people, with a very intelligent software with a little bit of artificial intelligence in it that is constantly learning and looking at trading behaviour. We know who the syndicates are. We are always watching.”

Nevertheless, sources familiar with the ringleader and his band of cohorts say that with the money they have amassed, it won’t be an easy problem to tackle.

So, will the recent raids lead to a clampdown on the hidden hands this time around?