THE tide may have finally turned for Bursa Malaysia-listed dry bulk operators, which have suffered from depressed freight rates due to excess capacity in the industry since the 2008/9 financial crisis.

Roaring commodity demand, a return to strength in manufacturing activity as well as scrapping of vessels and underinvestment in recent years have pushed dry bulk freight rates higher, and shipowners such as Malaysian Bulk Carriers Bhd (Maybulk) and Hubline Bhd are likely to gain further traction from the higher rates, as capacity is likely to get even tighter.

The Baltic Dry Index (BDI), a bellwether for global dry bulk shipping, has risen 137% year to date (YTD) to close at 3,241 points last Wednesday. It touched a multi-year closing high of 3,418 points on June 29.

The surge in BDI has translated into a broader lift for the local dry bulk shipping market, which saw freight rates starting to climb in March to levels not seen in the past decade, says Hubline CEO and managing director Dennis Ling Li Kuang. He notes that the group’s freight rates were up 25% in June 2021 from December last year, owing to a shortage of vessels to carry cargo in Southeast Asia.

Ling believes dry bulk freight rates are likely to stay at elevated levels throughout the year.

The Sarawak-based shipping firm, which owns 23 sets of tugs and barges with a capacity of 8,000 to 11,000 tonnes, reported a net profit of RM12.95 million for the six months ended March 31, 2021, against a net loss of RM2.5 million a year ago. It expects to swing back to the black for the financial year ending Sept 30, 2021 (FY2021), driven by its dry bulk segment, which accounts for two-thirds of the group’s revenue. The aviation segment contributed the remaining one-third of revenue. In FY2020, the group posted a net loss of RM60.87 million.

Ling sees the dry bulk market settling into an extended period of good earnings for the next three years. He estimates dry bulk freight rates to climb about 40% in the second half of 2021 compared with December last year. “This includes container shipping, whose rates have gone up even more,” he says. Ling’s bullishness stems from an anticipated rush of orders in Europe and the US as these economies reopen, following a lower incidence of Covid-19 and the broad rollout of vaccines. “Since the start of the pandemic, manufacturing activity in Europe and the US has slowed because of lockdown restrictions. But this part of the world, like China, continued to produce and export goods to the West. As the European and US economies reopen, we can probably see a surge in demand (for shipping),” he tells The Edge.

“In fact, we have come to a stage where we are not able to cater for demand. Hubline’s vessels are fully booked till September despite the strong rise in prices.”

Another reason for Ling’s bullishness is that the dry bulk market continues to be tight.

“The scrapping of older ships and the decline in new ship orders in the last 10 years had led to the current supply tightness. While some carriers have started to order vessels, traditionally, it takes about two years to build a ship. Moreover, steel prices have gone up substantially such that most shipowners, including Hubline, will just have to wait and see how the situation evolves. If we were to order new vessels now, steel costs alone would result in a 15% increase in vessel prices.

“Because the new shipping capacity is unlikely to come in soon, this should keep the market tight and spot dry bulk prices at an elevated level for at least three years,” he says.

According to him, infrastructure developments such as China’s Belt and Road Initiative and Singapore’s airport expansion are also driving demand for raw materials, which bodes well for dry bulk carriers such as Hubline that carry gypsum, aggregates, coal, palm kernel shells and scrap metal between countries in Southeast Asia such as Indonesia, Vietnam, Singapore and Thailand.

Maybulk, the country’s largest dry bulk operator, which is controlled by tycoon Robert Kuok, has also seen its fortunes improving. The group recorded a net profit of RM15.01 million in the first quarter ended March 31, 2021 (1QFY2021) compared with a net loss of RM49.78 million in 4QFY2020.

Maybulk attributed this to a 25% increase in charter rates to US$12,860 a day in 1QFY2021 from US$10,306 a day in 4QFY2020, lower vessel operating expenses and the redelivery of two loss-making chartered-in vessels. The group owns five vessels and operates two under long-term charter, which are scheduled for redelivery in early 2022 and mid-2023.

It is also expecting near-term performance of the dry bulk sector to remain positive, as dry bulk volumes have recovered and markets have rebounded from the 2020 Covid-19 shock.

Dry bulk shipping is not the sole bright spot. Tasco Bhd deputy group CEO Tan Kim Yong shares Ling’s sentiment. He says the cost of container freight has more than quadrupled from 2020 as current market demand outstrips supply and because of a shortage of containers, owing to congestion in Europe and the US, and, recently, China’s Yantian port backlog. The average price worldwide to ship a 40ft container (FEU) has more than quadrupled from a year ago, to US$8,399 as at July 1, according to London-based Drewry Shipping Consultants Ltd.

“Container freight rates are at historical highs. In January, spot freight rates were US$4,000 per FEU and are now at US$6,000. This time last year, the rates were US$1,500. Ocean freight rates from Asia to Europe and the US have risen the most, but rates for intra-Asia routes have gone up as well,” Tan says.

He notes that the rates started edging upwards from 3Q2020, owing to imbalanced container trade, with full containers entering the US and Europe but returning empty to China, whose economy has recovered faster from the pandemic than any other big economy.

Tasco expects to continue its growth for this financial year, targeting a revenue of RM1 billion. The investment tax allowance granted through the Malaysian Investment Development Authority will further uplift its profit, says Tan.

On the equity front, investors’ reaction to shipping stocks has been mixed YTD as investors await results of the shipping companies’ June 2021 quarter.

After turning up from a 52-week low of 34.5 sen last August to as high as 82 sen in May, Maybulk’s share price has pulled back subsequently to close at 71 sen last Thursday. The stock is up 37% YTD. 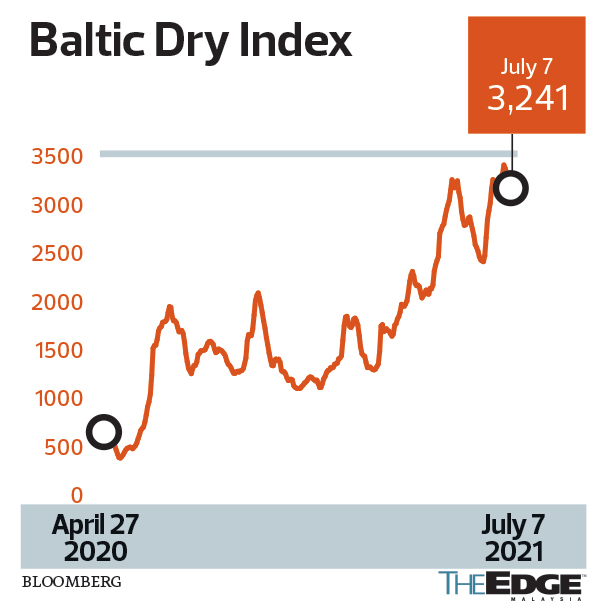 However, Hubline’s share price is down 20% YTD to close at four sen on Thursday. Ling believes that, once the group’s results for FY2021 are announced, the market will fully appreciate the high freight rates enjoyed by Hubline.

“A lot of the current liabilities are bank overdraft, which is a rolling facility. In addition, we had recently undertaken a private placement of up to 10% of the group’s total issued shares, raising about RM16.38 million. So, it is not that we don’t have enough funds to continue as a going concern,” Ling explains.

According to him, the downside earnings risks are the bunker prices, which had risen 5% y-o-y in the March 2021 quarter, and a lockdown at ports, which may cause shipping delays.

Nevertheless, a strengthening US dollar will have a favourable impact on Hubline, as most of its revenues are earned in US dollars and 2% to 3% in Singapore dollars.

For Maybulk, the downside risk is pressure from Chinese regulators later in the year seeking to curb excess capacity and pollution in heavy industries, which may affect iron ore and coal imports. “The resurgence of Covid-19 infections in the Indian subcontinent and other parts of Asia also presents downside earnings risk, increased vessel trading complexities and quarantine risks,” it said in its notes accompanying its 1QFY2021 earnings report.