If you want a certain electrical appliance to be switched on during certain time period(s) of the day, and be switched off otherwise, this Nippon II NP2-348T mechanical 24-hour segmented timer electric power switch can be very handy to you. It cost only less than RM20. 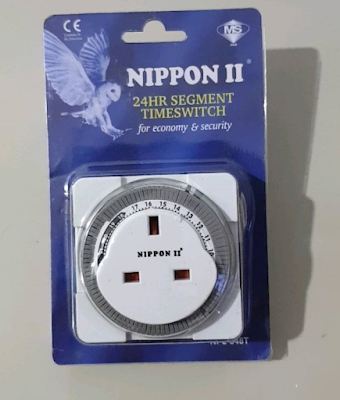 Some examples of usage including:

This mechanical segmented timer switches is designed to work in a "set it and forget it" manner. You just need to set it correctly for one time, and it will continuously switch on/off the electricity supply of its socket according to your setting, on daily basis. 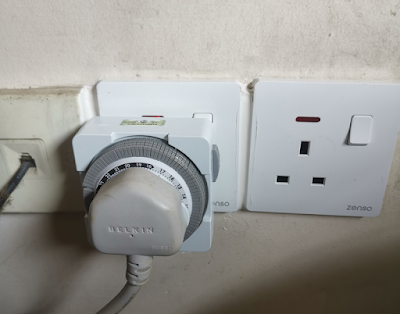 There are 96 tappets on the dial. You program the timer switch by pushing in and pulling out the tappets accordingly.

When plugged into the wall socket with power switched on, the dial will rotate like a clock, and the electricity supply to its socket will be turned on/off according to your setting.

To make it works at the right timing, just locate an arrow at its top right corner, then dial its ring so that the arrow is pointing to the current time.

There is a bypass switch at its right hand side. If you switch it to "On", the timer will continuously supply electricity to its power socket, and ignore all the settings programmed with its tappets. This is handy when you want to turn on your electric appliance during the time period which it is programmed to be off.

If you switch the bypass switch to "Timer", then it will work according to your programmed time schedule.

If you want to switch off the electricity supply to your appliance during the time period which it is supposed to be on, you can just turn off the wall socket power supply.