DURING the December quarterly earnings season concluded last month, many companies announced stronger quarterly profit, owing to the reopening of the economy that allowed business activities to return to some semblance of normal.

Notably, companies also rewarded their investors with dividends on account of better earnings. It certainly was good news for investors because in FY2020, many companies either cut their dividends to conserve cash at the height of the pandemic or stopped doling out dividends completely.

Looking at the top 50 companies based on market capitalisation listed on Bursa Malaysia, an analysis shows that there were more companies paying out higher dividend per share (DPS) for the financial year ended 2021 (FY2021) from a year ago and fewer companies paid lower dividends in FY2021 or maintained their DPS.

Among the 50 big caps, 18 companies paid higher DPS in FY2021 compared with pre-Covid FY2019, six maintained their DPS and 23 paid lower DPS. Two did not pay any dividends over the last three years and one was only listed in FY2020.

It is no surprise that glove makers Top Glove Corp Bhd and Hartalega Holdings Bhd doled out significant dividends to shareholders when compared with FY2019, given the bumper profits earned from 2H2020 until 3Q2021. 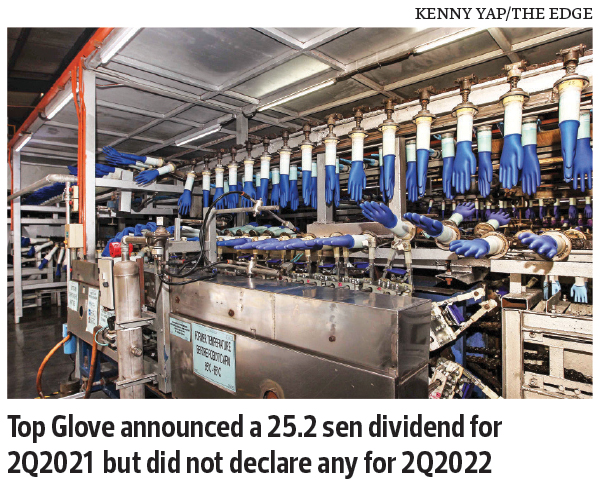 As for Hartalega, DPS in FY2021 increased close to six times from FY2019, a relatively more modest pace compared with Top Glove’s.

Interestingly, the nitrile glove producer’s DPS trend has not been linear over the past three financial years. DPS stood at 8.5 sen in the financial year ended March 31, 2019, and fell slightly to 7.55 sen in FY2020. It was increased to 50.95 sen per share in FY2021, corresponding with the company’s net profit trend.

Nevertheless, the exponential net profit growth and high dividends are unlikely to be a long-term pattern. The estimated DPS for Top Glove for the current financial year ending Aug 31, 2022, sits at four sen — double its pre-pandemic days but a small fraction of the amounts declared in FY2020 and FY2021.

As for its peer Hartalega, analysts estimate that its dividend would come in at 16 sen in FY2022.

Besides the glove makers, most big-cap plantation companies have also been more generous in their dividend payout as crude palm oil (CPO) prices resumed their upward trend in May 2020 after the sharp fall in January-April that year, caused by pandemic fears. Since then, edible oil prices have reached new peaks.

Notably, FGV Holdings Bhd swung back to net profit in FY2020 and saw its net profit grow further to RM1.17 billion in FY2021. The debt-laden plantation giant, which did not pay any dividends in FY2019, rewarded shareholders with a DPS of three sen in FY2020 and raised it to 8 sen per share in FY2021 as net profit improved. However, FGV’s dividend payout ratio in FY2021 was substantially lower at 25% compared with 75% in FY2020.

From a DPS of one sen in FY2019, during which it was loss making, Sime Darby Plantations has raised its DPS as it turned profitable. In FY2021, DPS was at 20.28 sen as net profit amounted to RM2.26 billion, thanks to the rally in CPO and palm kernel prices. 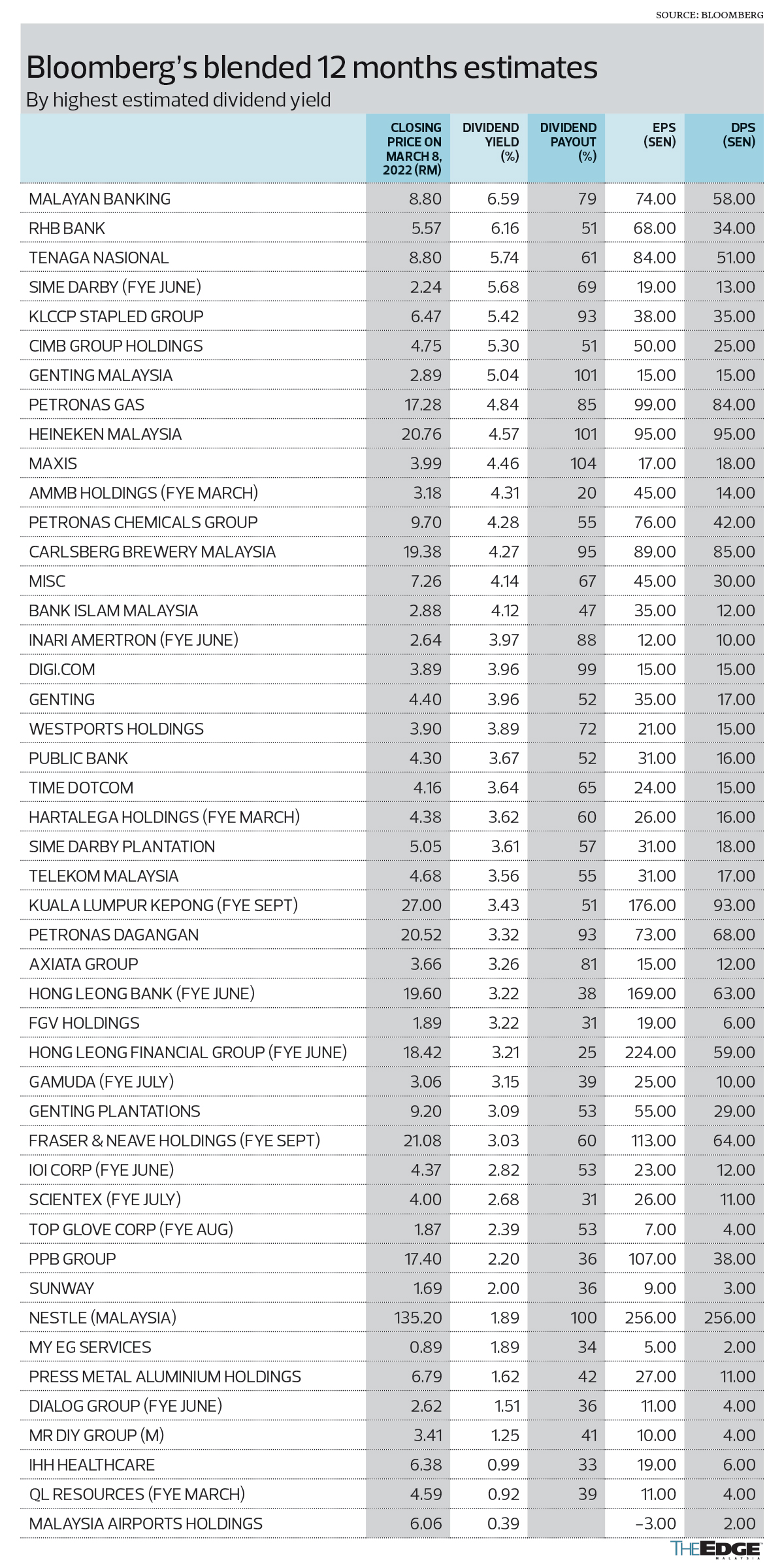 The plantation sector continues to be fraught with volatility and uncertainty this year as the Russia-Ukraine conflict pushes CPO to above RM8,000 — the highest in history. During the 33rd Palm & Lauric Oils Price Outlook Conference & Exhibition last week, RHB Research mentioned in a report that the speakers declined to commit to a price but agreed that prices will remain high in the short term.

Companies with available estimates on Bloomberg show that the DPS for FY2022 will decline, but only slightly compared with the previous year. Among the big-cap planters, Sime Darby Plantations has the highest estimated dividend yield at 3.61% based on the closing on March 8, followed by Kuala Lumpur Kepong Bhd’s estimated yield of 3.43%.

After taking a pause in FY2020 to shore up capital, most of the banks resumed paying dividends in FY2021 as earnings bounced back. The exception was AMMB Holdings Bhd.

AMMB did not pay out any dividend in FY2021 ended March 31 as it posted a net loss of RM3.8 billion, thanks to a one-off settlement of RM2.83 billion for its involvement in the 1Malaysia Development Bhd (1MDB) debacle, which has stressed the government’s fiscal health severely after the latter resumed 1MDB’s more than RM40 billion debt.

Other banks did pay higher dividends in FY2021 compared with FY2020 but they were lower than FY2019’s.

For FY2022, analysts opine that while banks will maintain their dividend payout ratios, DPS could be flat as earnings might be impacted by the one-off prosperity tax, or cukai makmur, that will be imposed on companies. Cukai makmur was proposed by the federal government in Budget 2022, whereby chargeable income above the RM100 million mark will be taxed at a rate of 33%, instead of the blanket 24% rate previously. The tax is levied on a company’s chargeable income and not its net profit.

No big surprises from GLCs

Among the six government-linked companies (GLCs) — in which Khazanah Nasional Bhd holds substantial stakes — on Bursa’s list, three, including Tenaga Nasional Bhd, paid lower dividends in FY2021 while two, Axiata Group Bhd and CIMB Holdings Bhd, gave out higher dividends and the last did not pay any.

Axiata and CIMB rewarded shareholders with higher dividends in FY2021 at 9.5 sen and 22.99 sen respectively. Based on Bloomberg estimates, the companies are forecast to raise DPS this year to 12 sen (Axiata) and 25 sen (CIMB).

As for Malaysia Airports Holdings Bhd (MAHB), which was undoubtedly hit hard by the Covid-19 pandemic, it has not paid dividends for three consecutive years. While analysts forecast that MAHB will report a loss per share of three sen in FY2022, they also estimate a DPS of two sen this year.

Of the three Petronas-related companies on the list, Petronas Dagangan Bhd and Petronas Chemicals Group Bhd dished out higher DPS of 70 sen and 56 sen respectively. They had slashed dividends in the previous year. 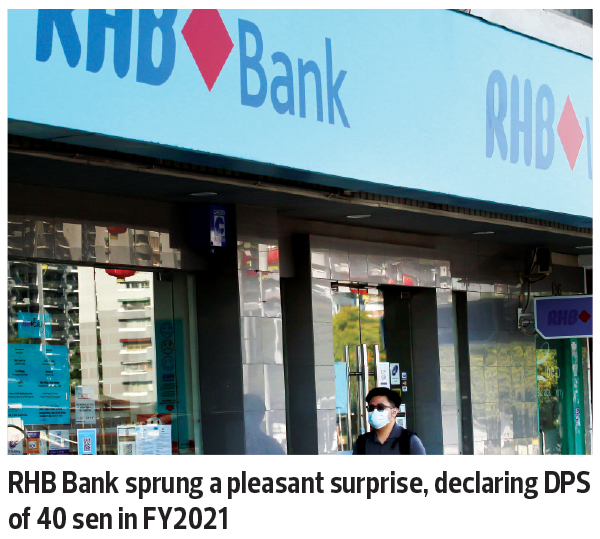 Notably, Genting Bhd (GenT) and Genting Malaysia Bhd (GenM) — both of which suffered massive losses in FY2020 and FY2021 as their casinos worldwide were shut down for the first time in history thanks to the lockdowns during the pandemic — still rewarded shareholders with dividends, albeit at a lower rate.

This year, analysts are more optimistic on the prospects of the two companies, given the reopening of the economy. Consensus forecast pegs GenT’s earnings per share at 35 sen and GenM’s at 15 sen. In view of the likelihood of better earnings, the analysts also expect DPS to be higher at 17 sen and 15 sen respectively.

As companies will have to pay cukai makmur in FY2022, analysts expect profit growth to be tepid, if not contracted. Naturally, this would translate into lower dividends even though the payout ratios are maintained.

However, other analysts believe that dividend levels will be continued by certain companies, such as those that have minimal capital expenditure requirements.