Home bursadummy My Portfolio May22 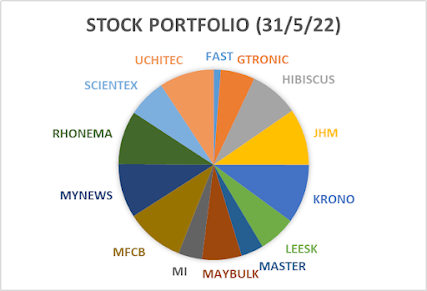 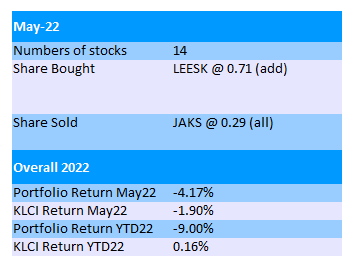 Stock Portfolio @ End of May22 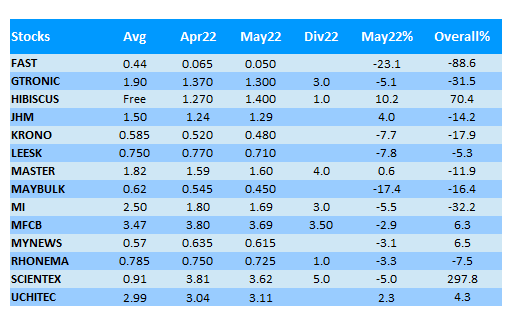 Since reaching its height in Feb22, my stock portfolio value has been gradually shrinking non-stop like a leaking pipe.
May is the worst month to my portfolio so far this year with a loss of 4.2%. The main culprit is the 17% decline of Maybulk while most tech-related stocks also suffered in this month.
Year-to-date loss stands at 9% but it's still better than year 2016 & 2018 which suffered loss of 14.7% and 13.5% respectively at this stage.
There seems to be nothing special happening in May, just the old stories of inflation, US rate hike and Russia-Ukraine war.
Brent oil price continues its uptrend and it touched USD124/bbl in the last day of May.
From the financial performance of local listed companies, I feel that most of them do not do very well.

For those companies in my portfolio, I think the latest quarterly results of Uchitec, MFCB, Rhonema, JHM, Master and LEESK are good.

The rest are so-so.

Jaks FY22Q1 result was not too bad with a PATAMI of RM21.1mil (EPS 1.03 sen). Again, it has been saved by the profit sharing from its Vietnam power plant.

Operating profit in this quarter stays negative at a loss of RM17.5mil, while profit sharing from Vietnam is RM33.9mil.

For the last full FY2021 ended in Dec21, overall operating loss was at RM108.8mil and the Vietnam profit sharing stood at RM139.3mil.

Operating cash flow remains poor as it registers persistent losses from its construction and property investment divisions, which looks never-ending.

Revenue is in the downtrend as no new construction contract is secured. Its LSS4 project is expected to be completed in one year's time (Q1 of 2023) but its profit contribution is likely to be relatively small.

To me, the only hope now for Jaks is to get the dividend payment from JHDP which is its Vietnam power plant investment.

It's already been more than one year since the plant started operation but it seems like no dividend is distributed yet. Perhaps it will be in mid 2022?

Anyway, cash continues to be burnt daily and it has a total cash of RM102mil at the end of Mac22, after just raising RM129.5mil through private placement in mid 2021.

If operating cashflow is still poor in the next 2 quarters, I can't rule out a further cash call by Jaks.

As a well-managed company, MFCB's share price does not move much even though it gets RM450mil cash inflow yearly from its hydropower plant.

Looking at this, I have some doubts over how much valuation the market will give to Jaks later. We know that Jaks is not a very well-managed company after all.

Those are the main reasons I decided to end my investment in Jaks, especially when it's still in a gain position.

Nevertheless, I think Jaks should be able to pocket at least RM150mil cash from its power plant every year once everything is stabilized.

So I'll still put an eye on this stock.

Its previous quarters net profit were mostly affected by various one-off items. So to me, current quarter best represents its true colour.

If you refer to my previous 2022 net profit prediction for JHM, I predicted an average of RM8mil PATAMI per quarter or RM32mil per year.

So obviously this set of result is slightly better than my expectation.

There are a few new projects in the pipeline. Hopefully its financial performance will get better in the subsequent quarters.

The financial result of Maybulk in FY22Q1 is below my expectation with a net profit of RM8.4mil (EPS 0.84sen), despite the BDI dropped to its lowest point in the quarter.

I thought it can easily chalk up at least RM10mil net profit a quarter.

It has sold yet another vessel in May22. Thus its FY22Q2 result should be no doubt an impressive one due to the disposal gain.

However, with only 4 vessels operating now, future revenue and profit from its shipping operation are not expected to be massive.

There was a major change in shareholder and boardroom in Maybulk recently, which saw the exit of Robert Kuok.

Pacific Carriers Ltd owned by Robert Kuok disposed its 32% stake to Datuk Goh (16%) and Datuk Chin (16%). Both joined the board of Maybulk as executive directors.

Datuk Goh is the founder and executive director of listed Leader Steel and Eonmetall Group, while Datuk Chin has more than 30 years experience in housing development and retailing business.

I don't think the new shareholders and directors will continue to run Maybulk solely as a shipping company. An injection of new business is very likely, probably property development.

Anyway, this is not something I could predict when I first invested in Maybulk.

The corporate development in the near future might be positive or negative to its minority shareholders. I think I should gamble and continue to hold its shares.

Maybulk emerged from a RM207mil net borrowing position just 2 years ago to a net cash position of RM156mil now.

It has completely settled all its remaining borrowings in FY22Q1. With the sales of another vessel, the coffer of cash will surely increase in the next quarter.

With a net asset per share of 48sen at the moment, I don't think I should sell below this price at a loss.

The FY22Q1 result of Master is good, with it highest ever Q1 profit at RM4.6mil (EPS 8.4sen) despite softer revenue.

It will face the challenge of escalating cost similar to others in the manufacturing sector. It might be able to pass the cost to its customers by increasing the selling price.

At share price of RM1.60, it's just trading at a actual PE valuation of 5.5x. It seems to go back to its old time valuation when the market sentiment is subdued.

Compared YoY, revenue increases across all 3 segments of animal health, food ingredients and dairy business. There is a small loss before tax of RM0.13mil in its dairy segment though.

Its share price stays flat between 70-75 sen since the start of 2022. It can be considered good in such a volatile market.

It has just completed a private placement of 20.1mil shares at 67sen for its dairy business venture, bringing its total issued shares to 221mil.

LEESK's FY22Q1 quarter result is rather good as expected. Its revenue (RM30.6mil) and net profit (RM3.68mil, EPS 2.28 sen) are its second highest in the history, and also its best ever in Q1.

However, the vendor failed to fulfill certain conditions and the results of Italhouse was never consolidated into LEESK's account.

To make thing worse, the pandemic and MCO hit afterwards. Its business which depends very much on customers from Singapore suffered and a few branches were forced to close down.

LEESK has made some impairment loss on this investment in FY21.

I'm not sure whether Italhouse's business is still running smoothly and whether it will ever be consolidated into LEESK's account.

Anyway, with the reopening of Malaysia-Singapore border, I guess it should be able to do well from now.

The main reason I invested in LEESK is its collaboration with Cuckoo to market its Napure mattress, which is said to be the one and only aniline-free 100% natural latex mattress in Malaysia.

Cuckoo Napure registered RM9.8mil sales in FY21 which is still less than 10% of its total revenue of RM104.6mil in the MCO-hit FY21. 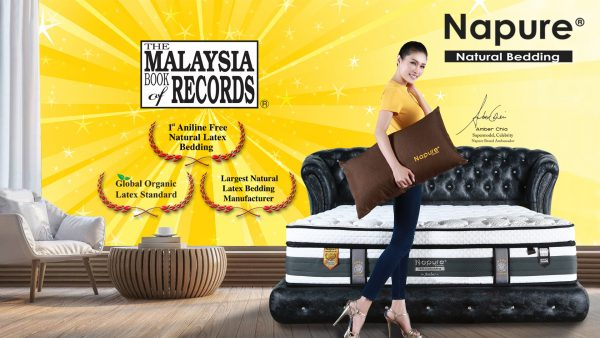 Without this one-off gain, its PBT was just RM13.1mil which is very disappointing at a glance.

However, deeper exploration into its financial report shows that it is not that bad after all.

In summary, the poorer than expected profit is FY22Q3 are due to: 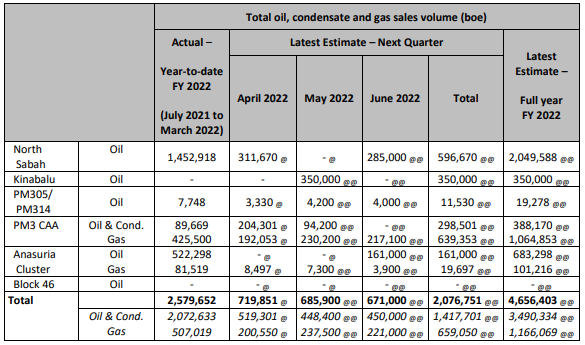 The table above shows the numbers of actual (@) and estimated (@@) oil & gas production of Hibiscus's assets.
In the next quarter of FY22Q4 (Apr22-Jun22), there will be two offtakes from North Sabah totaling 596,670 bbls, which will be two times higher than its Q3.
Its FY22Q3 EBIDTA from North Sabah was RM48.1mil, so it should be at least double this figure especially when the crude oil price is higher in FY22Q4.
Kinabalu will have an offtake in May at an estimated 350,000 bbls. As North Sabah sold 300,252 bbls in FY22Q3 with EBIDTA of RM48.1mil, this predicted Kinabalu offtake might give approximately RM56mil of EBIDTA if the efficiency of both are similar.
PM3 CAA only sold 89,669 bbls of oil and 425,500 of gas from Jul21 to Mac22. However, it is expected to sell 298,501 bbls of oil and 639,353 of gas in upcoming FY22Q4 alone.
As its EBIDTA excluding one-off gain from PM3 CAA (oil + gas) was RM70.7mil year-to-date, FY22Q4's EBIDTA might reach RM200mil I guess.
Anasuria cluster in UK is expected to yield 161,000 bbls in the next quarter which is on par with its recent quarterly average. So far this FY its quarterly average EBIDTA is RM42mil.
With such rough estimation, next quarter's EBIDTA might reach RM400mil if there is no other one-off loss.
In the first half of its FY22 (Jul21 to Dec21), Hibiscus achieved EBIDTA of RM263.5mil with net profit of RM90mil.
So, EBIDTA of RM400mil might give a net profit of RM140mil, or EPS about 7sen.
This is just a very simple calculation and might not be accurate.
Uchitec recorded its best ever Q1 result for the fourth consecutive years. Its FY22Q1 revenue and net profit of RM47.9mil & RM26.8mil (EPS 5.9 sen) respectively are its second best in the history.
Overall it has achieved 8 years of successive net profit growth, with the only exception of slight drop in 2018.
In 3 years time from 2018 until 2021, its net profit grows every year from RM69mil to RM91.5mil, with a 3-year CAGR of 14.2%.
It is set to continue its growth in FY22 barring any unforeseen circumstances.
The management does not change its expectation of a low-teens growth in revenue in term of USD in FY22. I interpret it as about 12% growth.
Nevertheless, market does not give its business model a higher PE ratio like other tech-related stocks. As a result, its actual PE stays around 15. 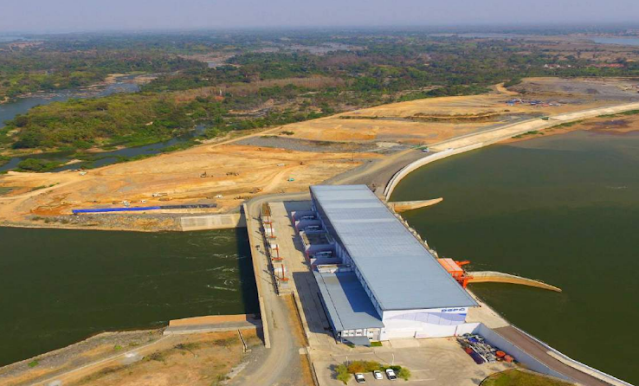 MFCB has its best ever Q1 result with PATAMI of RM81.3mil (EPS 8.6sen) which is 11% higher than previous best in FY21Q1.
Sales of electricity from its hydro plant in Laos achieved its best