Home FBMKLCI Capital: Which company will be the most profitable big cap in 2020?

Capital: Which company will be the most profitable big cap in 2020?

On October 12, 2020
IF analysts are on the mark with their forecast target prices for Top Glove Corp Bhd, the glove maker will emerge as the FBM KLCI composite stock with the largest expected market capitalisation, of RM85.58 billion, topping Malayan Banking Bhd’s RM84.15 billion by RM1.43 billion or 1.7%.

The projections are based on analysts’ consensus target prices for the shares of both companies, as polled by Bloomberg, and their outstanding shares as at last Wednesday (Sept 30).

Analysts have a consensus target price of RM10.53 for Top Glove, the world’s largest glove maker, and RM7.49 for Maybank, the country’s largest lender.

On a calendar year basis, this works out to a net profit of RM4 billion for 2020 and RM6.63 billion the year after.

This would mean that Maybank is still the most profitable company on Bursa Malaysia in 2020 and 2021 if analysts’ projections are correct.

Those who cover the two glove makers are still predominantly bullish on the stocks, with 17 out of 22 having a “buy” call on Top Glove and 14 out of 21 an “overweight” call on Hartalega.

Glove makers Kossan Rubber Industries Bhd and Supermax Corp Bhd, which are not among the FBM KLCI component stocks, may have market caps of RM23.74 billion and RM30.6 billion, respectively, according to analysts’ consensus target prices of RM18.55 and RM11.91.

Based on a consensus target price of RM16.37, Hong Leong Bank Bhd is projected to have a market cap of RM35.48 billion, RM3 billion higher than RM32.67 billion currently, based on a share price of RM15.04. Next within the banking sector are CIMB Group Holdings and RHB Bank Bhd with consensus target prices of RM3.41 and RM5.42 respectively, giving the banks potential market caps of RM33.79 billion and RM21.7 billion, respectively.

Analysts continue to be neutral on the banking sector on concerns of upticks in loan impairments upon the ending of the blanket automatic moratorium on Sept 30.

According to AmBank Research, the industry’s outstanding impaired loans in August 2020 declined by 1.2% month on month to RM315 million.

“While the industry’s total gross impaired loan and net impaired loan were stable at 1.4% and 0.9% respectively, the sector’s loan loss coverage increased to 98.4%. We believe this [is due to] the lower impaired loans with the bulk of SME and consumer loans still under moratorium as banks continued to top up their provisions for the impact of Covid-19,” it said.

A report by Kenanga Research attributed the recent rise in household loan applications and approvals — mainly in the auto sector and residential mortgages — to conversions into disbursements, while growth in the non-household segment was impacted by net repayments.

“Meanwhile, asset quality trend remained consistent with the trend in recent months, with system gross impaired loans down 1% month on month, decreasing 9% year on year, as borrowers took the opportunity to regularise their accounts during the loan moratorium period. Loan loss coverage rose further to 98% from 96% in July on a combination of improved asset quality and a slight build-up in reserve coverage. We keep our ‘neutral’ call on the sector with Hong Leong Bank, Public Bank and RHB Bank as our preferred picks. We also like AMMB Holdings Bhd as a catch-up play,” it said.

“Domestic loans of Maybank and CIMB grew higher than the industry’s credit growth while Public Bank’s domestic loan continued to grow slower than the industry’s. We expect industry loan growth to be 3% to 4% in 2020, underpinned by potentially further disbursements for special relief facilities for small and medium enterprises and a slightly better household loan growth in 2HFY2020 than 1HFY2020 after the easing of Movement Control Order restrictions,” the report said.

AmBank Research revised the banking sector’s calendarised core earnings growth for 2020 to -21.6% from -17.9% after adjusting its assumptions for higher credit cost. The research house projected for 2021 a recovery in earnings to 11.6% from 7.7% earlier.

In the telecommunications sector, Maxis Bhd is expected to take the lead with a market cap of RM39.25 billion, followed by Axiata Group Bhd, DiGi.Com Bhd and Telekom Malaysia Bhd with market caps of RM34.28 billion, RM33 billion and RM16.81 billion, respectively. These are based on analysts’ consensus price targets of RM3.74, RM4.24, RM4.45 for Axiata, Digi and TM, respectively.

IHH Healthcare Bhd, the only healthcare services player on the composite index currently, is projected to have its earnings for the calendar year ending Dec 31, 2020, climb 61.8% from RM605.3 million to RM979.76 million the next year.

“As countries began to reopen their borders in June, we saw a strong rebound in local patient volumes and were net profit-positive for that month. We have seen this progressive recovery in occupancy continue across July and August,” its group managing director Dr Kelvin Loh said in a news report on Sept 9.

Hospitality and entertainment counters Genting Bhd and Genting Malaysia Bhd, which have been hit hard by lockdowns, are expected to be in the red for their financial years ending Dec 31, 2020. Analysts expect Genting and its 49.45%-unit Genting Malaysia to report net losses of RM114.38 million and RM719.43 million, respectively, for FY2020. 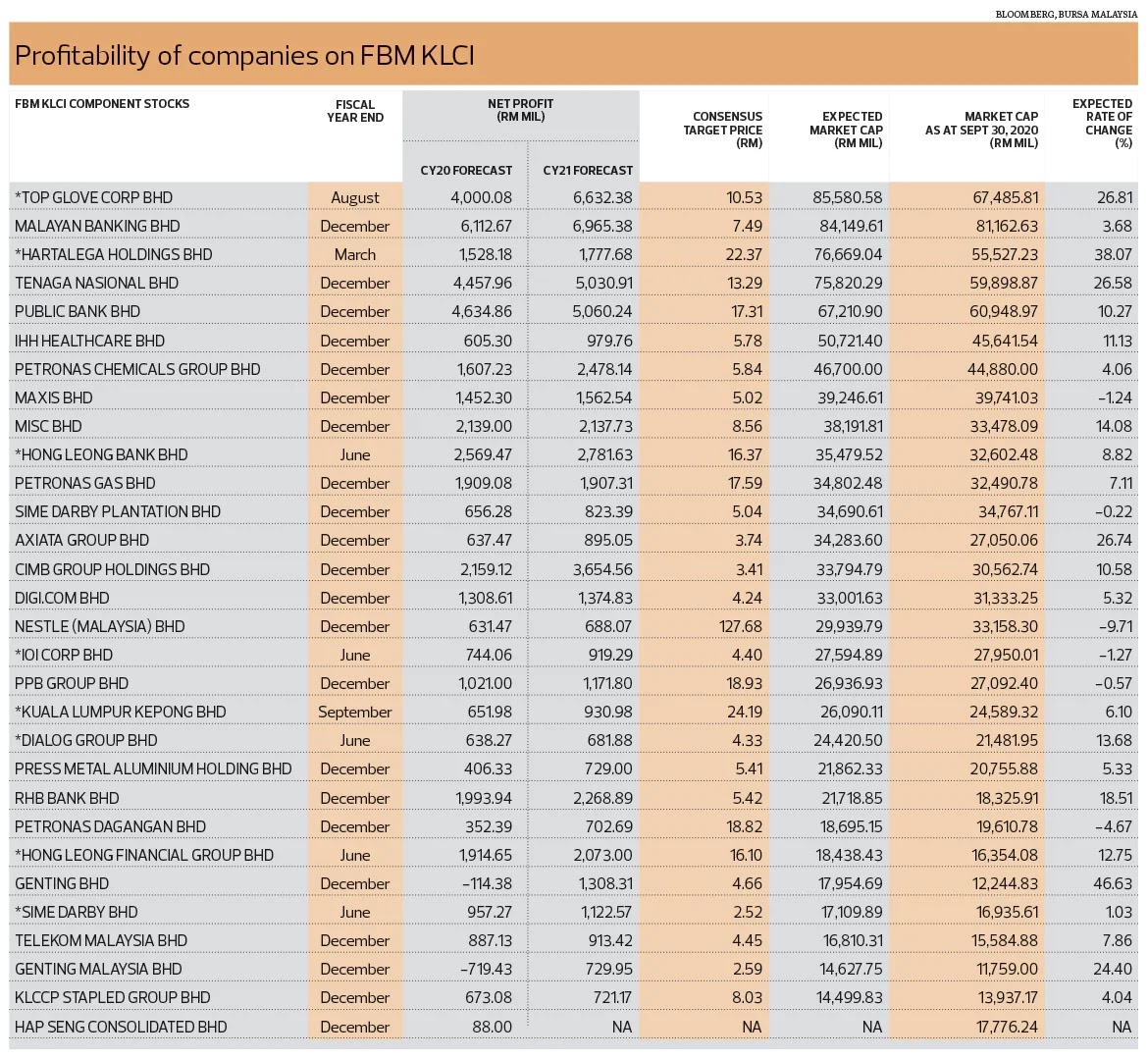