The Sony WH-1000XM4 headset can operate in Bluetooth wireless mode as well as in 3.5mm audio cable wired mode.

The audio cable that comes together with this headset only support audio in but not audio out. As such, I believe the 3.5mm AUX port on the Sony WH-1000XM4 headset also does not have audio out function to transmit your voice collected from its microphone to the connected device when it is operating in wired mode.

The built-in noise-cancelling microphone of the Sony WH-1000XM4 headset actually functioning pretty well. However, just like all other wireless headset without an attached boom mic, the location of its microphones is some distance away from your mouth. Your voice will sound a little bit "backwards" and much softer, compared to the situation of using a headset with a good boom mic. If the voice captured is too soft, it might become unclear to your listening party over the other end of a phone call or conference call.

To solve this issue, you will need another microphone, not belong to the headset, to take care of your audio out (which becomes the audio in of the receiving device, such as your computer or mobile device).

If the operating system allows separate handling of audio in device and audio out device, then you can make use of your headset to receive its audio out, while using a separate microphone to capture its audio in. Microsoft Windows can handle this kind of situation pretty well.

There also exists another kind of solution, which is using an audio cable with a boom mic that can work independently on its own. This kind of solution is easier and more convenient to use, as you don't need to mess around too much with the audio settings of your computer's operating system and/or conferencing software. With this solution, you can turn your headset into a gaming or call-centre headset that can capture your voice loud and clear.

There are several brands available in the market, including V-Moda, Headset Buddy, Audio-Technica, Geekria, etc. I have chosen Geekria mainly because of its price of around RM35 only, and it works well like those more expensive counterparties. 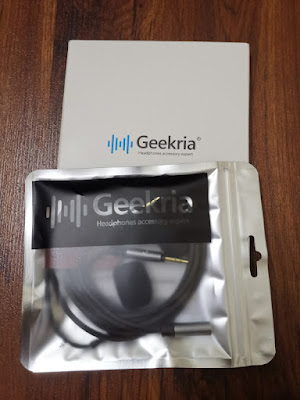 My Geekria stereo audio cable is 1.7 meter long, which is a perfect length that is long enough for your convenience to use, yet not too long for easy storage.

Inside its packaging contains: 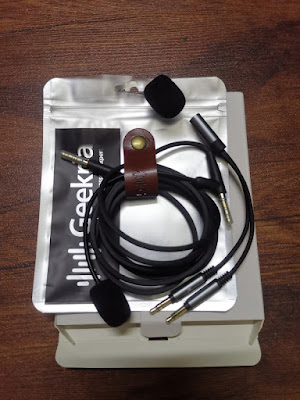 Its boom mic is attached with an adjustable cord.

If your computer's 3.5mm audio port supports both audio in and audio out, you don't need to use the Y adapter cord, and can just plug it in as shown in the photo below. 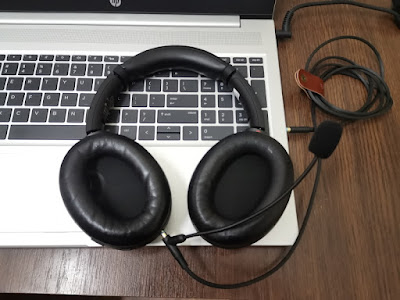 If your computer has separate 3.5mm ports for audio in and audio out, you can plug it in by using the Y adapter cord, as shown in the photo below. 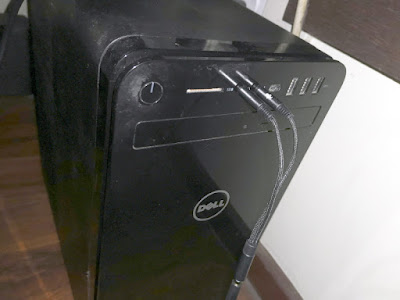 This Geekria stereo audio cable with noise-cancelling boom mic is fully compatible with the Sony WH-1000XM4 headset, as well as the earlier versions of WH-1000XM3, WH-1000XM2, and most other models of Sony headset.

With this, your voice will be recorded loud and clear, with unnecessary ambience noise filtered out properly, and with any echoing problem.

Try it out, and you will be able to notice the tremendous difference of using it than using the wireless microphone in the headset.