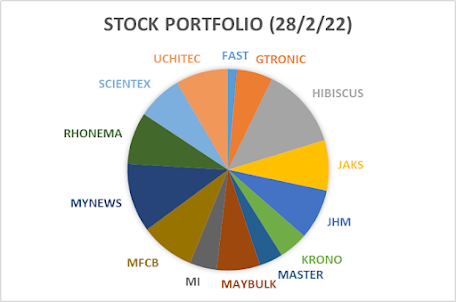 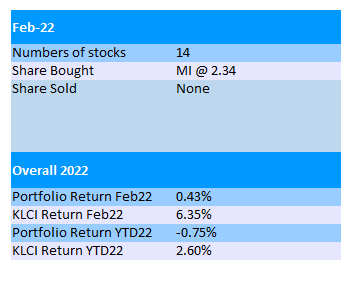 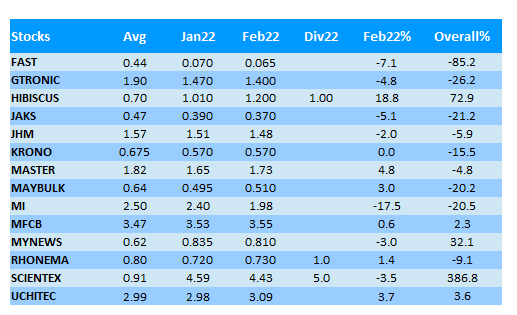 In Feb22, KLCI registered a superb monthly gain of 6.35%, mainly due to the gain of blue chips plantation and banking stocks.

Technology related stocks continue to suffer as there seems to be a second round of sell-off.

My portfolio has quite a number of tech-related stocks but it has been "saved" by Hibiscus again. Overall it's a flat month to me.

The hottest headlines recently is undoubtedly the invasion of Ukraine by Russia. It has resulted in the spike in certain commodities price such as crude oil, crude palm oil, soybean and aluminum etc.

When the US warned the world of the potential invasion of Ukraine by Russia earlier in February, I think not many people believed that it will ever happen.

We are living in a modern "civilized" world now. Even though there are still lots military conflicts around the globe, an "unprovoked" invasion of a sovereign country by a super power is almost unheard of.

Perhaps Ukraine or certain country has done something that provoked Russia but such brutal action of destruction to properties and life is definitely not right.

Ukraine is an important producer of crops such as corn, soybean, wheat and sunflower oil. The concern of their supply disruption has resulted in the sudden rise in price.

Due to the fear of edible oil shortage, panic buy has driven up all the vegetable oil's price. 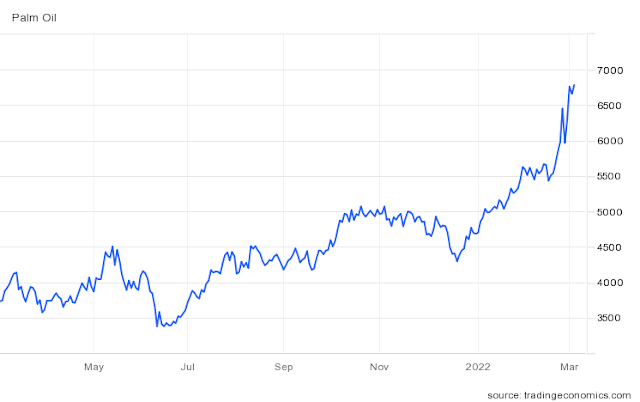 Meanwhile, the disruption of aluminium production and logistic in Russia helped propelling aluminium price to historical high of over USD3,700/T.

Russia is the world's third largest aluminium producer in 2020. 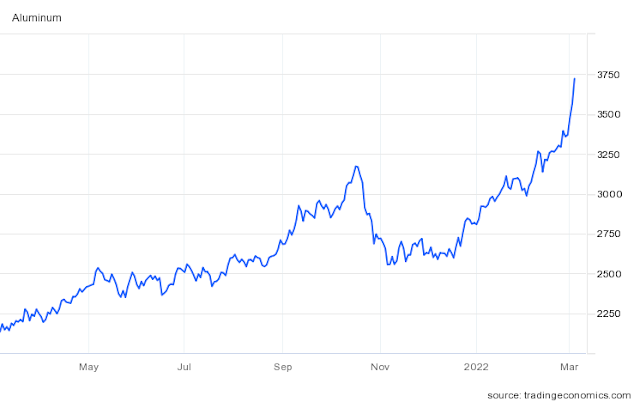 Global sanctions of Russia is expected to disrupt Russia's sales of its crude oil and natural gas, giving rise to the rally of crude oil price.

Brent oil price has appreciated more than 20% in one week's time to reach almost USD120/bbl since the war started on 24 Feb22. 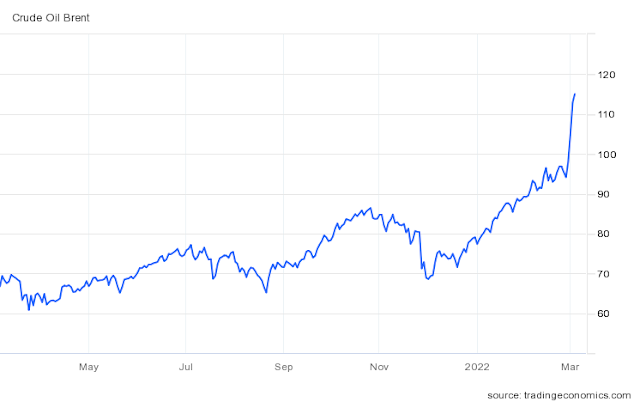 Russia is the world's second largest crude oil producer after the US. In 2021, Russia contributed 45% of European Union natural gas import and 40% of EU's total gas consumption.

As the war and sanctions have just started, we're not sure how long those commodities prices can sustain at such high level.

Definitely they will drop back, just how soon and how fast it will drop.

Recently released FY22Q2 result of Hibiscus (EPS 2.42sen) was good as expected. I'd expect an average quarter EPS of at least 5sen after the acquisition of Repsol assets was completed on 24 Jan 2022.

Its share price has gone up in tandem with crude oil price and closed at RM1.30 today, up 61% year-to-date. 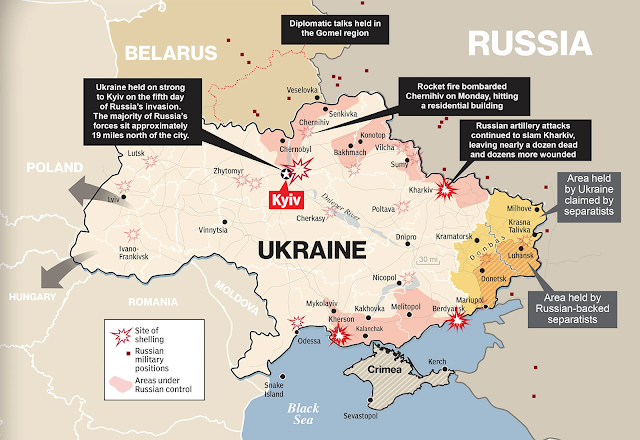 All companies in my portfolio announced good quarterly results in Feb22 except Jaks.

Jaks registered loss after tax and minority interest of RM28.5mil in its FY21Q4, mainly due to impairment losses of RM50.4mil and forex loss of RM6.1mil in the quarter.

Share of profit from its Vietnam power plant dropped from RM43.4mil in immediate preceding quarter of FY21Q3 to RM28.6mil in current quarter.

Total near full year contribution from the power plant is RM139.3mil which is lower than previously guesstimated figure of RM196mil.

Vinh Tan 1 which is very similar to Jaks Hai Duong power plant, started to pay out dividend exactly one year after its commercial operation date (COD).

As Jaks Hai Duong's full COD date is Q1 of CY2021, I hope Jaks can start to receive dividends from its power plant investment in Q1 of CY2022, albeit small amount in the beginning.

Vinh Tan 1's dividend payout can reach RM330mil a year. This means about RM100mil to Jaks who has 30% share.

MI's FY21Q4's result (EPS 1.4.3sen) was not spectacular but widely within expectation. The good news to me is that its cashflow has "normalized" to give a positive free cash flow in FY21 which is the first time since listed in 2018.

I topped up a bit of MI's shares earlier at higher price of RM2.34 just to complete my first batch of accumulation. It's at the wrong timing again but it's just a small amount anyway.

MI's share price dropped 17.5% in February and it's the worst performer in my portfolio. Currently its share price is at just RM1.82.

Previously I was not too interested in ATE (Automatic Test Equipment) stocks as I thought their sales might not be easily sustainable due to lower volume nature.

That's the main reason I gave Vitrox a miss when it was traded at RM3 before recent 1:1 bonus issue.

Currently I'm still not very keen on ATE compared to OSAT companies, but the horizontal diversification plan of MI attracted my interest.

Its expansion into semiconductor materials space is interesting in my opinion and I don't think the management will be content with only solder balls business.

I think in longer term of 2-3 years time, MI should worth more than what it is now.

This shows very clearly that I prefer smaller companies but this kind of investment strategy could be wrong many times.

I owned Inari shares before and followed its annual profit from RM40mil going up all the way to RM250mil. I disposed all in early 2020 thinking that further profit growth would be very difficult.

However, its annual profit will reach RM400mil this year.

The FY21 annual net profit of Gtronic is at RM52.9mil and it's far from its best ever net profit of RM75mil achieved in year 2015.

I just bet that Gtronic can start to grow in faster pace in current semiconductor upcycle like its peers but so far it still does not show a lot of good signs.

It has discontinued its quartz crystal timing device business and its tax incentive pioneer status will end in mid 2022.

Its "7-star CEO" Mr Heng Huck Lee will retire in May 2022 and he will be succeeded by his daughter who is already a Vice President of Business & Operation.

So I don't expect a significant change in the company's direction which might or might not be good news.

Perhaps the company needs a drastic change after being stagnant for so many years.

Anyway, dividend payout is still generous with final + special dividend of 3sen declared recently. This brings the total dividend of FY21 to 7.5sen (out of EPS 7.9sen). It's a dividend yield of 5.4% at share price of RM1.38. 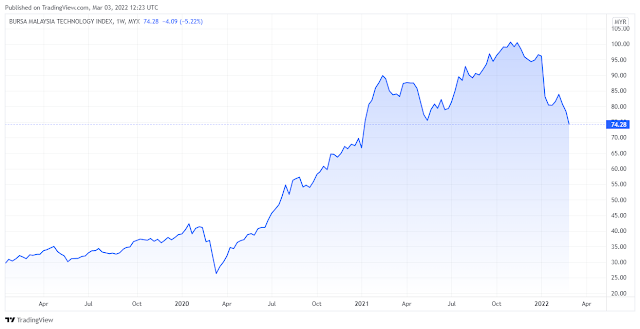 JHM FY21Q4's revenue and PATAMI of RM94.8mil & RM12.9mil are both its historical high, despite being helped by backlog in previous quarter.

There is other operating income of RM4.7mil offset by RM2mil forex loss in the quarter. Without these items, overall result is still good in my opinion.

In the commentary of prospect, the management says that the revenue in USD term is expected to grow by a low-teens percentage year over year in FY2022, supported by growing demands of its products and services.

Master's result (EPS 5.85sen) was slightly below my expectation due to increase in cost.

MFCB's FY21Q4 profit is exceptionally good due to one-off bargain difference of RM125mil arising from the acquisition of oleochemical business.

Without this, its profit is still good with stable income from hydro plant and commendable growth in its packaging division.

Two new packaging factories (for Hexachase & Stenta each) are being planned and both are expected to be completed in 1H2023.

The construction of 5th turbine in Don Sahong dam has just started in Dec21 and is only expected to be completed in Q3 of 2024.

Its venture into fresh milk processing business with Kulim Bhd is still in early stage while Farm Fresh has just confirmed to be listed on 22 Mac22 at RM1.35 per share, valued at PE of 36x.

Without this one-off gain and RM2.7mil provision for expected credit loss on trade receivables, it can still register core net profit of around RM19mil (EPS 1.9sen) for its FY21Q4.

BDI has dropped remarkably since reaching peak in early Oct21. It has fallen non-stop in the whole final quarter of 2021 from 5,600 to 2,200 points.

This drastic correction was reflected in Maybulk's share price which has also dropped from 80sen in early Oct21 to 50sen at the moment.

Some shareholders might have questioned the management's decision to sell its vessels when the freight rate was super high last year. Now it seems to be a wise decision.

Maybulk has turned an RM184mil accumulated loss just one year ago to RM8.6mil of accumulated profit now.

Historically when there was a spike in BDI, there was a double peak pattern. I wonder whether it can happen this time.

Anyway, it will be great if the BDI can stay above 2,000 points in mid term. 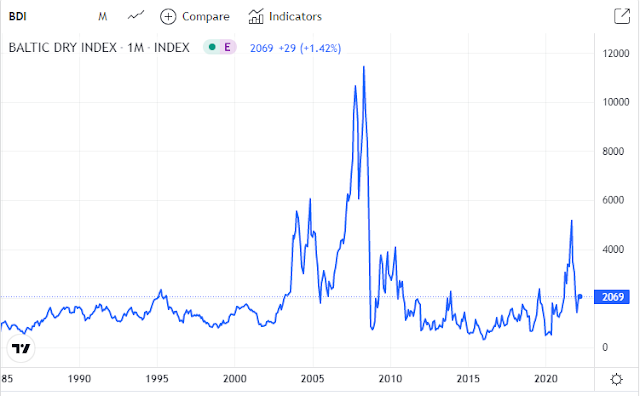 In Mac22, Russo-Ukrainian war and US interest rate hike will dominate the news. Generally I'm not too optimistic about the stock market this month.

Nevertheless, the best time to buy stocks is when everybody else is pessimistic.

Plantation stocks are flying high at the moment, is it wise to buy them now? Some of them still have relatively low PE ratio despite recent jump in share price.

If I already have plantation stocks sitting on decent paper profit, I might want to hold and ride current uptrend.

The reality is I don't have any of them and investing for mid term seems a bit risky as CPO price might drop at the same speed as it rises.

Currently there are quite a handful of stocks in KLSE trading at low PE especially in the industrial and manufacturing sector.

Many steel companies are trading at low single digit PE, is it worth to put my money in?

I opine that the best quarterly profit for most mid/down stream steel companies are over, as profit margin should normalize unless steel price goes up past previous high.

While the market gave them PE valuation of below 5 when their profits were at record high, can their share prices go up when reporting declining profits later?

It's still possible depending on market sentiment. Who knows at some point of time the war may push up the steel price?

Recovery stocks do not really perform very well in 2021. Is 2022 the year of real recovery in their stock price?

How about property and construction sector after being "dead" for so long?

I guess construction sector should have its good time some time in 2022. The revived MRT3 project might spur the interest and we are also close to general election.

Recently I read that open tenders for MRT3 civil works could be issued in Q2 of 2022, with contracts awarded in Q4 2022 while commencement of work could be in early 2023.

Currently I have one stock in construction sector which is Jaks but it's mainly for its utility business (coal power plant & solar farm).

I do hope that it can get some water-related construction contracts which is its area of expertise.

I might want to add another construction stock into my portfolio though.

For tech-related stocks, as I have decided to put my money in MI, Gtronic & JHM instead of Greatec, MPI & D&O, I don't think I should add more tech stocks into my portfolio.

The latter three seems to be better companies compared to the former three. Previously the share price of the latter three are "expensive" but now they are much "cheaper". Should I change the ships?

So far I don't have such plan but of course I can't rule it out entirely.

No one knows when the war in Ukraine will end. Initially I thought Russia can control Ukraine in lightning pace but now it seems like this is not the case.

Will Russia deploy nuclear weapon in desperation? If it does, then we better brace for a stock market crash.

Through economy sanctions, lots of international brands such as Apple & Nike have announced their withdrawal from the Russian market. Will it have any significant effect on the business of companies listed in Malaysia?

Anyway, I pray that China will not get involved.