Hi to all fellow investors and traders !
Today I would like to highlight the following counter:
POS MALAYSIA BERHAD or POS (Code 4634, Main Market, Transportation & Logistics)
POS - Special Thanks to KKMM Minister YB Gobind Singh Deo for Shedding Light on Tariff Hike Proposal !!!
Here are my thoughts :
1. Special Thanks to KKMM Minister for Sharing Updates on the Tariff Hike Proposal First of all I would like to say thanks to our Kementerian Komunikasi dan Multimedia (KKMM) Minister - YB Gobind Singh Deo for sharing on the latest updates on the tariff hike proposal as per news article below.
https://www.theedgemarkets.com/article/decision-postage-rates-be-announced-soon
Thank you for being proactive in this matter and sharing the updates with the public, be it whether shareholder of POS or not.
Last rate hike was done in 2010. Since then, POS company cost and expenditures have increased but the rate has remained the same. It has been 9 years and I believe that it is fair for POS to get an upward revision of the postal tariff to ensure they can sustain their operations.
In the article, it was mentioned that an announcement on this matter could be made earliest by early of October, where the parliament will be sitting starting on 7th October 2019.
I wish to see a more active role by POS management itself, to update the public and its shareholders on this matter. Last time we heard from them on this was in the July 2019 The Edge Weekly (22-28 July Edition) newspaper.
2. High Chance of Postal Rate Hike to Be Accepted - for POS to Continue Delivering its USO as Per Postal Services Act 2012
In order for POS to deliver its Universal Services Obligations (USO) as per Postal Services Act 2012, it needs to be operating at least on minimum profit or breakeven.
Refer below image on the latest quarter reports filed by POS. In the most recent report of August 2019, POS still continued to report losses. They have now recorded 4 consecutive quarter losses. And the main contributor for losses was the traditional mail segment (domestic and international - refer image below of the segmental information taken from latest Aug 2019 QR).
I am not sure how far longer POS can sustain their business by making losses. However, I believe a tariff hike is due, at least to ensure that the traditional mail segment is at minimum on BREAKEVEN to be fair to POS as it cannot simply shutdown its branches (even thought they are losing money) due to their obligation to the USO and the Postal Services Act 2012.

3. TA Update - Forming Cup and Handle Pattern - Resistance at RM 2.25 on Breakout
Refer below weekly chart of POS. A few observations below:
i. POS was trading at RM 3.00 - 3.25 range before it announced its first quarterly loss in November 2018 report
ii. A Cup and Handle Pattern is forming, with the recent uptrend in price. Breakout point is RM 2, with first resistance at RM 2.25 upon breakout
iii.. Stochastics crossing upward, indicating bullish momentum ahead
iv. Volume is building significantly, together with the price increase 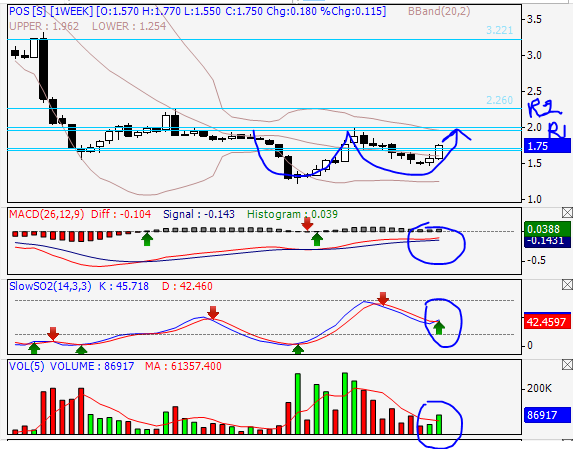 CONCLUSION
Based on my opinion, I believe POS should be seeing interesting trend in the weeks ahead. based on below:
i. Rate Hike Announcement as Early As October, Once the Parliament Has Started Sitting
ii. High Change of Rate Hike Approval, Due to POS needing to Service its Obligation under Postal Services Act 2012
iii. Bullish Momentum Seen in the Charts, Thru Formation of Cup and Handle Pattern, Building Volume and Positive Stochastics
Thanks for reading and see you in the next post.
THE ABOVE IS NOT A BUYCALL AND ONLY A PERSONAL OPINION ARTICLE AS A SHARING TO BSKL COMMUNITY MEMBERS.
Yours Truly,
INVESTHOR