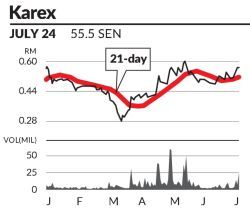 Karex Bhd (stock code: 5247) slipped on Friday in a sign of consolidation after three consecutive sessions of gains. After spending the morning session in positive territory, the share price lost momentum over the course of the day to end near the immediate support of 56 sen.

However, there continues to be a bullish pattern in the stock, which is currently trading above all the key simple moving averages (SMA). Going by the bullish sentiment, the uptrend is expected to continue following a pause in the rally while the technical indicators fully neutralise.

On the daily price chart, the outlook has been growing more positive going by the 50-day SMA having topped the 100- and 200-day SMAs in a “golden crossing”, which signals a bullish trend.

At current levels of trading, there remains room for the bulls to roam as the resistance rests in the 63 sen to 64.5 sen range, which would see the stock reclaim its peak level for the year.

On Friday, the trading volume was also seen growing to two-month highs indicating a return of investor interest in the stock.

Confirming the start of a consolidation phase, the technical indicators have descended from overbought conditions in light of yesterday’s share price decline.

The slow stochastic bounced off the overbought line to give a “sell” signal while the 14-day relative strength index also spiked lower after briefly crossing into overbought territory, which confirms the consolidation phase.

This comes in contrast with the daily moving average convergence/divergence line pacing higher in positive territory, which suggests the uptrend remains in play.

Should the stock rise above the 64.5 sen resistance, a higher price target can be seen at 72 sen. Support for the stock is found at 56 sen and 54 sen.

The comments above do not represent a

recommendation to buy or sell.