On August 04, 2020
Well, it did catch almost everyone by surprise. The announcement by Bursa to have a ceiling price for a few counters. It is a long-standing rule, it wasn't invented on an ad hoc basis. First of all, I don't think any of the normal "metrics" were broken: e.g. lots of trades being rolled over; suspicious trades to move prices higher, etc... One can see that the buying was genuine and the retail army was very formidable.

According to Bursa rulings, when a stock or warrant hits a limit up or limit down for two consecutive trading days, "as the case may be on the next market day, the exchange may maintain the trading price at the last done price of the previous market day for such period as specified by the exchange"

"MAY" is the key word. Kudos to Bursa for doing so. 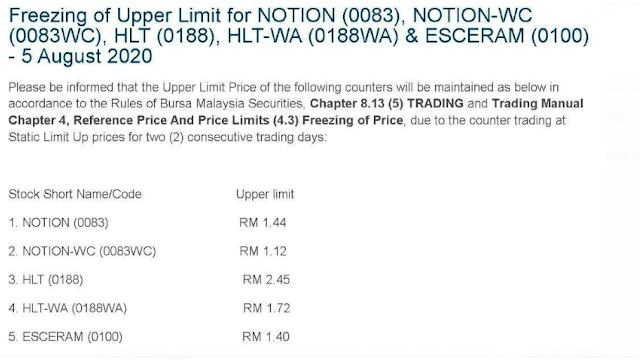 Even after a few bouts of "proper correction" in the gloves sector, the band marches on. Some of that retail liquidity moved into small caps and soon a bull market reminiscent of the 90s was born. Apparently, some 3m new CDS accounts were opened over the last few months. Something unthinkable has happened. When Covid19 started baring its fangs, many countries imposed MCO, and the general belief was that EVERYTHING should be down and out. Many certainly believed that equity markets were a sure write off for the rest of the year.

What happened was confounding. Not only did equity not tank and die, but they also staged a remarkable turnaround, unleashing a liquidity surge like a dam being cracked open. Who saw that coming?

Governments and central banks opened their wallets. While a substantial portion of the real economy is still in tatters, the stock market went off on its own tangent. I did turn bullish too a couple of months back, and as in any proper bull markets, there will be excesses.

The Bursa rule, to me, is right and proper. Daily volumes were hitting record levels and being broken again and again. A genuine exchange may just be a conduit to transact trades. If trades were genuine, no one should stop them. Alas, we are in an imperfect world, where herd mentality and over-exuberance can cause untold ramifications if not held in check.

That is why most markets have circuit breakers, to prevent a stampede. To provide a cooling-off period when things get silly. Greed and crowd mania can be very bad things when they get out of hand.

I am not saying markets need correction but let's all take a breath, step back, and reassess. Circuit breakers are there to SAVE OURSELVES from ourselves.