THE recent announcement that Duopharma Biotech Bhd is one of the few companies selected to package the Covid-19 vaccine once it is developed, sent its shares skyrocketing as investors rode its potential long-term prospects.

On July 14, Science, Technology and Innovation Minister Khairy Jamaluddin announced that Duopharma and Pharmaniaga Bhd will be undertaking the fill and finish processes for the Covid-19 vaccine once it is found. Prime Minister Tan Sri Muhyiddin Yassin has agreed for the facilities of the two companies to be utilised for that purpose.

Shares of Duopharma have soared close to 90% this year, riding the momentum of the past two weeks.

On July 22, the government-linked pharmaceutical company saw its share price reach an all-time high of RM2.96, before pulling back slightly as investors booked their profits.

Moreover, Khairy had clarified that the selection of companies would not be limited to Duopharma and Pharmaniaga.

Commenting on the time frame for the development of a vaccine, Duopharma group managing director Leonard Ariff Abdul Shatar points out the many factors to be considered.

“Is there a possibility that a successful vaccine candidate will come about within the next six months? The answer is definitely, ‘Yes’. However, I think people just have to be cautious as there have been so many mutations of the coronavirus. So, will we have an actual successful vaccine candidate that will work on all mutations? That’s a big question mark,” he concedes.

Health experts in the US have also hinted that it could take two injections or possibly more to cater to the different mutations, Leonard tells The Edge. 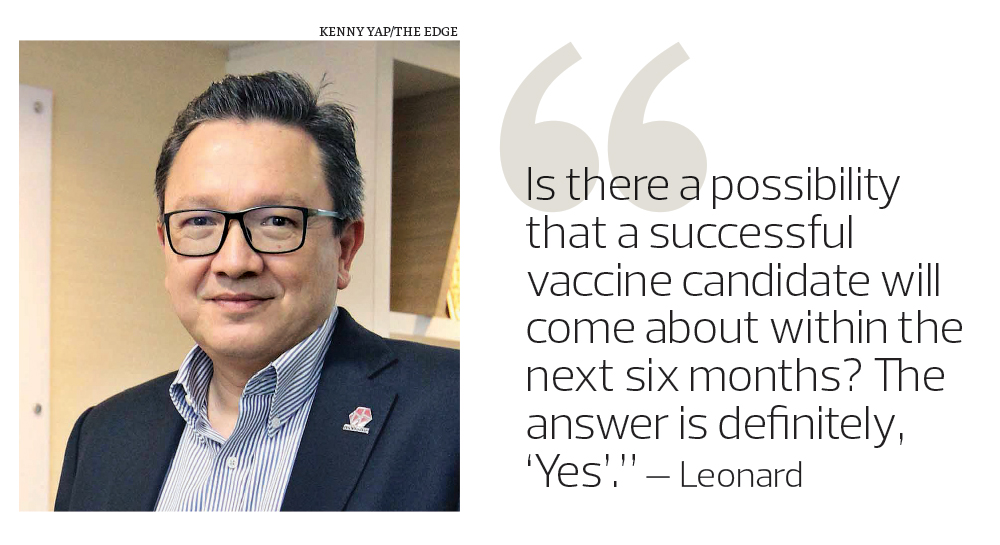 He explains that a vaccine will first have to pass a human trial where it is developed, which could be in the US, China or elsewhere. Countries may then choose to buy it wholly packaged or do the packaging themselves.

According to Leonard, Malaysia is open to both options, however electing to complete the fill and finish process ourselves could speed up the process further.

Once a vaccine is ready, the Ministry of Health will have to do the necessary regulatory checks on local pharmaceutical companies to validate the facility’s use for the successful vaccine. This process could take about two to three weeks from the time a vaccine is developed, he adds. In terms of readiness, Leonard says Duopharma already has a dedicated line for human vaccines that is not being utilised, and it will not require much investment or upgrade to prepare for the process.

“For us, there’s nothing we need to do because our line is ready. It’s one existing line with a capacity for 12 million vials. Eventually, when a vaccine is found, we will need to see what the dosage level is; let’s say one vial could be for 10 patients, so our 12 million vials could cater for a population of 120 million,” he explains.

This aside, the company’s growth continues to be driven mainly by its consumer healthcare segment, energised by strong sales of its Flavettes Effervescent vitamin C product — a bright spot amid the Covid-19 pandemic.

The group’s earnings for the first quarter ended March 31 (1QFY2020) were impacted by a stronger US dollar, resulting in a 6.25% drop in net profit to RM13.56 million from RM14.47 million in the previous corresponding period.

Leonard remains cautiously optimistic about the group’s performance this year and about the industry in general, even though the pandemic has been a huge shock to the system with demand patterns totally changing.

“If you talk to pharmacies and ask if their sales have gone up, they will say they have but that they have largely been driven by immunity [boosting products], masks, gloves — anything that supports a lifestyle with Covid-19. But a lot more of the discretionary spend items have actually seen a drop in sales,” he says.

He notes that the group’s supply of products to the government, which make up 50% of sales, help to cushion the pandemic’s financial impact on the company.

On a potential second wave, Leonard says both the government and Duopharma are more prepared than they were three months ago.

Duopharma has also been working to support the growth of the halal pharmaceutical industry. It participated in a recent webinar with KPJ Healthcare Bhd and Halal Development Corporation to promote the industry abroad.

Supporting the growth of Malaysia’s halal pharmaceutical industry will inevitably benefit the company as all of Duopharma’s products are certified halal, says Leonard.

He adds that the group’s strategy is to target the young Malay segment by using a functional and emotional approach, be it in Malaysia or around the region in countries such as Indonesia and the Philippines, as Asean still remains its main market overseas. “We had recognised that the Malay consumer percentage was increasing, and their disposable income was increasing, especially among urban Malays. However, we decided that rather than just target urban groups, we would target Malays in general, irrespective of where they were located. And that’s proved extremely successful.

“We used to have Champs for children below 12, and then there’s Flavettes, which everybody said was for adults above 35. There was a huge market in between, so we had to find a way to make our products more relevant to the younger group. That’s why we came up with products such as Flavettes Glow with glutathione. Now you can take your vitamin C and improve your complexion,” says Leonard.