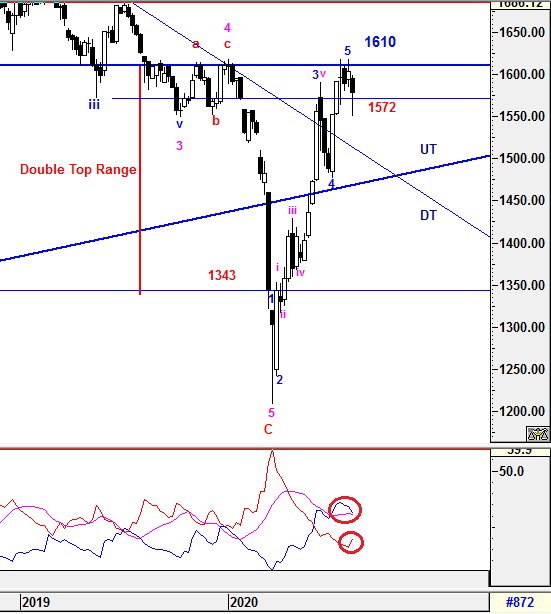 KLCI was able to close above 1572 after retraced from 1549.62. However, it was still closing below 1580.39 marginally to realize Bearish Engulfing formation which had formed in prior weeks. Therefore, weaknesses ahead may still emerge.

On the other hand, the higher degree of correction will be elaborated further in daily time frame.
-DMI (red line) is starting to curve up indicates bearish momentum is increasing. +DMI (blue line) is heading down with greater margin indicates bull strenght continue to slow down. ADX (pink line) is turning flat which implying the volatility of the current bull trend is uncertain. Therefore, the summations of the 3 signals above is implying uncertainty remains and knee jerk reaction is unavoidable as expected.
Prevailing trend could be emerged if levels listed below was broken:
Resistance - 1610
Support - 1572
Daily Time Frame 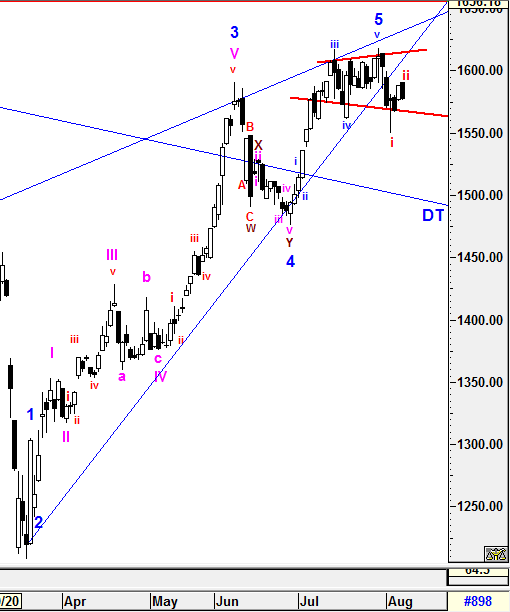 Due the magnitude of the proceeding waves after the the broke down of ascending wedges formation, the correction of ABC-X-ABC formation is to be abandoned. Therefore, the higher degree of 5th wave is assumed to be ended at 1618 on 29/7/2020. If this is valid, 2 out of 3 sub minutte waves might still being constructed to complete wave A which has yet to met its minimum criteria.
On the other hand, an expandnig flag/triangle is formed which consolidation phase being constructed before preceeding trend emerge if break out take place from either upper (1616) or lower line (1566).
If the breakout realized, it create another 2 possibilities as below:
1) If break out at lower line at 1566, it will lead to form 3rd minutte wave to end wave A at lower lever.
2) If break out at upper line and move above 1618, It would indicate higher degree of 5th wave could still underway and would end at higher level which has yet to be ruled out. Instead of the prior correction of ABC-X-ABC formation, a new complex wave forms could be emerged to end the correction of 4th minuttes sub waves which would be reviewed again.
All waves' count and projected target are generated based on past/current price level and it may be subjected to vary if degree of momentum movement change.
Prevailing trend could be emerged if levels listed below was broken:
Immediate resistance - 1616
Immediate support - 1566
Support - 1536
Let's Mr Market pave the waves.
Trade safely
Wave Believer