Full Research Coming Out This Evening

This pandemic resulted in an Online Delivery Boom, as demand for online delivery of goods increases drastically.

This resulted in large increase in demand for logistics services, whether as a “Last Mile Provider” or “Warehouse/Integrated Logistics Provider”.

However, POS Laju is a major laggard, despite being the most direct beneficiary of the E-commerce Boom.

This is not justifiable, given their position as the largest last mile provider with the widest reach in Malaysia, with the strongest market share among SME’s and Consumers, which are the current and future main driver of E-Commerce.

The Transformation of POS Malaysia

& Taking Advantage of a Crisis

What are the things POS Malaysia have spent the last 3 years doing in order to be perfectly poised to take advantage of this crisis?

They have grown exponentially (with the numbers exploding upwards due to the CMCO), and now have 86,000 users (and is on track exceed its initial target of RM30 million in Revenue for its first year.

According to the CEO, it is currently hitting 2 million parcels a month in September (this translates to around RM13.2m a month in additional revenue, given average revenue per parcel of around RM6.6 (RM21.7m revenue generated, 3.3 million parcels delivered from SendParcel for Oct 2019 – June 2020).

Their first one in Senai Airport (costing RM40 million with the capacity to process 120,000 parcels a day) will be completed in 2021

To meet this increased demand, POS Laju decided to launch the POS Rider Scheme, which paid their riders purely on commissions (They took in an additional 1,300 riders initially). This bypasses their Unions and makes these additional costs a purely Variable Costs instead of a Fixed one.

If a rider manages to delivery 150 packages a day (basically work 24 hours a day, assuming 10 minutes per package) and works 6 days a week. They are theoretically able to hit RM10,000 per month in income (This is gross, before accounting for maintenance, fuel etc which is borne by the riders, like GRAB). Making it very popular these days when unemployment is high due to the pandemic.

This also appears to be the model POS Malaysia will be taking in the future, likely reducing their overall “all in” cost in the future.

Since April, POS Malaysia have taken to directly engaging with Cargo Flight Services to supply the sudden increase in demand. Increasing the capacity of cargo transportation from 200 tonnes a week to 510 tonnes a week.

And all this during a time when rates for planes are at close to all-time lows, from jet fuel being so cheap these days (it used to be the highest and most expensive grade), that it is even being blended and used in Ships (which typically uses the lowest grade).

They have brought forward their plans to spend RM100m to digitalize their core systems, including a new track-and-trace system, to drive up revenue and service quality up while containing costs.

The new core systems are expected to be fully operational by mid-2020, with the peripherals and sub-systems to follow.

Since the entry of the new CEO, POS Malaysia have taken steps to dispose of partial stakes of their Non-Core Business, to business partners with the capability to run it well. Just like Proton.

Syed Mokhtar has put his daughter on the Board of Directors in his companies, from MMCORP, Tradewinds, DRB-HICOM and of course, POS Malaysia.

The daughter, Sharifah Sofia Syed Mokhtar Shah, have very good credentials and was an external consultant for the Bill & Melinda Gates Foundation, where she produced an integrated index to measure women’s empowerment and submitted a list of realistic recommendation on empowering women in various age groups.

In addition, in POS Malaysia, Syed Mokhtar changed 3 CEO’s in 2 years, in search for the right person, and most of them have very Non-GLC backgrounds, whether it is an ex Airasia C-Suite member, or people who worked for a long time in his other companies.

In addition, the new Chairman, Datuk Yasmin binti Mahmood, is also very competent, and the former Managing Director of Microsoft in Malaysia.

Syed Mokthar was the person who dared to sell 49% of Proton to a Chinese company, and have a Chinaman run it. This is clearly not your typical GLC.

The Art Of Turning Weakness

Is the company inefficient? 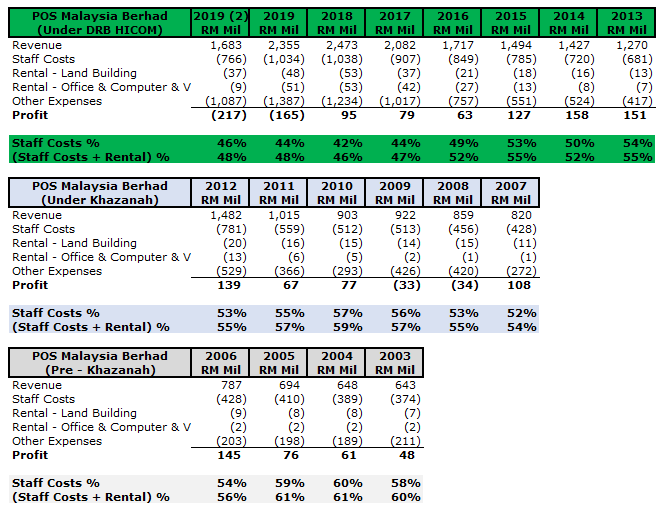 Since being taken over by DRB-Hicom/Syed Mokhtar in 2012, POS Malaysia have steadily recorded a reduction in Staff Cost % over Revenue.

POS Malaysia staff cost as a percentage of Revenue, is lower than that of GDEX.

GDEX’s staff costs % have been steadily increasing over the years, while POS Malaysia’s have been staying even or reducing.

Why is this the case? Which brings us to the second point. 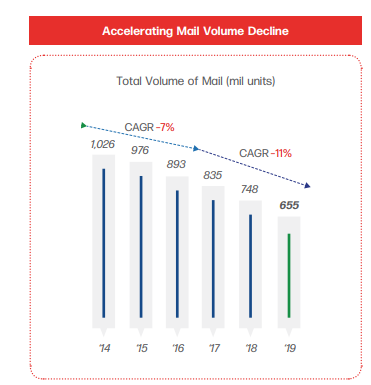 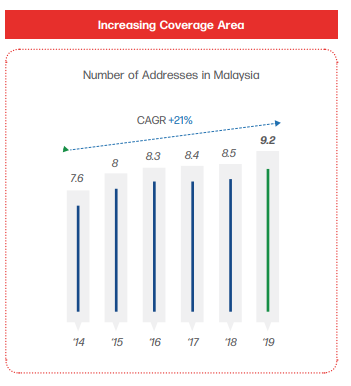 With email, internet and mobile, Usage of mail have fallen.This is a high volume, low value, low margin (if any) business, whose selling prices is capped by the government. Cost are also escalating every year from inflation and the governments requirement for increased coverage area (as they are a Universal Service Provider).

From 1 February 2020, when POS Malaysia got government approval for a postage rate increase for registered mail, commercial mail and small parcels below 2kg.

This increase in rates and is expected to contribute an additional RM100 million to RM150 million in pure net profit per year to POS Malaysia and help to reduce the cost of providing this service significantly.

Is the reduction in usage of Mail a bad thing to POS Malaysia?

Courier (“POSLAJU”) & Mail used to be different divisions with their own sorting centre, routes, delivery staff, and delivery vehicles etc.

Since DRB Hicom took over in 2012, due to the increasing size of POSLAJU, POS Malaysia have taken steps to merge and consolidate these operations. Today Postmen deliver both mail and parcel, depending on route.

As operations are now consolidated, it be better to drive 5km to deliver POSLAJU package instead of “Mail”.

With their consolidated “Courier” and “Mail” segments, the reduction in “Mail” items and the increase in “Courier” items means that, POS Malaysia’s Postal operations is transitioning upwards in the value chain from low value items, to high value items that include tracking.

How is POSLAJU growth vs GDEX. 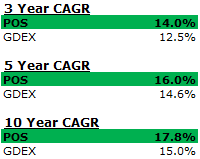 Whether on a 3 Year, 5 Year or 10 Year basis. At every level, POS Laju have grown faster than GDEX. Really very laju. Why?

As a Universal Service Provider, they have the largest nationwide presence.

This network was built up over 100 years by POS Malaysia.

Other courier service focus on large e-commerce players, which have high volume, but much lower margin, and constant renegotiations on price due to strong negotiation power.

For the consumer and small e-commerce business, the first thought and choice is POSLAJU. Its very easy to find POS LAJU outlet, where do you find GDEX or J&T outlet?

Consumers or small e-commerce business do not get to negotiate on price, and pays list value.

E-commerce is largely driven by small businesses. The top 100 largest spending (less than 0.1% of business users) on Facebook, constitutes of only 17% of their revenue. It is the SME’s who do online Facebook live shows, or have a small e-commerce stores etc like these who will drive e-commerce. 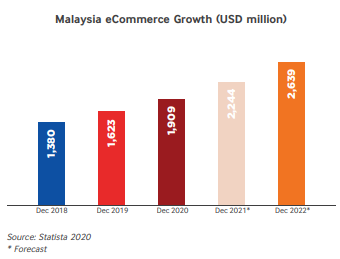 And this trend is only going to be accelerated by this pandemic and keep booming upwards in the coming years. It is far easier and cheaper to maintain a network of about 1,000 contact points to grab this consumer/SME market, than it is to build one from the ground up.

At this inflection point for POS Malaysia, looking at the rise of ecommerce and the boom in the parcel business, they are now going all in into POSLAJU and optimizing every inch of it.

When POS Malaysia changed their CEO to Syed Md Najib in 2018, they embarked on a 5 year transformation plan, starting 2019, with plans to breakeven by 2021.

During a 20 September 2020 interview, he said, due to increased postal revenue from its SendParcels business as well as measures to increase the efficiency of its operations. The original plan to breakeven for the year by FYE 2021, have been brought forward a year to FYE 2020.

Is it possible? Let’s look at Postal Segment results for Q1 and Q2.

Above numbers are “Year to Date”. They are cumulative and not for Q1 and Q2 separately. Breaking it down into the individual quarters, and 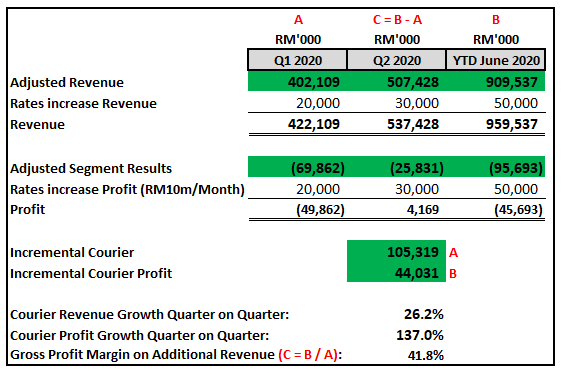 Firstly, we exclude the additional revenue and profit from rate increase since Feb 2020. It was projected to be RM100m to RM150m pear year. We estimate this to be Rm10m per month.

In Q2, Postal Segment actually recorded a profit of RM4.2 million, versus the RM49.9m loss in the previous quarter.

As this segment has high fixed costs (but low variable costs), we need to calculate the Gross Profit Margin of the Additional Profit and Additional Revenue for Q2 vs Q1.

Using above Revenue Growth Rates for Q2 and the Q2 Gross Profit Margin on Additional Revenue, Projected Revenue and Profit for Postal Segment for Q3 alone is RM640.3m and RM59.7m. 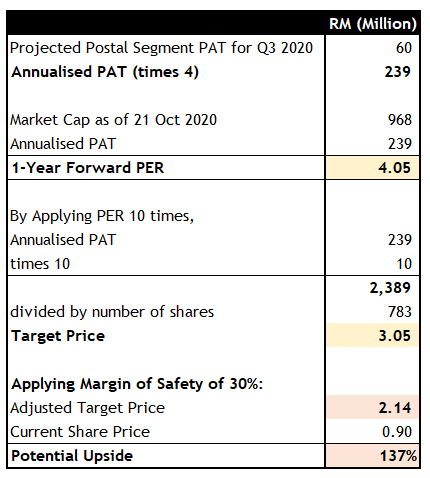 To be conservative, we are just going to assume that the other divisions combined make a grand total of zero profit, and only use the “Postal” numbers.

Make no mistake, these growth in earnings are not a one-time show.

This turnaround and success happened when the 2 years of hard work from POS Malaysia and the new CEO Syed Najib to make the company more efficient, automated and increase sales channels, meets an unprecedented opportunity, ie the COVID 19 crisis which caused an E-Commerce boom.

As people realize POS Malaysia have turned around and is going to record increasing profits due to the accelerated growth of E-Commerce, there will be significant price appreciation. In addition, whether got MCO or not MCO, COVID or no COVID, POS Malaysia is expected to continue growing at an accelerated pace.

And it was a RM3 company when the new CEO first came in, and it is a far better and far more profitable company today than it was then.

And, One Last Thing.

Is it priced in? Other than the brief pop back in April-May 2020, which affected all stocks, it has only gone down since then and is way below its Dec 2020 closing price of RM1.5, despite being projected to make more money in Q3 2020.

Clearly the market still thinks this is some random GLC that is inefficient and going to suffer (or even potentially go bankrupt like MAS) for the next 1 – 2 years.

It had unfortunately shot up a bit due to the SMS from the government, which resulted in people turning their eye to the logistics industry.

However, I don’t think most people understand the full scale of how much better POS is doing to do. Most of the facts I have written above have not been priced into the stock at all.