“We are plugging in an aggressive target for growth in FY21; and overall growth should be in the double-digits. I won’t put an exact figure now, ” said managing director and president Chew Ne Weng.(pic)

“We are plugging in an aggressive target for growth in FY21; and overall growth should be in the double-digits. I won’t put an exact figure now, ” said managing director and president Chew Ne Weng.

QES, which is in the semiconductor industry, makes inspection, measuring, automatic handling equipment for the wider industry.

“We have two divisions, which is distribution and manufacturing. The distribution side is generally very stable so we get about 8% to 10% growth, and that is considered very good. Whereas for the manufacturing side, we’ll try to double up, ” Chew told StarBiz.

“When you add the distribution and manufacturing side’s growth it should still be at double-digits, ” Chew said. 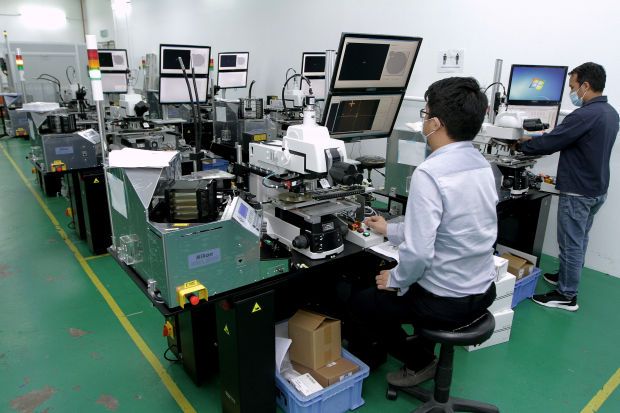 He said that growth would be driven by additional manufacturing capacity as well as new markets in China and other areas.

“These are in the pipeline but we are already seeing some results coming in. This is a good indicator of the traction (we have).

“The production capacity will be doubled. My existing facility is already full and running up to the neck.

“We can now make about 60 machines a year, and with the new place we will be able to make 120 machines per year. It’s a low volume and skill based business, ” Chew said.

“All these processes used to be done manually. Now it is becoming automated in semiconductor factories such as the integrated circuit (IC) chip makers. We distribute materials and consumables to the semiconductor value chain, ” Chew said.

Semiconductor chips are increasingly being used in industries these days such as the automotive industry as the latter progresses towards a fully self driven vehicle.

According to Chew, the other developments which are driving demand for semiconductors include the Internet of things, 5G adoption and smart manufacturing.

“These are all driving the demand for IC manufacturing. It seems demand is strong as everybody is indicating there will be a huge growth in the semiconductor space, ” he said.

Commenting on the shortage of IC chips, Chew said that this is happening because of the US-China trade war.

“This is my opinion. If I am a company based in China, I will buy up all the inventory for IC chips because I will be worried if it really (trade restrictions) comes into effect then I won’t be able to get IC chips anymore, ” Chew said.

“If a carmaker would like to source for these IC chips to make their cars, there is a fear that it would not be available anymore. So they are stocking up. If a car needs an IC chip for the start button, if they don’t have that tiny part, they can’t continue with the entire production process.

“That is why some plants had to shut down for a week or two to ensure inventory for the IC chips comes back, ” he added.

Chew said the shortage appears to be concentrated in the automotive type of IC chips.

“The other types such as the generic, basic appliances for mobile phones: these are the radio frequency component ICs. There is demand but no shortage here unlike the semiconductor ICs, ” he said.