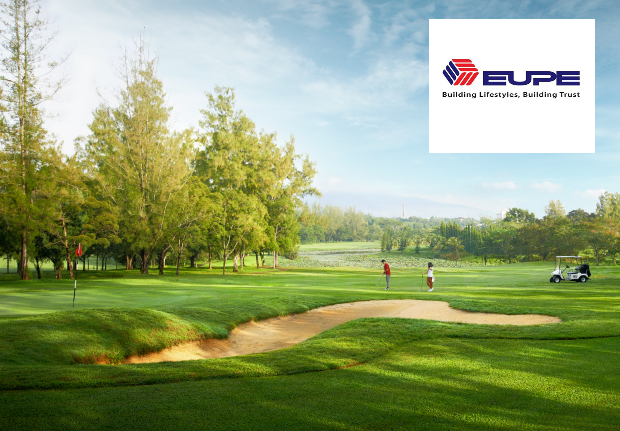 EUPE is a well-known property developer based in Sungai Petani, Kedah. It has multiple townships development in Sg Petani, Gurun & Padang Serai.

The most notable development is Cinta Sayang Resort & its township with a 18-holes golf course, hotel and water park.

In 2011-2012, it announced its plan to acquire lands in Puncak Jalil, Bangsar South & Cheras. The Puncak Jalil land deal which was meant for landed properties was terminated later.

At that time, I had some interest to invest in EUPE as I thought those high-rise projects in KL should carry higher GDVs which would boost its profitability significantly.

However, its first KL project "Novum@Bangsar South" which was initially planned for early 2013, has been delayed to Mac 2016, the time when property market went downhill.

Nevertheless, EUPE's venture into property development in Klang Valley is a successful one. 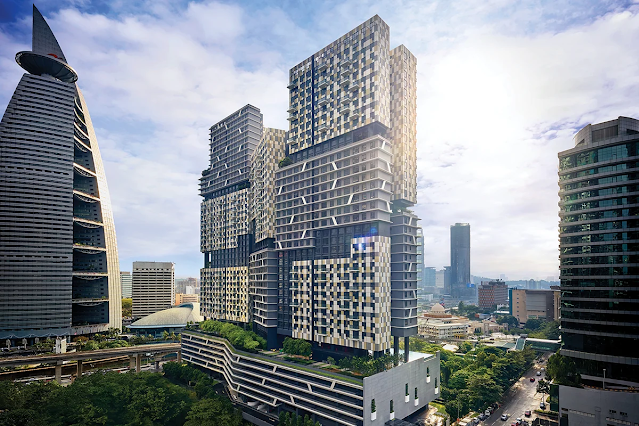 Since 2016 until today, EUPE has launched 3 projects in Klang Valley: 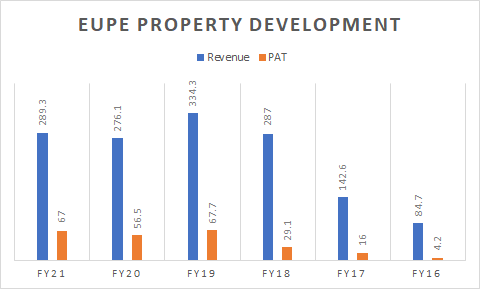 Its property segment in FY17 (from Mac16 to Feb17) saw a 4-fold jump in net profit to RM16mil, thanks to Novus (GDV RM568mil) which was launched in Mac16 and started construction in Oct16.
In FY18 (from Mac17 to Feb18), net profit almost doubled YoY to RM29mil as its second KL project Parc3 with GDV RM495mil was launched in Oct17.
The following year of FY19 (from Mac18 to Feb19) was a record year with net profit of RM67.7mil, as the construction progress of both KL projects contributed in full steam, as well as a "special" gain from development in Northern region.
Subsequently in FY20 (ended Feb20) & FY21 (ended Feb21), both KL projects continued to support the net profit in property development segment at RM56.5mil & RM67mil respectively.
Novus has been completed in mid 2020 and it won't contribute to its top & bottom lines from now on. So we can expect a drop in its profit as seen in latest quarter of FY21Q4 (ended Feb21).
However, EUPE has recently launched Est8@Seputeh adjacent to Mid Valley (GDV RM575mil) just in time to replace the loss of revenue from Novus.
Est8 achieved 30% booking in one month as only one of the two blocks are open for sale. If this encouraging trend continues, and there is little loan rejection and the SPAs are signed by end of May this year, then it might be able to register some revenue and profit in FY22Q1. 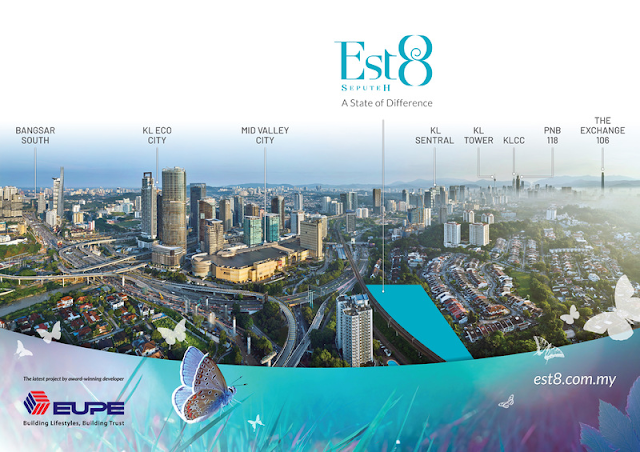 How well was EUPE's share price performing during its golden period between 2017 and 2020?
Besides property development, EUPE has other business segments such as property construction, chalets & golf management and others. Unfortunately all those segments are loss-making in the last 4 years.
The bar chart below shows overall revenue, PATAMI & EPS of EUPE in the past 6 financial years. 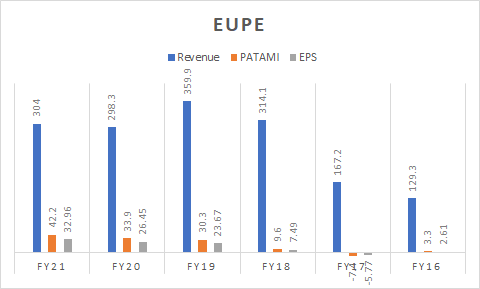 Even though KL projects has started to contribute significantly in FY17, the group suffered loss in that year, due to big losses in property construction & resort management.
In FY18, EUPE achieved PATAMI of RM9.6mil (EPS 7.49sen), much lower than RM29.1mil net profit from its property development segment, as 50% of profit from Novus went to non-controlling party, apart from being continuously dragged down by loss-making segments.
At that time when the full FY18 result was announced (Apr/May18), its share price was approximately 80-90sen, which gave it a PE ratio of 10-12x which was quite "normal". 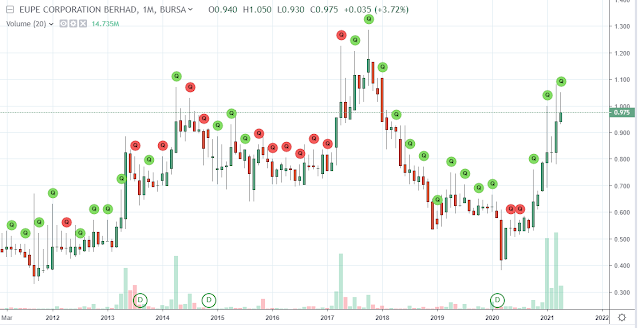 For FY19, the group's EPS triple jumped to 23.67sen as contribution of KL property development increased. However, its share price dropped to 60-70sen instead, which gave it a PE ratio of merely 2.5-3.0x.
Its EPS in FY20 improved further to 26.45sen but its share price plunged further to around 40-50sen in Apr-May20, mainly due to Covid-19.
In most recent FY21, its EPS continued its uptrend for 4 years in a row to 32.96sen. As property stocks made a comeback since the end of last year, EUPE's share price appreciated 100% from 50sen to RM1.
Even at current share price of 96sen, its latest actual PE ratio still stands at only 3x.
Why does the market give EUPE such a ridiculously low PE? Do investors foresee that its revenue and profit will drop in the future, or is it because it did not pay dividend?
EUPE did not pay dividend since year 2014 until Feb 2020 when it paid 1.5sen per share. The payout ratio was merely 5.7% from its FY20 EPS of 26.45sen.
According to its most recent FY21Q4 quarter report, the construction progress of Parc3 is "nearing completion", resulting in lower revenue in property development compared QoQ.
From the photo available online, the structure framework of the whole building of Parc3 seems to be completed earlier this year. I guess it might have achieved ~60% of its construction stage by now. VP might be achieved by the end of this year or early next year.
If this is true, then Parc3 will have about RM200mil sales to be recognized as revenue in FY22. If net margin is 20% and minus the non-controlling interest, net profit can be RM28mil from Parc3 alone in FY22.
So I think it's mainly Parc3 that will support its FY22 results while the newly-launched Est8 will contribute a bit, depending on its sales and construction progress.
Parc3 and Est8 are better than Novum because Novum is just 50% owned while the other two are 70% owned.
Besides, EUPE still has a piece of 2.84 acre leasehold land in Petaling Jaya South acquired in mid 2019. This land is 100% owned by EUPE!
It is fronting the New Pantai Expressway (NPE) near Bandar Sunway according to the circular. So I think it might be somewhere near NPE toll over there.
This PJ South project known as "Habitat" is planned to be launched in the second half of 2021. It's a bit disappointing that it has a lower GDV of RM227.8mil probably because the location is not as good as the previous 3 projects.
IF EUPE successfully launches both Est8 & Habitat this year as planned and the take up rate are high, then it will be super good and I expect a record year in its FY23.
However, it will run out of landbank in Klang Valley after that. 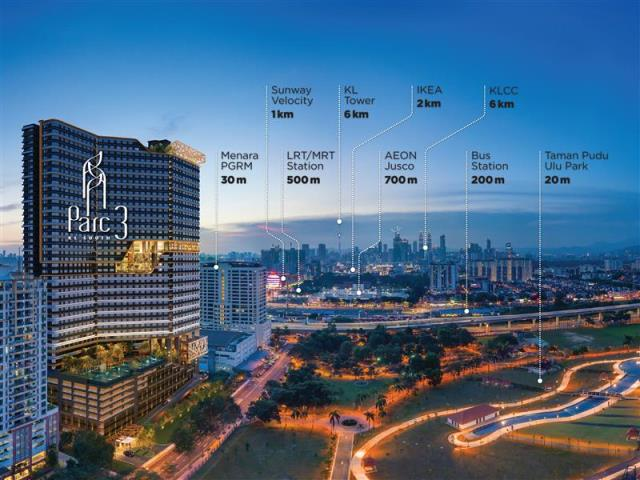 From its latest balance sheet ended Feb21, its gearing ratio has gone down tremendously to just 0.01 from 0.40 a year ago. This will position it well for future landbanking activities in the Klang Valley.
It paid out as much as RM49.7mil as dividend to non-controlling interest in FY21 while not paying a single cent to common shareholders in the same year.
It only paid RM1.92mil dividend to common shareholders in FY20 (1.5sen per share). Is it part of the reasons for poor share price performance?
If it pays out 30% of its net profit in FY21 (EPS 32.96sen) as dividend to common shareholders, it will be 10sen dividend. At share price of RM1, this is a 10% dividend yield.
If this is the case, its share price will be easily RM2 by now.
No one will disagree that EUPE is currently very much undervalued at a PE of 3x at share price of around RM1. Its latest net asset per share is at RM3.08.
The question is: can its revenue and profit growth continue into FY22?
EUPE does not reveal its target sales, new sales & unbilled sales so it's not easy to predict its revenue and profit.
To me, further growth is not easy, although it can still register good results in FY22 (guesstimated EPS at least 20sen) which still makes it "undervalued".
In short to medium term, it depends on the take-up rate of Est8 and Habitat. Can both of them sell as well as Novum & Parc3 in current pandemic hit but HOC period?
The longer term prospect of EUPE will definitely depend on how many lands it can replenish and whether the locations are good.
Apparently property developments in Kedah are still on-going and achieve higher profit margin recently as stated in its latest quarter report.
Unfortunately, those "more affordable projects" in Northern region are rarely mentioned and are not visible in its official website. Its website only shows high-end luxury properties in Sg Petani & Klang Valley.
Another listed property developer Matrix posted good results with decent growth in revenue and profit, paid excellent dividends consistently and has vast landbanks. Despite all these, its PE ratio is always around 6x in the last few years.
So, with possible profit decline in FY22 and possible recovery in FY23, what is the PE ratio that we should put on EUPE?