Home bursadummy My Portfolio May21 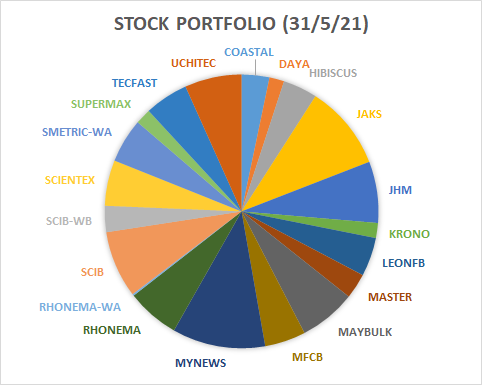 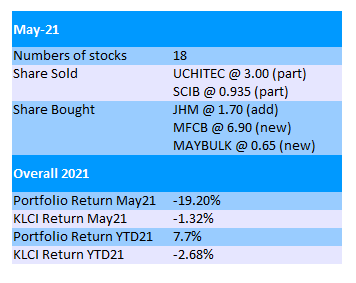 Portfolio @ End of May21 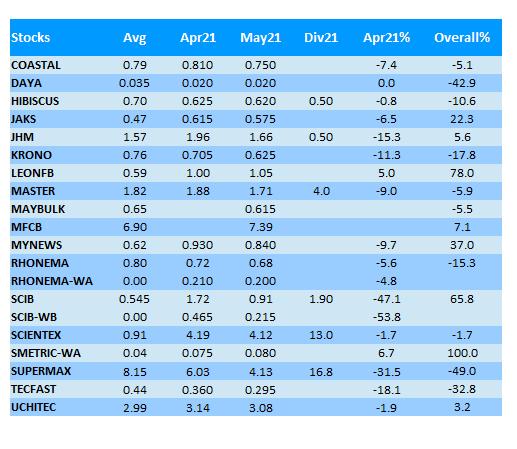 Due to the slump in SCIB share price, my portfolio suffers its heaviest loss in one month at -19% since losing 21.7% in Mac20.

SCIB was my major holding and made up ~40% of my portfolio. It has contributed massively to my portfolio gain this year but now I have to vomit out those gain.

The big news in the stock market in May should be none other than Serba Dinamik's audit issue.

Serbadk first announced its intention to appoint an independent firm to commence a special independent review on its accounting matters raised by external auditor KPMG on 25th May 2021.

It's then followed by a public holiday, 2 days of trading suspension and 2 days of weekend.

When trading resumed on the 31 May, its share price straight away limited down.

While the trading of Serbadk was suspended for 2 days, the share price of its related companies SCIB and KPower have already suffered.

Even though SCIB and KPower share the same major shareholders with Serbadk in Dato Mohd Abdul Karim, Dato Abdul Karim is a non-executive chairman and is not involved directly in day-to-day operations of both companies.

SCIB obtained some contracts directly from Serba Dinamik and certain contracts in the Middle East might be related to the "influence" of Dato Abdul Karim.

KPower on the other hand, doesn't seem to have such relation in all their contracts secured.

Personally I have confidence in Dato Abdul Karim so I chose not to sell my SCIB shares in the first 2 days.

However, I don't feel easy with Serbadk's explanation in its reply to Bursa query on 28 May and its request to change auditor.

I think I have to reduce my risk so I decided to sell part of my SCIB shares, as it carries 40% weightage in my portfolio.

An ordinary investor like me will not know what is going on behind the scene. What I can do is just to manage my risk and wait for the outcome in 2-3 months time.

The fact that Dato Abdul Karim and the second largest shareholder Datuk Abdul Kadier purchased 5 million shares of Serbadk each from open market might provide some confidence to its shareholders though. 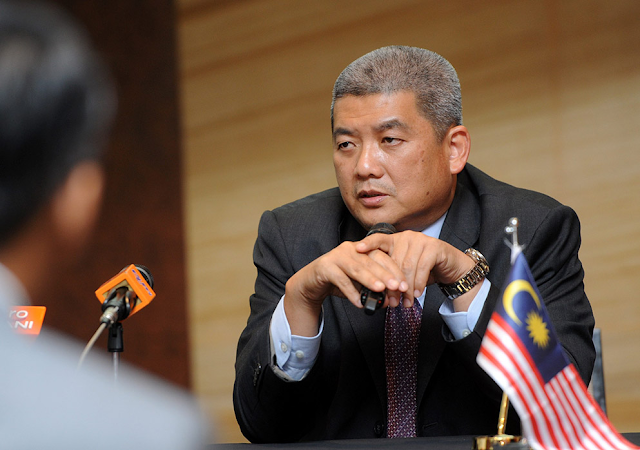 The whole month of May is about record-breaking Covid-19 cases and death. We have our MCO 3.0 and then suddenly the FULL MCO.

The stock market reacted negatively to those news especially after the Hari Raya holidays when the number of Covid-19 cases jumped over 6,000 cases per day.

I took the opportunity to add two stock into my portfolio which are MFCB and Maybulk.

MFCB is always in my watch list but I chose Jaks over it last year because I thought that Jaks has higher growth potential.

However, I can't overlook the fact that MFCB is a super cash cow. When you have lots of cash, there will be lots of opportunities and possibilities.

Stenta is a flexible packaging film manufacturer based in Bangi. It seems to be a growing company with net profit increasing from RM8.2mil in 2018 to RM12.2mil in 2019 and RM18.0mil in 2020.

I believe that its packaging business will grow but it won't contribute too significantly to its overall profit. The commencement of the work on the 5th turbine of its hydropower plant in Laos should be able to raise its profit more significantly.

As for Jaks, its profit sharing from the Vietnam power plant at RM29.8mil in FY21Q1 is exactly what I predicted.

The power plant might contribute a net profit of RM140mil to RM150mil to Jaks annually.

Nevertheless, its overall profit is dragged down by losses in its construction and property investment arms.

Jaks has just announced private placement of up to 20%. Sadly there is no mention about the fund to acquire another 10% of Vietnam power plant.

It's not unexpected that its share price dropped after the private placement announcement. I believe that it can still be a little cash cow in 2-3 years time.

I invested in Maybulk because I think that dry bulk shipping industry has just started its next upcycle. 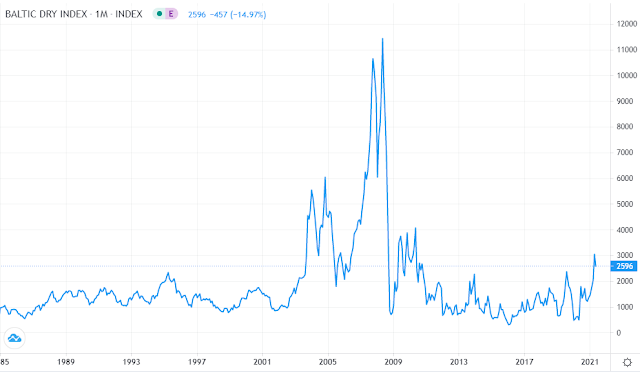 As we can see from the Baltic Dry Index (BDI) chart above, BDI has recovered from 400 points in early 2020 to over 3,000 points recently.

BDI is an index of average prices paid for the shipping of dry bulk materials such as iron ore, coal, steel, grains, sugar, cement etc.

The golden era for bulk carriers companies was during 2004 to 2008, which was more than 10 years ago.

Many companies rushed in to order new ships at that time and this has resulted in oversupply of ships and subsequent crash of shipping rates.

Now, the demand for commodity is expected to pick up as after China, most western countries are recovering from the pandemic.

Moreover, the orderbook of new dry bulk carriers is at its all-time low at the moment, as shown in the graph below. 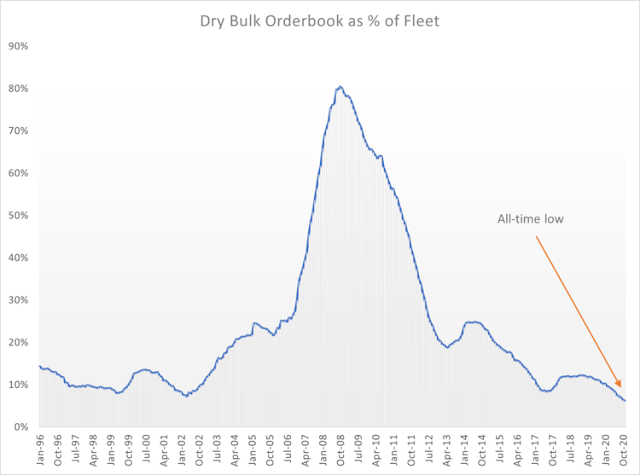 As a result of high demand and low supply, shipping rates of dry bulks shot up since last year.

Currently Maybulk just operates 8 bulk carriers (3 Kamsarmax, 3 Supramax, 2 Handysize) with one of the Handysize committed for sales, compared to 14 vessels during the peak period of 2008.

Even though the BDI corrected from 3,200 points to 2,600 points in May, average time charter rate of Supramax actually went up higher. 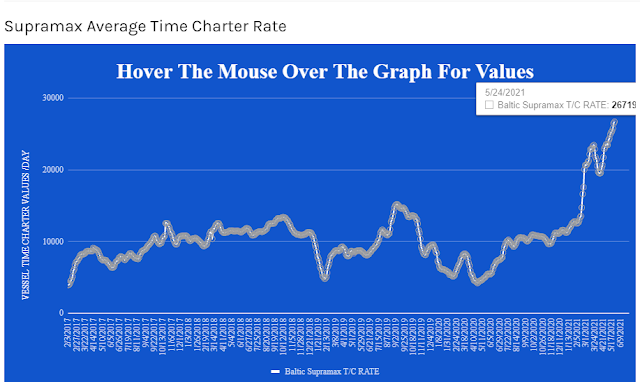 I have used up most of my cash to purchase MFCB and Maybulk, so I need to sell something to replenish my cash level.

I sold some Uchitec shares as a result, since it carries higher percentage in my portfolio.

Uchitec has reported its best ever Q1 result, with an improvement of 25% in net profit from previous best Q1 last year.

The management predicts a high single digit revenue growth for this year, so overall it's good.

First Solar's second Series 6 factory in Malaysia has started operation in Q1 and Master should expect better sales to this major customer in subsequent quarters.

It exceeds my expectation even though I already expected a better quarter after seeing the excellent results from other midstream steel companies.

As for Coastal, it has not delivered a single OSV for 12 consecutive months now. Its recent FY21Q3 profit is supported by long term JUGCSU charter contract & forex gain as expected.

Nevertheless, cash flow wise it's still solid and I'm waiting for news of its JV project in Mexico.

Both Hibiscus & Rhonema posted good quarter results in my opinion, with the latter achieved its best quarter net profit in 3 years.

With Brent oil price hovering between USD60-70 in April and May, its average selling price for the quarter of Apr-Jun 2021 should be able to reach USD65.

Hibiscus has just announced the acquisition of producing assets in Malaysia & Vietnam from Spanish Repsol for USD 212.5mil cash.

This is what I've been waiting for and I take it positively even though the detail of the acquisition is still pending. 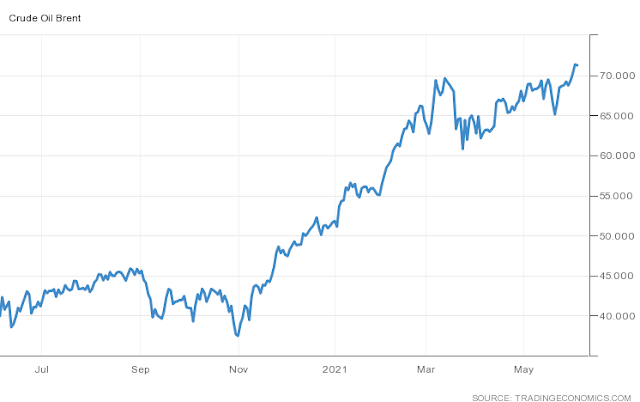 Techfast's result is a bit disappointing to me. The revenue contribution from its oil bunkering segment is lower than expected.

I expect higher activities in oil bunkering business since shipping industry seems to have a good time.

Recently the management mentioned that they have just started to supply 10,000 tonnes of marine fuel oil per month to Wise Marine in April from the contract signed in mid March.

Hopefully the profits from the big contracts and associate company CCK can cover the small loss from disposal of its subsidiaries in the next quarter.

Yesterday Techfast announced another supply agreement with Wise Marine to supply not more than 20,000 tonnes per month of marine oil for 3 years worth RM1.46bil.

Techfast has to secure a substantial amount of cash or borrowing to purchase the tanker but does not need to spend to operate it and bear the depreciation charge. It will get monthly payment based on the future agreement after the purchase of tanker.

Is it good for Techfast? Frankly I'm not too sure. It seems like the proposed right issue will be used to purchase an oil tanker that it will not own but something like "lease" to JV partners to generate consistent monthly income, without the need to worry about the depreciation charge of the tanker. 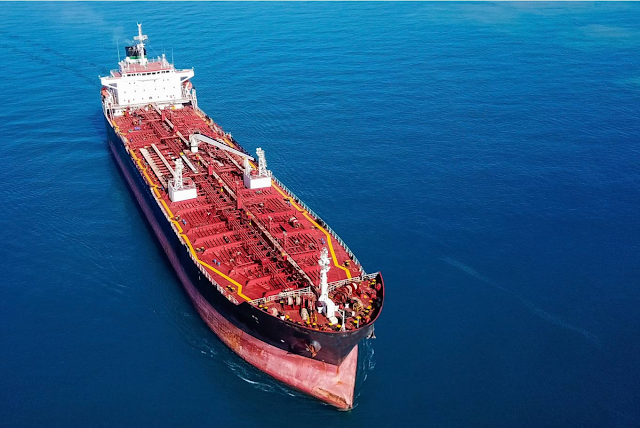 Currently I have 18 stocks in my portfolio, which is I think the most I have at any point of time.

I always mention that I want to keep it below 10 and I still plan to do so.

I have already decided earlier to trim my portfolio but declining share prices of those stocks prevented me from doing so.

Anyway, I learn that the number of stocks is not that important. The more important is to have a core portfolio of 1 or 2 high potential stocks.

If the core portfolio can perform well, then the whole portfolio will look good.

After selling SCIB shares on top of the substantial decline of its share price, I have no stock in my core portfolio at the moment.

Currently I still don't have any candidate to be promoted into my core portfolio. The closest one should be myNEWS.

I regretted not topping up myNEWS when its share price dropped below 80sen in May. I thought that MCO 3.0, high Covid-19 cases in the Klang Valley and upcoming poor quarter result in June will dampen investors' interest in it.

Overall May21 is the worst month in stock market investment for me, even worse than Mac20.

In Mac20 during MCO 1.0, I have lots of cash in hand as I have sold most of my shares in Feb20. I was not too worried about market crash at that time.

This time it's different. It's a crash of a single stock that happens to be the only stock in my core portfolio.

As for the MCO 3.0, I don't think it will have too much negative impact on the stock market.

I saw that in Europe, English Premier League has allowed 10,000 football fans into the stadium in their final home matches, and UEFA Champion League Final saw more than 14,000 fans in attendance.

In the US, most of the NBA teams have allowed more than half of the capacity and are considering to allow full capacity in their stadium.

So, no matter how bad it was, the pandemic will be over and we will get back to normal life soon.

For Malaysia, even though we have been badly hit recently by the 3rd wave, our vaccination program will be accelerated significantly from June onwards as private clinics and medical centers will start to provide Covid-19 vaccination to the public.