The steel price chart below shows that steel price has gone up from 3,750 to 5,835, 50% increase in the last 12 months due to various reasons. One of the reasons is that China has been the world largest steel exporter before and it has stopped exporting because it wants to reduce the use of coal to produce steel to improve its air quality and environment.
Covid 19 shut down

Hiap Teck reported revenue Rm 164.8 million and EPS 4.26sen for the quarter ending July. Its previous quarter ending April, revenue Rm 329.6 million and EPS 4.79sen. Its revenue has dropped about 50% but its EPS has dropped only about 12% despite of its factory in Kelang was shut down for 2 months and its associate Eastern Steel plant in Treggannu was shut down for 1 month.
Covid 19 cases is reducing:

Currently 44.6 million doses of vaccine were injected to 20.7 million people which is 64% of our population. 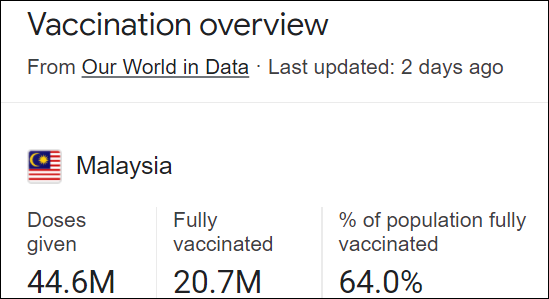 From next month, there will no more MCO lock down and people will be free to move about. Based on the above facts, Hiap Teck should be able to report much better profit in the next few quarters.

Based on current prices, Hiap Teck is the cheapest stock among all the steel producers in Malaysia as shown on the comparison below.