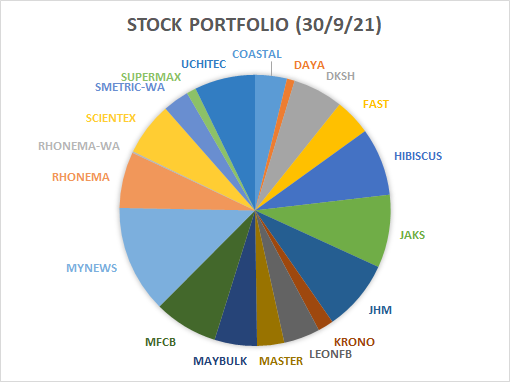 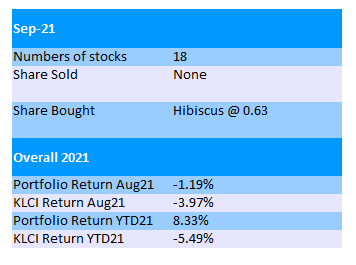 My Portfolio @ End of Sep21 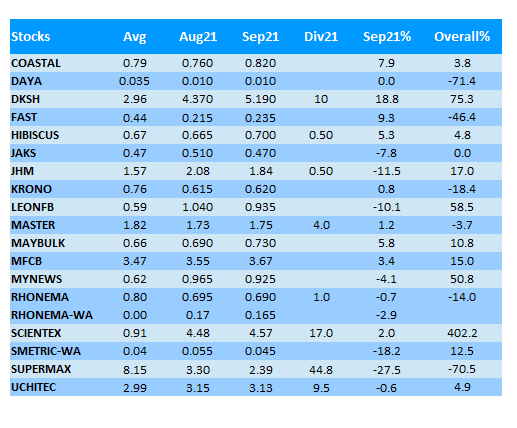 The performance of the stocks in my portfolio in September is mixed, with nine gains and nine losses.

Overall my portfolio lost 1.2% in this month.

The worst performer is Supermax which suffered a 27.5% drop. I didn't follow its share price closely and was actually quite shocked to realize how low it has gone.

Nevertheless Supermax has a 15-sen dividend ex-ed in Sep21.

Even though I don't have a lot of Supermax shares, it's still a disappointment to me.

On the other hand, the best performer is DKSH which gains 19% but I also do not own a lot of its shares.

I just made one transaction this month which was a top-up of Hibiscus shares. With that, my average price has been brought down a bit to 67sen.

Brent oil has reached USD80 per barrel now. I guess Hibiscus should have a very good second half of 2021.

The completion of Repsol assets acquisition at such high oil price environment should be a big boost to Hibiscus. 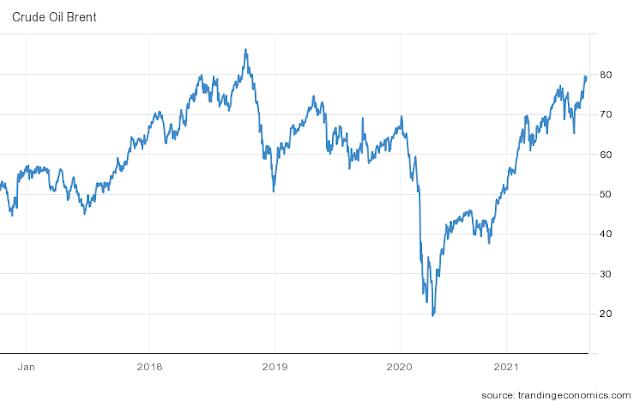 There are quite a lot of quarter results release in September which include Coastal, Jaks, JHM, Krono, LeonFB, myNews & Scientex.

There is not much surprise besides JHM.

Even though JHM achieved its best quarter profit (PBT RM11.3mil, PATAMI RM9.3mil) in 2 years, there was one-off gains amounting to RM6.2mil.

It's well below my expectation and the drop in its share price subsequently did affect my overall portfolio significantly.

Anyway, I still think that JHM has a good future ahead. Hopefully it can bounce back in the second half.

The deepening loss of myNews in FY21Q3 is somewhat within expectation.

Our country's Covid-19 cases surged past 10,000 cases per day for the first time in early July. Klang Valley was the most badly hit area and myNews has 80% of its business in this region.

The number of cases grew steadily in July to surpass 20,000 cases per day in early August and seemed to reach its peak in the end of August.

During this period of time, myNews could not open more CU stores and it has closed down 16 myNews outlets.

The number of CU stores remains at only 4 with the fifth store is just recently opened at IOI City Mall. It will be a big challenge to open 30 CU stores this year as initially planned.

In early September, Covid-19 cases started to come down and it was around 12,000 cases per day at the end of the month.

Currently in early October, the number of cases has dropped to below 10,000 a day.

August and September should be worse for myNews and it will be not a surprise if its FY21Q4 profit drops further.

Jaks's Vietnam power plant contributed RM37.5mil share of profit in full quarter of FY21Q2. This means about RM150mil a year.

It's still below the estimated RM196mil per year from the similar Vinh Tan 1. Hopefully the figure can still grow in the future.

Overall result of Jaks has been negatively affected by slower construction progress and more importantly diminishing contracts on hands. Its Evolve Mall continues to bleed as expected.

However, there was an one-off LTIP expense of RM6.5mil in the latest quarter. Without this, its PATAMI should be around RM30mil instead of RM23.9mil.

It will work on its 50MW LSS4 project in the next 1-2 years but I don't think it will contribute any profit in this period of time since it's not an EPCC contractor of solar farm.

Cash flow is getting tight and recent ~10% private placement completed on 1/7/2021 came in time to ease the pressure.

There might be another 10% to go and that's probably one of the reason its share price suffers.

I hope that JHDP will start to pay dividends to Jaks next year. If everything is stable, I think Jaks should receive more than RM100mil cash per year. 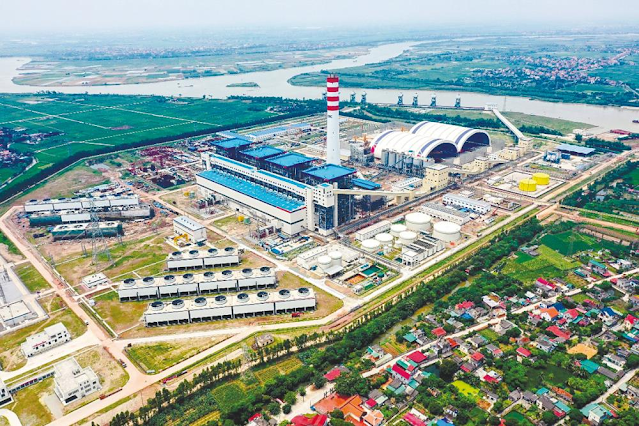 The results of Coastal and LeonFB are not bad at all. Both are expected to post good results but not better than their immediate preceding quarters.

Its PATAMI of RM19.3mil (EPS 3.68sen) is not too far away from RM23.1mil last quarter, despite a RM4.1mil impairment loss on receivables in current quarter.

Its total borrowing has been pared down from RM276mil to RM91mil in one year's time.

Coastal has not sold a single OSV in more than a year now. If a car dealer sell zero car in one year, surely it will close shop.

Nevertheless, Coastal has been saved by the management's decision to diversify into JUGCSU chartering business which generates consistent cash flow during this difficult time when OSVs are oversupplied.

I'm not sure whether competitors have snatched OSV orders away from Coastal. If not, sooner or later Coastal will surely start to build and sell high-end OSVs again, just like those years between 2008 to 2016 when its net profits were RM100mil-200mil per year.

For LeonFB, it posted a very good result with PATAMI of RM32.1mil, just slightly lower than RM36.1mil in immediate preceding quarter.

Its single quarter EPS is already 9.76sen but its current share price is just 90sen. I can see that investors are mindful that gloves stocks "tragedy" might happen in steel stocks too. 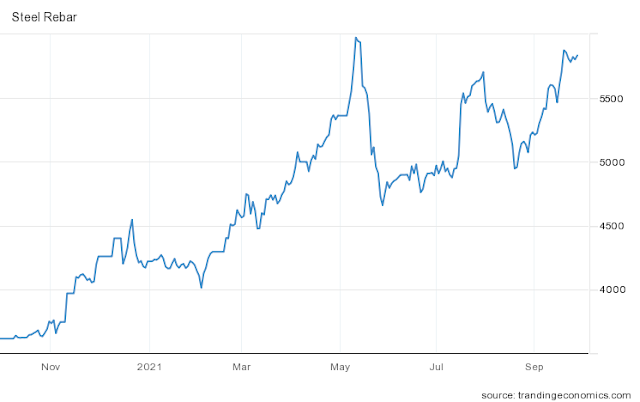 One of the concern for me is the share of loss of associate amounting to RM0.24mil in current quarter which I assume is from Quantum China.

This is its first loss of associate since the start of year 2020. It previously held 16.7% of Quantum China and has just completed the acquisition of its remaining shares on 26/7/21.

Lastly, FY21 is another record year for Scientex. It is its consecutive uninterrupted growth in revenue and profit since 2009 if not mistaken.

Scientex has proposed to acquire the remaining 38.1% shares of Daibochi and delist the latter. This might contribute to its continuous profit growth in FY22.

Currently more than 87% of adult population has been fully vaccinated and our attention has turned to adolescent.

There is no surprise that daily new Covid-19 cases has been trending down to below 10,000 mark.

Baltic Dry Index has broken 5,000 mark and I decided to keep Maybulk's shares for a longer period of time. It should deliver a super good result next quarter with high freight rate and vessels sales. 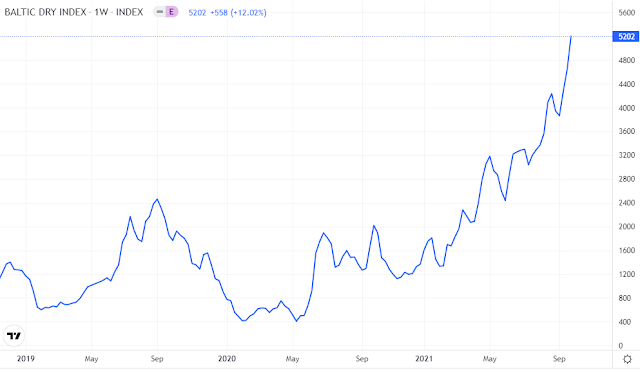 Most construction stocks have suffered enough since the Covid-19 pandemic. The government might not have enough fund to award infrastructure contracts during this period of time.

New projects that are very likely to start soon is the MRT3 (circle line).

Gamuda/MMC are the sure winner in MRT3 for its expertise in tunneling and underground work.

Besides Gamuda/MMC, Sunway construction, IJM construction, Mudajaya, Gadang and AZRB have been awarded contracts in both MRT1 & MRT2. Will they make it three in a row?

RTS link between JB and Singapore has already started. However, it's just a 4km line with 2 stations, and about half of them is located in Singapore.

Bandar Malaysia project might be delayed and the interest in HSR between KL and Singapore seems to be reignited after being cancelled earlier this year.

I think both should not be ready to kick start next year.

Time flies and we're already in the final quarter of 2021. I'll be happy if my portfolio can end this year in green.