KUALA LUMPUR (Nov 17): Inari Amertron Bhd is set to be added as a constituent of FBM KLCI, while Hap Seng Consolidated Bhd is likely to be dropped from the stock market barometer as the latter fails to meet the liquidity criteria.

Inari is at the frontrunner to be included in the KLCI index in the next review as it is the highest market ranking company among the non-KLCI constituents with a market capitalisation of about RM15 billion, according to CGS-CIMB analysts Ivy Ng Lee Fang and Nagulan Ravi.

“This would be the first time a technology company is represented in [the] KLCI index and that could help [catalyse] Inari’s share price,” they said in a strategy note dated Nov 16.

Shares of Inari had risen four sen or 0.98% to RM4.14 as at the time of writing, giving the semiconductor player a market capitalisation of RM15.28 billion. The stock has climbed 52.21% year-to-date.

This is followed by Westports Holdings Bhd, whose market capitalisation is about RM14 billion, the analysts noted. Westports was unchanged at RM4.24, valuing the group at RM14.46 billion.

FTSE Russell is due to announce the results of its upcoming semi-annual review of FTSE Bursa Malaysia Index Series on Dec 2, 2021.

The review will use the market capitalisation data at the close of trading on Nov 22 and all constituent changes in the review will take effect on Dec 20.

“Our analysis suggests that HSC (Hap Seng Consolidated) has only met this criterion in six out of the past 11 months. As such, it could be removed from the KLCI index in the upcoming review, and be replaced by the highest market cap ranking company that is presently not included in the index as of Nov 22, 2021,” said the analysts.

Apart from market capitalisation criteria, companies will need to satisfy free float (share capital of the company that is freely available for trading) of 15% or more, and a liquidity screening test to qualify for KLCI inclusion.

As of Oct 29, CGS-CIMB noted that the banking sector had the largest weightage on the KLCI index at 35.3%, followed by the telecommunications sector at 11.7%, and the food and beverage sector at 11.6%.

Since the last KLCI review date on Nov 23, 2020, Top Glove Corp Bhd, Hartalega Holdings Bhd and Sime Darby Plantation Bhd were among the KLCI constituents that posted the largest declines in market capitalisation. 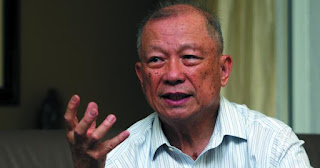