On January 07, 2022
EDEN (7471) EDEN INC BHD  on the look out with previous low key investor entry from Widad and Dataprp


For latest information, can join us at

Blog https://targetinvest88.blogspot.com
Telegram https://t.me/targetinvest88
Will year 2022 be a good time for KLSE equity market? This question is for anybody to guess.
Want to share something that might be of your interest if you are an investor / trader that follow personality investing. Personality investing is a style of investment that follow a person where he had some good touch where stock can be moving up in aggressive formation after a while.
EDEN INC BERHAD (EDEN - 7471) could be a good candidate with a key touch of entry from Dato Wee Cheng Kwan. 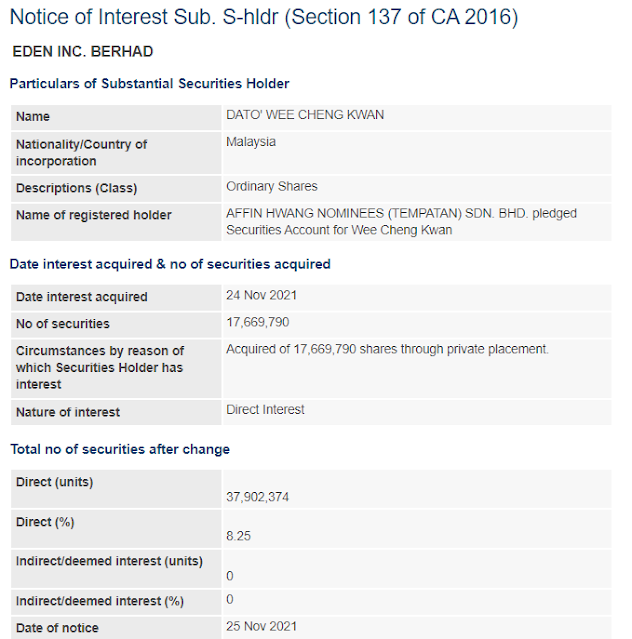 Dato Wee Cheng Kwan entry into Eden at RM 0.12 for a stake of 8.25% is through private placement. The transaction is done on 24th Nov 2021.
To recap, EDEN is a company that is dealing with utilities (electric provider in Sabah) and also F&B business in Langkawi. However, the prime asset that EDEN is sitting on is the lucrative big industrial land in Pahang, which is near to Kuantan Port.
Partial of the land is being sold back to the government for the building of ECRL track which will cross through Pahang.
If EDEN is successful in monetizing the land asset through asset disposal, or joint venture from foreign MNC to build and operate factory, that will see EDEN making a windfall cash from the process.
So who is Dato Wee Cheng Kwan ? How is his past track record on his magical touch of hand? 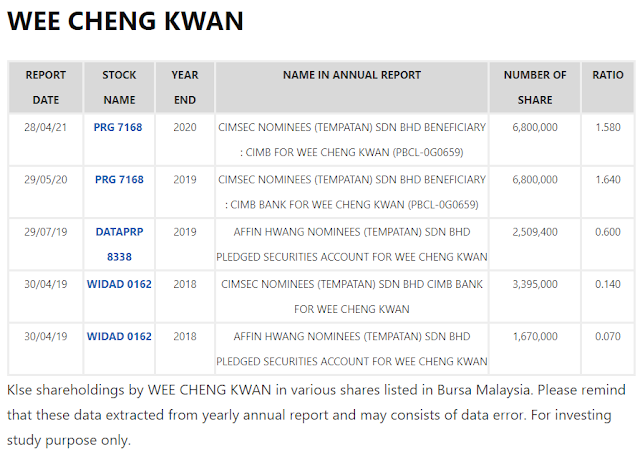 Now with the entry of EDEN at an all time low of RM 0.12, where can we see the landing of EDEN in the next 6 months? Currently, the technical chart would suggest that EDEN is already touching resistant line and might be ready for break out run above.

Can the magical touch from Dato Wee Cheng Kwan come again on EDEN ? Will EDEN be flying high like Widad to 80 cents or like Dataprp to RM 4.00 ? That is for anybody guess for now.

IMPORTANT NOTICE
Please be informed that I am not a professional or certified analyst. I am not a licensed consultant, just a normal retail investor. I am just sharing my ideas and opinion on the market outlook. Any company mentioned should not be interpreted as a buy/sell/trade call. Please do your own research and buy/sell/trade at your own risk.

For latest information, can join us at