Market Recap: Top gainers and losers on Bursa in 2022

IT has been another eventful year for Bursa Malaysia, as the nation began transitioning to the endemic phase of Covid-19 on April 1 amid global headwinds such as high inflation, rising interest rates and geopolitical tensions.

The local market — along with other Asian bourses, with the exception of Singapore’s Straits Times Index — is ending the year in negative territory. The FBM KLCI had lost 5.7% year to date (YTD) to 1,478.54 points on Dec 16 compared with the STI’s gain of 3.7%.

Unlike 2021, Bursa’s lower trading volumes and values underscore reduced retail interest as investors may have opted out of the market following the sharp correction in the share price of glove makers and technology companies, as well as weaker YTD performances.

It is noteworthy that all key indices on Bursa had posted negative returns YTD (as at Dec 9, 2022) due to diminished interest from retail investors and net selling by local institutional investors, it adds.

Relative to the other sectors, the energy and finance sectors have outperformed.

“The energy sector registered YTD returns of 10.5% (versus the FBM KLCI’s -5.8%) due to improved earnings prospects of energy players on higher oil prices. The finance and plantation sectors, in second and third places respectively in terms of returns, trailed the market leader with single-digit gains of 6% and 2.7%. Banks are expected to benefit from the rate hike cycle, while the plantation sector gained from improving crude palm oil (CPO) prices due to the disruption to the sunflower oil supplies from Ukraine. Another interesting point to note is that the property index is on track to post five consecutive years of losses, which is unprecedented, suggesting that market sentiment for the sector is low,” says CGS-CIMB Research.

The Edge takes a closer look at this year’s top winners and losers, which have been grouped according to market capitalisation. There are 33 companies in this category.

Sime Darby Plantation Bhd (+32.9%) also emerged as a star performer in a sector saddled with severe labour shortages over the course of the pandemic, while major poultry player QL Resources Bhd (+23.8%) saw high demand across its business segments.

It is worth noting that AMMB Holdings and QL Resources were included in the FBM KLCI 30-stock benchmark index on Dec 19, replacing Top Glove Corp Bhd and Hartalega Holdings Bhd, glove makers whose shares have been under selling pressure for most of 2021 and 2022 as the threat of Covid-19 subsided amid rising vaccination rates globally.

Among the top losers were telecommunications companies Axiata Group Bhd and Maxis Bhd, which fell by 26.6% and 19% YTD respectively.

IHH Healthcare Bhd was the second top laggard, having dropped 20.2%. 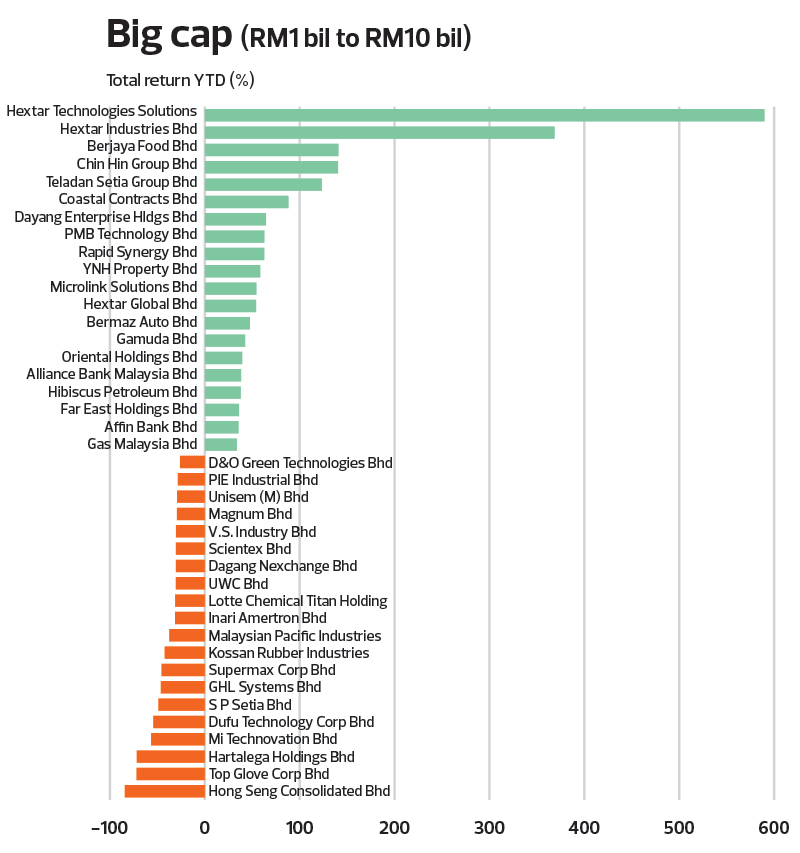 Over at the big cap space, Hextar Technologies Solutions Bhd (+590%) emerged as the top gainer with a 6.7-fold increase YTD from RM2.51 to RM16.80 as at Dec 21. In an announcement, Bursa drew attention to the recent sharp rise in the price of Hextar shares, and the unusual market activity queries issued to the company on Oct 19 and Oct 31. Hextar, in response to the queries, said it was not aware of any corporate development or explanation that could have led to the unusual trading activities.

Top Glove, which has been in the red for two consecutive quarters, said it expects at least another loss-making quarter ahead, before it can return to profitability — probably in the next nine to 12 months — amid a persisting supply glut that has sent prices tumbling to their “lowest in history”. Another top gainer was Classic Scenic Bhd (+72.5%), in which businessman Eddie Ong surfaced in March last year as a new major shareholder with a 29.98% stake — 15.04% directly held and 14.94% held through Hextar, then known as Complete Logistic Services Bhd.

In July this year, Ong consolidated his shareholding in Classic Scenic by acquiring Hextar’s 14.94% stake in the maker of wooden picture frame mouldings. Since July, Classic Scenic’s share price has gained 75.7% to close at RM1.16 last Wednesday, giving the company a market cap of RM286.21 million.

Top losers included PUC Bhd (-75.9%) — its share price tanking after it failed to attain a digital banking licence — and Country Heights Holdings Bhd (-78.5%), whose share price dropped sharply twice this year in March and May. The reason for the share price drops was unclear.

In May, Bursa slapped Country Heights with an unusual market activity query, alongside a spike in trading volume and its share price hitting limit down. The company, in response, said it was unaware of any corporate development that would have caused the sharp fall in its stock.